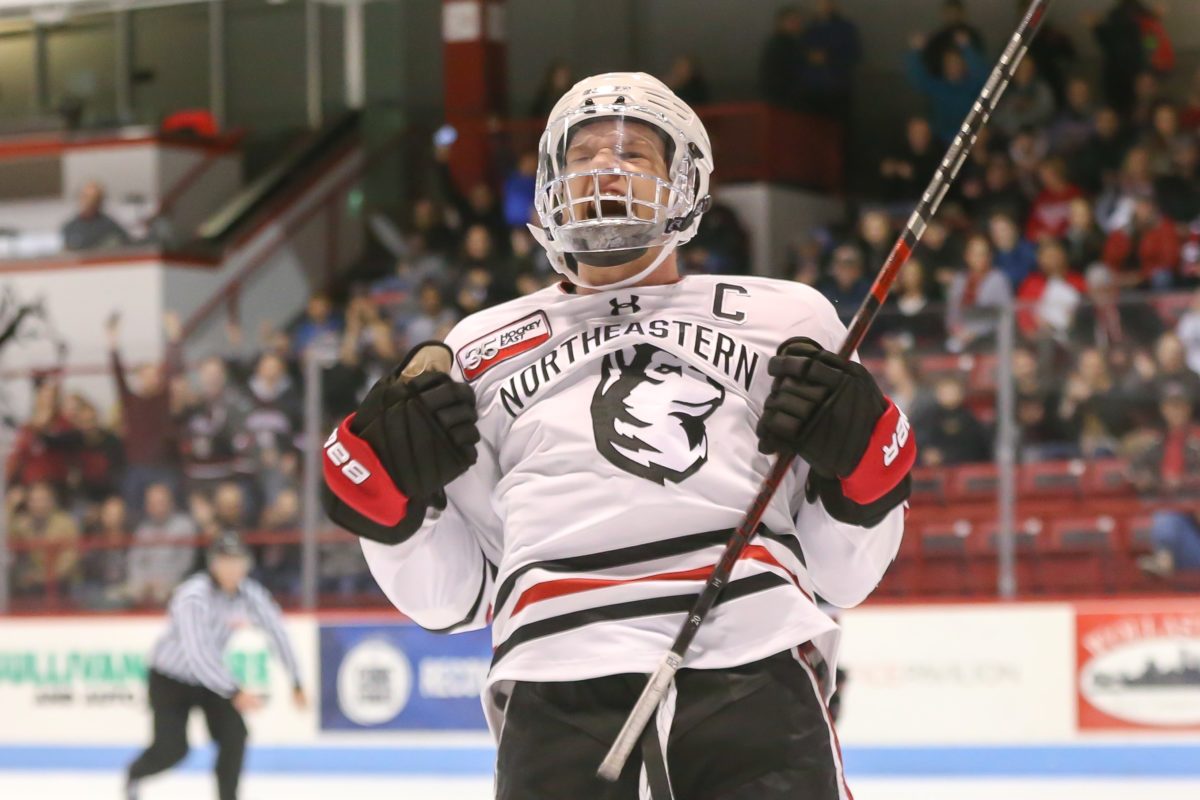 Durham, NH — Hockey East’s regular-season finale resembles a Mexican standoff. At weekend’s start, the second placed teams were separated from the eight placed teams by only five points. Two of those teams, Northeastern and New Hampshire, met on Friday night and combined for an offensive outburst with the Huskies outlasting their hosting Wildcats.

UNH started the game much stronger. Cayden Primeau stopped plenty of Wildcat attacks in the first ten minutes, but could not stop an in-tight shot by Brendan van Riemsdyk after an Eric MacAdams check forced a turnover deep in Northeastern ice. The Huskies staved off ensuing UNH chances and drew a Too-Many-Men-on-the-Ice minor. Jeremy Davies uncorked a wrister from above the right circle to tie the game before intermission.

The Wildcats started a goal-filled second with Marcus Vela tipping home a Benton Maass rip and van Riemsdyk cleaning up a loose puck on in the crease for his second goal of the night only 5:01 into the second. Minutes later, Northeastern clicked and returned to recent Beanpot form. First, Kohei Sato took an ill-advised delay of game minor and Liam Pecararo capitalized with a wrister from the right doorstep. Late in the frame, Patrick Schule took a hooking minor. Northeastern’s penalty kill found a chance to pounce and Matt Filipe took it. The junior from Lynnfield, MA, scored his seventh goal of the season and first collegiate shorthanded tally to tie the game. Liam Pecararo closed out the frame by cutting through the defense and scoring his second of the night to stake his Huskies to a 4-3 second intermission lead.

UNH weathered an early third-period storm when first, their own power play misfired again, then second, Will MacKinnon and Anthony Wyse took successive minors to give Northeastern 1:34 of skating five-on-three. The New Hampshire penalty kill, namely Liam Blackburn, hustled and fought to kill the minor time and mount a late assault on Northeastern’s net. Unfortunately, it wasn’t enough. Ryan Shea found space at the left blue line and blasted a knuckler over UNH goalie Mike Robinson’s head for a 5-3 lead. A few minutes later, with the goalie pulled, Liam Pecararo forced a turnover and deposited the puck in the empty net for his first hat trick and a 6-3 Northeastern win.

Pecararo, a senior from Canton, MA, and transfer from Maine, recorded not only his first hat trick but his first collegiate multi-goal game. Cayden Primeau recorded 33 saves on 36 shots faced for his 18th win of the season.

“After a very difficult first period, if it wasn’t for Cayden Primeau we’d have been behind by a couple goals” mused Jim Madigan. “I thought UNH was fast out of the shoot, and we weren’t moving our feet. We were playing slow and thinking slow. When we went down 3-1, I think things finally clicked in a little bit and our guys responded and started moving their feet, skating fast, and getting in on the forecheck and creating time in the offensive zone for us. We got some real timely goals. I thought our third period was the best. Two points, this time of the year are critical.”

Northeastern moves to 20-9-1, and 12-7-1 in Hockey East play. This is the second straight year of 20 or more wins for Northeastern and third of the last four seasons. The win moves Northeastern to third place in the conference, one point ahead of Providence and one point behind UMass Lowell.

New Hampshire, meanwhile, drops to 11-11-8 and 7-8-5 in conference play. Brendan van Riesmdyk’s two-goal night was his second career two-goal effort this season. First was on January 5th against Yale. Mike Robinson made 28 saves on 33 shots faced.

“Disappointing outcome,” a deflated Mike Souza said. “I thought we started the game really well. But they took it to us the second half of the game. We took two penalties that are preventable. They’re a good team. We know that; we’ve talked about it all week. They’re an NCAA Tournament team. You can’t beat yourself against those type of teams, and we did it to ourselves.”

Despite the loss, UNH secured a Hockey East playoff berth thanks to a 1-0 BU overtime victory against the Vermont Catamounts.

The teams rematch tomorrow night at Whittemore Center. Puck drops at 7 pm. Northeastern then plays a weekend set with Boston College and UNH does likewise with UMass Lowell to open March before the teams close the regular season with a rematch at Matthews Arena on March 8th.