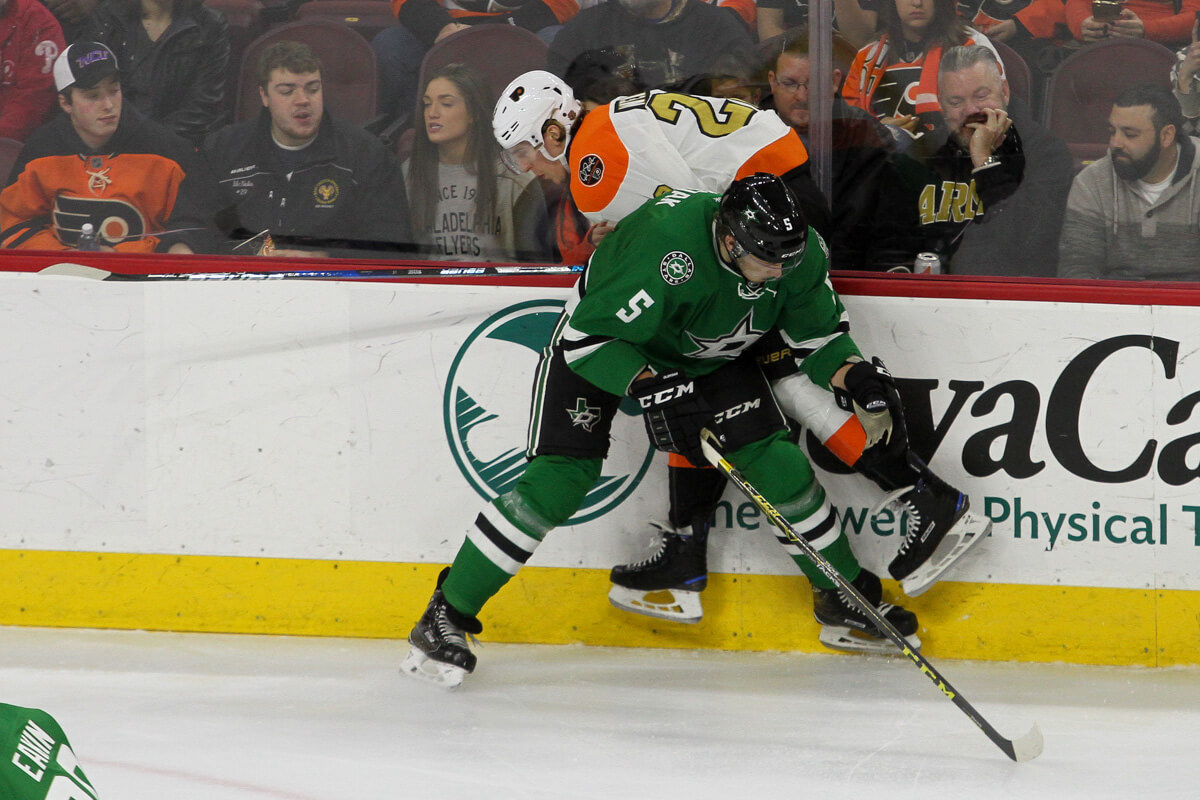 Oleksiak Hopes to ‘Make the Most of It’ with Penguins

Almost as big, in fact, as the expectations of the environment he walked into Wednesday when he joined his new team, the Pittsburgh Penguins, for his first practice.

Oleksiak, 24, was the No. 14 overall pick in the 2011 NHL Entry Draft, and never quite fulfilled the expectations that came along with it. When the Dallas Stars shipped him to the Penguins Tuesday before the league’s holiday roster freeze, the fourth-round, 2019 draft pick they got in return reflected just how far his stock had fallen.

That doesn’t bother the Penguins, who took on several successful reclamation projects en route to their two Stanley Cups. Justin Schultz, a highly coveted college free agent when he joined the Edmonton Oilers who was worth only a third-round draft pick when he was dealt, comes to mind.

“I think what’s this organization’s done over the past few years kind of speaks for itself,” Oleksiak said. “I know a lot of guys who have been here and are here now who can’t say enough about it. It’s a real honor to be here and I’m really grateful for it.”

Oleksiak might never put up the kind of offensive numbers that earned Schultz a three-year, $16.5 million contract with the Penguins last summer. He was primarily a defensive defenseman in Dallas, registering only seven points (5G, 2A) in 41 NHL games last year. But his AHL numbers, with a high of 33 points in 59 games in 2012-13, hint that he could have offensive upside.

The Penguins seem to think so, too, using him on the second power-play unit in Wednesday’s practice.

“Obviously the size is the thing that stands out the most, but just kind of [play] a responsible game, solid puck moving, bring a lot of energy to the group and be an imposing force on the back end,” Oleksiak said in describing his game. “But if I get that [power-play] opportunity, I’m going to try to make the most of it.”

Oleksiak also said he’s equally comfortable playing on the left or right side. That likely made him particularly appealing to the Penguins, who have been playing offseason acquisition Matt Hunwick on the right, his off side.

About those big expectations? They’re not on Oleksiak, but on a Pittsburgh Penguins team that has reached a low point in an already disappointing season.

After a season-long, five-game homestand ended with two wins and three losses, the Penguins hit the road to play the Vegas Golden Knights, Arizona Coyotes and Colorado Avalanche. They returned home with only one win in those three contests.

The back-to-back champs are two points out of the last Wild Card spot in the East. They’re also just two points away from the cellar in their division, the highly competitive Metro.

GM Jim Rutherford said last week that he wouldn’t shy away from a major trade to shake things up. Tuesday, the day after the last loss of the disappointing road trip, he sent forward Josh Archibald, goaltending prospect Sean Maguire and a sixth-round pick in 2019 to Arizona for a veteran goalie on a two-way contract, Michael Leighton, and the fourth-round pick he used to acquire Oleksiak.

Although neither of those deals qualifies as major, Rutherford could be setting up for something significant to help the Penguins get back on track. Oleksiak gives the Penguins eight NHL defensemen once Schultz returns from IR in the next couple of weeks, which could free them up to trade someone like Ian Cole, who will be a free agent next summer and has been a healthy scratch recently.

“Ultimately, the question that we try to answer is, ‘Which group of players is going to give us the best chance to win?’” Sullivan said after Wednesday’s practice, when all indications were that Cole would be a healthy scratch in favor of Oleksiak Thursday against the Columbus Blue Jackets. “That’s the discussion that goes around the coaches’ room, and that’s the criteria we use when we make the final decision.

“They’re difficult decisions. We’ve got a competitive roster; we’ve got a lot of good players. We don’t take it lightly.”

What the Penguins have taken lightly too often this season is their effort and energy level. That could be because they’re simply out of gas from playing more hockey than any team over the past two years. It could be because a regular-season game in December simply can’t compare with the stakes they’ve become accustomed to playing for in June.

In either case, it’s clearly frustrating Rutherford and the coaching staff.

“We got outplayed in the second period badly,” head coach Mike Sullivan said after Monday’s 4-2 loss at Colorado. “I thought they were hungrier than we were. We took three or four penalties in the period; that doesn’t help. But we got outplayed. They were better than us.”

Sullivan cited his team’s lack of urgency, which led to losing puck battles, giveaways, sloppy line changes that put the players coming on in a bad spot, and passing up opportunities to shoot on the struggling power play.

“Obviously we’d like to see our team play with a lot of conviction and a lot of determination,” Sullivan said. “I think that’s what it takes to win in this league. You win by playing the game with passion and emotion, but staying on the right side when it comes to the emotion. In the absence of it, it’s hard to win. I think the game is rooted is in the passion, and we’ve got to find a way to bring more of that, more consistently.”

Thursday would be a good time to start. The Penguins have a lot of games against divisional opponents coming up, including hosting Columbus twice in the span of a week. That’s a big opportunity to gain ground in the standings quickly – or fall further out of the playoff picture.

“We need to find a way to put some wins together,” said captain Sidney Crosby. “You look at the division, how tight things are, and these are big games. We need the points, and we want to make sure we finish strong before the Christmas break.”

Finding the passion and urgency the Penguins have been lacking would go a long way toward making that happen.

“When you’re playing better as a group, that’s a good way to get enthusiasm,” Crosby said. “We’ve got to find a way to be more consistent and I think that’ll come. Confidence is part of it, but I think you make your own confidence with the way you play.”