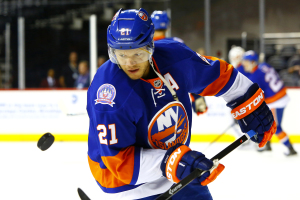 Kyle Okposo scored four goals while John Tavares and Josh Bailey each had three assists to lead the New York Islanders to a 6-3 comeback win over the Pittsburgh Penguins before a sellout crowd at the Nassau Coliseum Friday night. The win left the Islanders alone in first place in the Metropolitan Division and first overall in the Eastern Conference.

The Islanders overcame an early 2-0 deficit on goals by Sidney Crosby and David Perron in the first period and then a deflating second goal by Crosby with just 4.4 seconds left in the second period that gave Pittsburgh a 3-2 lead after 40 minutes. Despite the last second goal, the Islanders kept their poise in the final 20 minutes and completely took control of the game.

“I think we just stuck with our game,” Bailey said. “The first two periods, we weren’t really playing up to our expectations but we kept ourselves in the game. We found a way to rebound early in the third and get a few early goals.”

Okposo scored the first Isles’ goal late in the first period, and then struck for three straight in the third period to complete the four-goal night and put the Isles ahead 5-3. It was Okposo’s first-career NHL hat trick.

An empty-net tally by Michael Grabner closed out the scoring with 1:13 left on the clock.

The prettiest goal by far was Okposo’s third of the night which came at 11:51 of the third period and was set up by a perfectly executed pass by Bailey.

Bailey was very modest when asked about the play. “I was kind of flat-footed in our end, just tried to get off as quick as I could and not to put anybody offside,” he said. Johnny [Tavares] did a good job of driving to the net and Okie found a seam there and put her home. I was really just looking for the best option and it happened to work out.”

Okposo admitted he hadn’t scored four goals in a game since high school. “I didn’t have a ton of opportunities,” Okposo said. “I had a fair amount, but the puck just seemed to pop in the right spots tonight.”

The goals raised Okposo’s total for the season to 13. He now has 41 points in 44 games.

“We knew this was going to happen for him at some point,” Bailey said. “He’s had so many chances and has been shooting the puck really well.”

With the victory, the Islanders improved to 30-13-1 on the season, good for 61 points, three ahead of Pittsburgh.

Still, the Islanders are doing a good job of keeping their collective cool. “Whenever you have a divisional game, it’s a big game because it can be a four-point swing. We’re just trying to get the win and keep pace with everybody,” defenseman Travis Hamonic said. “We’re not overlooking anything. We haven’t done anything yet. We love where we are but we’ve got a lot of better hockey to play and we understand that and there’s a lot of games left. As a group, we’ve done a very good job of not overlooking the big picture and just taking it game by game.”

The Islanders return to action Saturday night when they travel to Montreal to face the Canadiens. Faceoff is at 7:00 pm ET.

Prior to the game, the Islanders honored Hall of Famer Bryan Trottier. Trottier dropped the ceremonial first puck before the game and received an enthusiastic ovation from the crowd. He remains the franchise’s all-time leading scorer and best all-around player.

After the game, the official scorer briefly took away Okposo’s fourth goal and gave it to Brock Nelson. Minutes later, the goal was restored to Okposo and Nelson was awarded an assist on the goal. An assist was taken away from Johnny Boychuk.

Sidney Crosby finished the game with two goals and one assist for Pittsburgh, but he was a minus-two.

Two of the three goals by Pittsburgh came on the power play.

The Islanders have now outshot their opponents in their last 15 games. The Isles outshot the Penguins 16-5 in the third period to keep this streak alive.