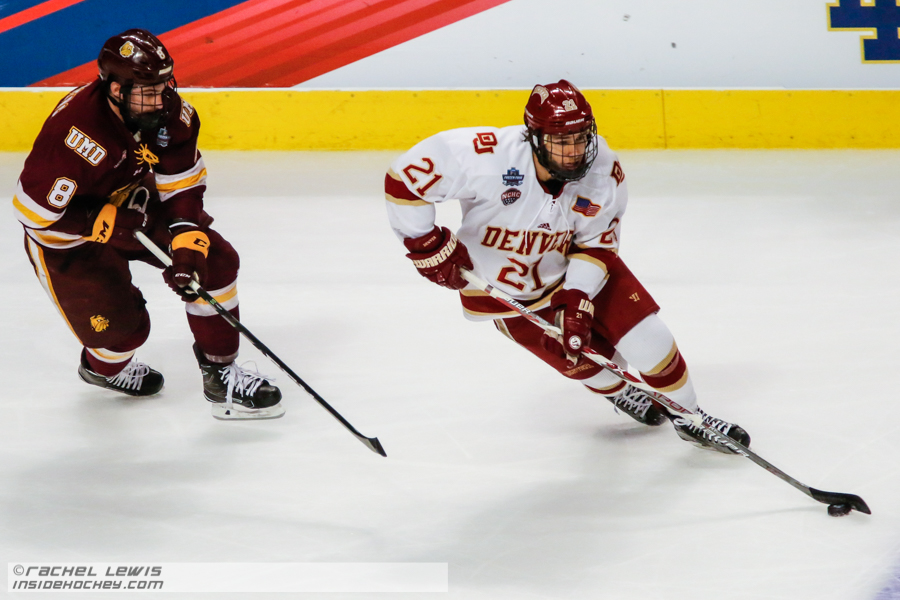 One month of college hockey is complete. Teams and conferences have fought, skated hard, impressed, and disappointed. What have we learned in the early stages of the season? Here are a few things.

The NCHC is Best

When Penn State triggered major conference realignment in 2011, they not only made the Big 10 Hockey conference a reality, but they also created a super conference in the National Collegiate Hockey Conference. The eight-team league has seen at least one member play in the

Frozen Four every year since beginning play in the 2013-2014 season. They’ve also produced the last two National Champions and both contestants in last year’s National Championship game in Chicago. This year is holding to form. Three of the top four spots in the USCHO Poll and four of the top eight spots belong to teams in the NCHC, including the top two. Denver and St. Cloud lead the way, North Dakota is third and Minnesota-Duluth is eighth. Colorado College has also surprised with a split against North Dakota and is in the “Others receiving votes” category. Five of the eight teams in the conference are in the rankings or at least receiving votes. No other conference has anywhere near that kind of notoriety, recent success, or poll success.

Of all the NCHC’s successes, Denver is atop the heap. Last year’s Denver Pioneers were a wire to wire national leader and the favorites for the title. Will Butcher won the Hobey Baker Award and Tanner Jaillet won the Mike Richter Award. They dominated the early rounds of the NCAA Tournament and won a classic National Championship game over Minnesota-Duluth. They cemented their status as one of the best college teams to take the ice. When Jim Montgomery came back for the start of this season, he thought the Pioneers could be even better. Turns out he was correct. Even without Will Butcher and six other graduating seniors, Denver has been the top team in the sport. The Pioneers are the only team to hold the top slot in the polls. They’re 4-0-2 with highlight wins on the road against Notre Dame, Boston University, and Boston College. They’ve had big scoring outputs from Troy Terry, Dylan Gambrell, and Henrik Borgstrom, great development from Freshmen Jake Durflinger and Griffin Mendel, and dominant goaltending from Tanner Jaillet. They have all the tools needed to repeat. And they are the team to beat right now.

The Boston University Terriers came into the season as the 2nd ranked team nationally and the top Hockey East team. David Quinn has proven to be the best recruiter of young talent in the nation. He looked to mix a skilled freshman class with returning veterans Brandon Hickey, Bobo Carpenter, Jordan Greenway, and goaltender Jake Oettinger. The mix has looked good at times. They beat 14th Quinnipiac in overtime on the road. But there have been some real growing pains. BU was swept two of the last three weekends. Minnesota State Mankato paid a visit on the 14th and 15th and swept the Terriers. BU then lost in a classic game against Denver and a 3-0 stomping by Providence to close the month. They’ve struggled recently when facing scrutiny and in-game adversity. The Terriers are under .500 at 3-4-1 on the young season and still ranked 12th in the nation. They are a talented team and will contend deep into March, but they have more growing to do to chase away the title of “Almost Champions” in college hockey.

This offseason, Dick Umile announced that this would be the final year of his legendary career. The New Hampshire Wildcats have appeared intent on making sure their leading man goes out the right way. New Hampshire started in the “Others Receiving Votes” category. After a 5-1-1 start, the Wildcats have climbed to a tie for 13th with Clarkson. They swept fifth-ranked Lowell to open the season, including in a season-defining opening victory. They’re 0-1-1 in their last two games with a loss to Colorado College and a tie against Vermont. However, the Wildcats have surprised behind freshmen revelations, Max Gildon and Benton Maas. Shane Eiserman has also had a strong start and Danny Tirone has had his best season between the pipes for UNH. It’s early, but UNH is atop the Hockey East standings and is looking to write a perfect outro for one of the best coaches in collegiate history.

Big 10 Hockey Is Worth It

After all the headaches and pains of rearranging the conferences, the Big 10 is up and running. Is it worth all the shuffling? Yes. Minnesota, Wisconsin, Ohio State, Penn State, and newcomer Notre Dame are all in the rankings. Michigan is just outside the rankings and Michigan State deserves consideration there too. The Big 10 has brought traditional rivalries to the forefront and brought Penn State into the sport. There are only 60 schools that do college hockey, so any good schools that join in and support the growth of the sport is a good thing. Hockey fans ought to be following the development of this conference. It may well mean the growth of the sport.