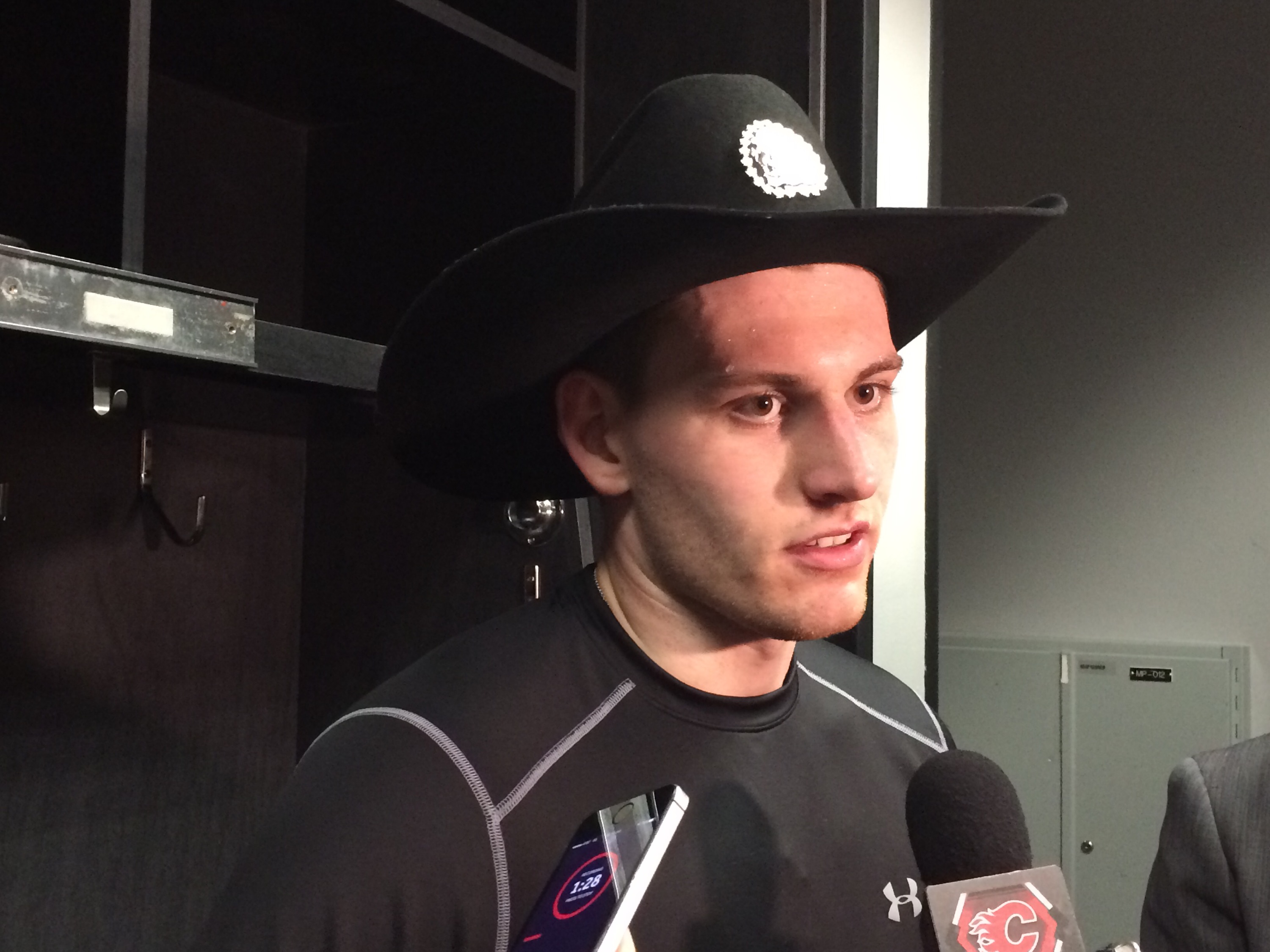 Rookie goalie Jon Gillies of the Flames with cowboy hat on after he won his first game.

Nothing to See Here

Well, not nothing exactly, at the LA Kings game Thursday evening. In fact, some kinda bizarre line combinations. How about the Carter-Toffoli-Pearson line all split up so that each was on one of the first three lines? How about a fourth line of Kempe, Brodzinski, and Shore? Not so odd, maybe, as they’re all young players.

But what about Toffoli stuck with otherwise third-liners Andreoff and Dowd? Or Carter with Brown and Lewis? Or Pearson with Iginla and Kopitar? Actually, that last might be the closest to an elite line that this team had on this night.

You might have also noticed that one name was missing: Gaborik. Not because of any injury as far as I could determine. But just a scratch. That’s two games in a row. And it’s no wonder. He’s have one goal since mid-March, and just two assists to mitigate that lack of production.

That and the line combinations say one of two things by Coach Sutter: either, I’m leaving, so I don’t give a toot what you think about who I play with who; or, this is still my team, and I’ll darn well “reward” who I think deserves it by playing people where I think they should play—whether up or down the lineup.

The fans didn’t seem to care. They were there in their thousands. They watched and cheered while the Flames and Kings played to a 1-1 tie in the first period. They said when the organ prompted them to that the Flames sucked. Irrationally enthusiastic as always.

The game might have gotten rough and out of hand, as the Flames’ game on Tuesday versus Anaheim did. Fights galore, including near line brawls, characterized that message sending contest. But who wasn’t there who would have mucked it up? Clifford and Nolan. And yet they needed to be. There’s still bad blood and unpaid debt on the part of Matthew Tkachuk for a dirty hit to the face of Drew Doughty March 19th. (Though to be fair, the teams have played since, on March 29th.)

And just to round out the point, guess who was in net? After playing to a 6-4 win versus Edmonton on Tuesday, Quick was on the bench. Bishop, thus, took to the crease. He did well, including on one spectacular leg save in period one when the puck came was across the slot to Johnny Gaudreau, who whipped a shot that Bishop got a leg on. It was the only thing he could do. Gaudreau looked to the ceiling.

The goals in frame one were by Sam Bennett early on a power play, a beautiful passing play all around the zone that was put in from the middle slot, and by Trevor Lewis, a puck that was fed to him on the backhand by Carter across the Calgary blueline. Lewis buried a low wrist shot.

There was lots of scoring in the second period, all by Calgary. By the end of the frame, what had been a 1-1 knot was a 4-1 deficit for LA. The shots had ended period one at 11-7 for the Kings. The second ended 20-17, also for LA. But three breakaways had happened, including one in which Doughty flagrantly hooked Gaudreau and wasn’t called. One break did result in a goal—Wideman broke out of the penalty box, and Ferland threw the puck blindly up the center, and Wideman grabbed it, cruised to the net, and put it low through Bishop’s legs.

The two others included a wraparound by Freddie Hamilton and a tip off a slapshot that was credited to Chiasson after Brodie took the shot.

Meanwhile, the crowd was placated by constant giveaways, this being Fan Appreciation night. That fete was originally scheduled for Saturday, but that game will be Bob Miller’s last, and dedicated to honoring him and what he’s done for the team as play-by-play announcer for 44 years.

Good thing the masses were given prizes, including the promise of ice cream for everyone, because on the ice, the action was tepid as far as LA was concerned. Giveaways, running around, no particular offensive oomph—it was on the edge of dreadful.

The Kings couldn’t even muster a shot on a power play gained with about three minutes left. When, after it had just ended, Derek Forbort received a clever pass and put the puck toward the open side of the net, goalie Jon Gillies of the Flames spun his whole body around in order to get a glove on it. The crowd did respond to that—with disappointment.

Period three saw no improvement for the home team, and no scoring for either, leaving the game 4-1 in favor of Calgary and their rookie, first-game netminder. About the only excitement happened early, when Toffoli drove the net on the left side and tried a little flip deke that caused the puck to roll off his stick.

Perhaps more symbolic of the Kings’ defeatist attitude was when Kopitar and Toffoli saw the puck get past a Calgary defender and went down two-on-one on the Flames net. They lagged it down the ice, with no jump whatsoever. Not surprisingly, no shot resulted. The Flames, meanwhile, were shooting from everywhere. They ended up with 24 on the game, to LA’s 28.

The Calgary players said after the contest that they were proud of the netminder and ready to end the season strong. Wideman said, “He was great, played great, made a lot of big saves. We’re happy for him. First game, first win.” But he commented also that the team needed to play well in their last game Saturday. “You want to win every game you can. Saturday we want to ramp it up, to make sure we play the same way in that game as in [playoff] game one. It’s a big game. We can use that game to play that way, play the way we need to win.”

Mikael Backlund said similarly, “We want to go into the playoffs on a good feeling. We want to finish out like we played today. We were so-so in the first, but I thought we picked it up. We’ve got to keep this thing rolling, keep pushing, and of course, we want to win, but the biggest thing is to play well.”

The Kings honor Mr. Miller Saturday. The game’s at an odd time—3pm. The fan fest outside the arena begins at 1pm.

The team then finishes its season in Anaheim on Sunday afternoon. Bob Miller will call that game for TV as well, his last as fulltime announcer for the team.

Speaking of Bob, he’s the reason I wrote Facing Wayne Gretzky. The publisher called and asked him for a name of who could do such a book. He told them I could. That’s all it took.