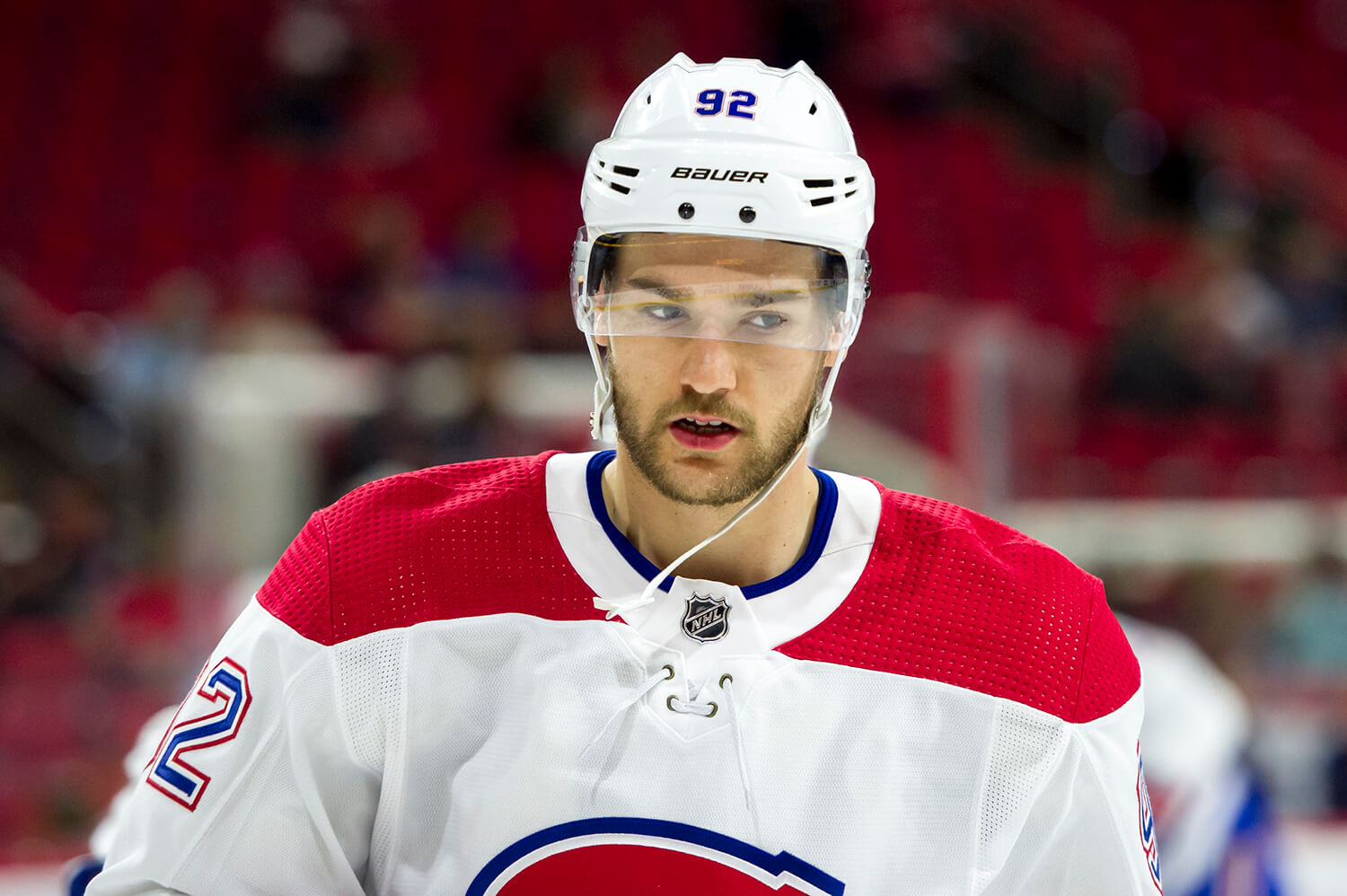 Montreal Canadiens left wing Jonathan Drouin (92) skates around the ice during warmups before a game between the Montreal Canadiens and the Carolina Hurricanes at PNC Arena in Raleigh, NC, on October 3, 2019. (Spencer Lee/ Inside Hockey)

If ever a team needed a win, it was the LA Kings on Saturday  afternoon. The Montreal Canadiens, their opponent, could have said the same for themselves, but  they had just defeated the  San Jose Sharks Thursday night after a big 5-1 loss to Seattle to start their West Coast road trip last Tuesday.

The Kings, however, had not posted a victory since their season opener, extending their losing streak to six games. They had to do better. But how, given that they’re two defensemen short, including stalwart Drew Doughty, out for an extended period?

A few lineup shifts, for one thing. Out was Gabe Vilardi, inconsistent play plaguing him early in the year. Also missing was Carl Grundstrom, who had played five games to date this season.

In were Lias Andersson, who had been hurt in preseason and was making his year’s debut, and Brendan Lemieux. On defense was Kale Clague, making his season’s debut.

Also in the building was Tyler Toffoli, making his first appearance in LA since leaving to Vancouver and, obviously, ending up in Montreal. There would be the requisite video tribute to him in the first period, greeted by him standing up at the bench and smiling broadly. Gone are the days of the “I’ll ignore this and then give a little wave at the end” approach, apparently, and that’s great.

Philip Danault articulated the team’s mission plainly before the game: “Be very  hungry,” and the Kings started out that way,  though  they  gave up the first goal shortly before the end of the first period. They got it back with less than five minutes gone in period two, Viktor Arvidsson getting his second of the year and with assists to Kopitar and Maata. That was only the start of their outburst.

Kopitar would continue his point-making ways with an assist on the LA second goal, a power play tally by Arthur Kaliyev. That shot of his, oh what a beauty. Kaliyev got the puck on a pass across the top of the zone, skated in to the top of the left circle, and flung a wrister up and over Jake Allen.

The Kings had started the year on the PP 2-2 in their opening game, as was said, their last win. They had gone 2 for 21 since, so this was a big relief and a sign that maybe things were going to get righted.

Kaliyev backed it up with a very similar play just after, this time rifling the puck from the top of the right circle with a teammate in the goalie’s face for a tip. Allen made a nice leg save.

The Kings’ Kempe then took an ill-advised penalty behind the  play while the Kings were on the PP. That made for nearly two minutes of four-on-four and then a brief Montreal power play. That was mostly ineffective except for one big blast from Petrie that Cal Petersen made an awkward, sprawling splits save on.

The third period saw the Kings get another power play goal, this time Kupari scoring almost exactly as Kaliyev had in the prior period. He took a puck on top of the right circle, wristed it right past Dustin Brown’s head standing in the crease, and past Allen.

His  coach  later said, “He’s getting more confident. Ras looks excited when he’s playing. He can’t wait for his next shift. He gets off and he looks at [the bench coach] and he wants to be back. It’s nice to see that excitement and that energy that he brings to the group . . . . His  speed and his tenacity helps the group.”

They weren’t done. A fourth LA goal was scored by Alex Iafallo, who followed the puck to the net after Kempe had lost it in the Montreal zone. It had gone back to Matt Roy at the point, and he had blasted one. The shot was so hard that it stunned Allen off his shoulder, freezing him. There came Iafallo, grabbing the rebound and deking it around the goalie and tucking it into the empty front of the net. Roy had assists on both the third and fourth Kings goals.

The game started to wind up with the day still light out, but Iafallo was not done. He scored the Kings’ fifth goal, again on the power play, rushing the puck with a teammate and receiving a pass in the center of the slot. He did a mini-deke to tuck the puck in past Allen, making the game 5-1. If you’ll recall, that’s the margin the Habs lost by to the Kraken early in the week.

But it didn’t stay that way. Kaliyev was just getting out of the penalty box when a puck got loose to the left circle in the LA end and Chiarot took a wrister, much like the one Kaliyev had scored on in the prior period, to make it 5-2. Petersen tried to get over, and looked kind of old-school doing it, but he had no chance.

So everything went right for LA on this day. They outshot the Habs 38-28  and had three power play goals on five chances. Kopitar, Iafallo, Kupari, and Roy all had multi-point games, with Iafallo gaining three (2-1-3). Kopitar leads the Kings with 11 points on six goals.

Coach McLellan said afterwards, “We’ve played good segments in games and lost, but  this was a more complete 60 minutes.” He  cited “composure, pace, and execution” as the keys to the victory. He also pointed to the power play, which  gave the team confidence to play well in all parts of the game.

Tomorrow, they will try to do it again, with Buffalo coming in for another 1pm start.

LA’s forward lines consisted of Arvidsson with Kopitar and Brown; Kempe with Iafallo and Danault (obviously late of the Canadiens); Andersson with Lizotte and Lemieux; and Rasmus Kupari with Moore and Kaliyev.