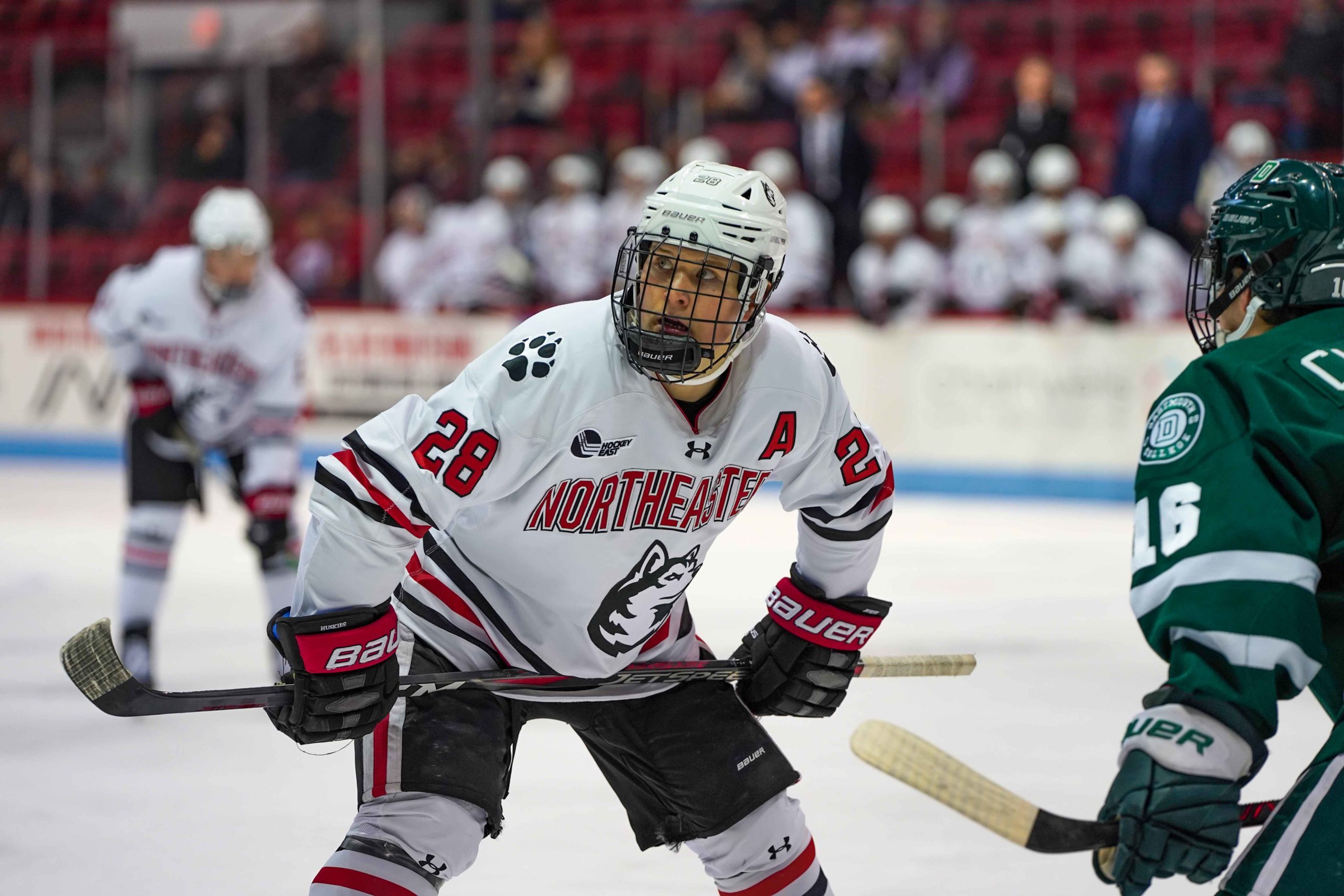 Boston- The Northeastern Huskies have big expectations for their 2020 calendar year. They began the year with a Hockey East victory against UConn on January 3rd. On Monday night, they returned home to a full DogHouse at Matthews Arena to face the Bentley Falcons and earned an unusually dissatisfying win.

Bentley recorded the first four shots and Northeastern created nothing until the mid-point of the opener. Despite being outpaced, the hosting Huskies drew first blood late in the frame. Ottawa Senators draft pick Jakov Novak took a slashing minor. on the ensuing power play, Tyler Madden threaded a beautiful pass through three skaters across the Falcon crease for fellow Vancouver Canucks prospect Aidan McDonough for the Milton, MA, native’s 8th goal of the season and a 1-0 lead at intermission.

Northeastern appeared mostly asleep in the second period as Bentley outshot the Huskies 11-4. NU got two power play chances and generated one shot. Goaltender Craig Pantano stopped all 11 Falcon shots and kept his team into the lead into the second break.

After a slow first 40 minutes, both teams kicked the scoring into high gear. Jonathan Desbiens began the scoring 1:57 into the third to tie the game. Tyler Madden took a slick Jordan Harris feed three minutes later and scored a goal from his knees to return Northeastern to the lead. Shortly before the mid-point of the third, Brendan van Riemsdyk took a high sticking minor. Jakov Novak buried his team leading 12th goal of the season on the ensuing power play to tie the game. Pantano stopped a few golden Falcon chances late to maintain the tie long enough for the Huskies to wake back up in the final minutes.

With 1:44 left in regulation, Matt Filipe lasered a shot through Falcon goalie Fraser Kirk to claim the lead for good. A mere 36 seconds later, while trying to pull the goalie for a 6on5 chance, Bentley failed to gain the offensive zone and allowed a chance in their end. Zach Solow paid off the chance with the final goal of a 4-2 Northeastern win.

“I’m proud of our guys after that 60 minutes,” observed Falcon Head Coach Ryan Sodorquist. “We won a lot more battles than they did. I thought we did the little things we needed to do. We got some timely saves. I thought we did a really nice job, we played really hard. Unfortunately we gave up that 3-2 goal and sorta unraveled there.”

The Falcons return to Atlantic Hockey Conference play against Canisius College this weekend. Puck drops at 7:05 pm ET at the Bentley Arena against the Golden Griffins.

“We’re not going to apologize about getting wins,” commented Head Coach Jim Madigan. “We found a way to win, that was the positive out of the negative. We’ve gotta get a lot better. I know our guys know that. And credit to Bentley, they played very well.”

Craig Pantano stopped 26 of 28 shots. “He’s unbelievable,” said Tyler Madden. “He’s definitely held us in a lot of games, especially tonight when it could’ve been 4-4 at the end. He came up huge tonight.”

Northeastern resumes Hockey East play on Saturday night in a road trip to New Hampshire. Puck drops against the Wildcats at the Whittemore Center in Durham at 7 pm ET.