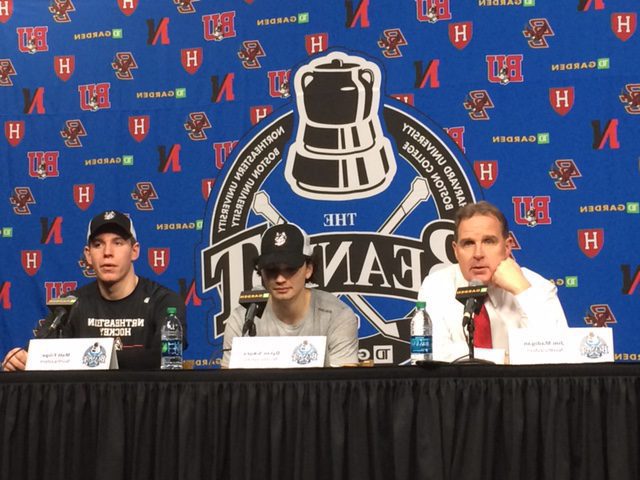 Before the Beanpot Title could be decided, there was one more game to play, the consolation match. This year’s game was between the Boston College Eagles and the Northeastern University Huskies. Both teams were looking to end two-game losing streaks of theirs and avoid the ignominy of finishing last in the Beanpot. Neither team had been playing up to expectations in the last week, but they both had chances for redemption at the TD Garden.

Northeastern controlled much of the 1st period, outshooting the Eagles 15-8. They could not figure out BC’s goalie, Joseph Wall, who pitched a 1st period shut out. While Northeastern shot in vain, BC managed to create a shot late in the period, finding David Cotton for a good shot from the left circle and a 1-0 lead. Northeastern created some chances late, but could not get a goal with seven shots on two different power plays.

The second period was the reverse of the first, with BC outshooting the Huskies 11-9 and not figuring out Ryan Ruck, despite two power plays and four shots on those advantages. Near the midway point of the period, Northeastern found the equalizer on freshman Matt Filipe’s stick from the right circle.

Both offenses showed up in a big way in the 3rd period. Northeastern opened the scoring with Filipe’s second goal of the night coming after two different too many men on the ice penalties, one of which was cause by Filipe. He recovered by taking Brendan Collier’s pass and burying a shot to give Northeastern a lead.

The lead didn’t hold. Just after the halfway point, Colin White made a putback shot to tie the game back up. Just after entering the last minute, David Cotton put a puck by Ryan Ruck to seemingly give BC a late victory. However, the officials reviewed the call and it was determined that Ruck was interfered with, thus disallowing the goal.

Mere seconds later, Dylan Sikura took a pass from the nation’s points leader, Zach Aston-Reese, and gave Northeastern a 3-2 lead. Seconds later, while BC was attempting to pull their goaltender for an extra skater, Adam Gaudette stole a pass and scored an empty net goal to give Northeastern their final 4-2 margin of victory.

The loss was the first time Boston College lost in the consolation game since 1993. Head Coach Jerry York was fervent in his disagreement with the officials on the overturned goal, and equally certain of his team’s intent to refocus on winning the regular season Hockey East Championship.

BC’s next game is at home in a two-game set on Friday and Saturday against the University of Vermont. Both games are at Conte Forum and both games start at 7 PM.

Northeastern climbs over .500 with the victory, and everyone associated with the program is optimistic about their future prospects. Their next games are in a home and home set against the University of Connecticut Huskies. The first game is at the XL Center in Hartford on Friday. Puck drops at 7 PM.