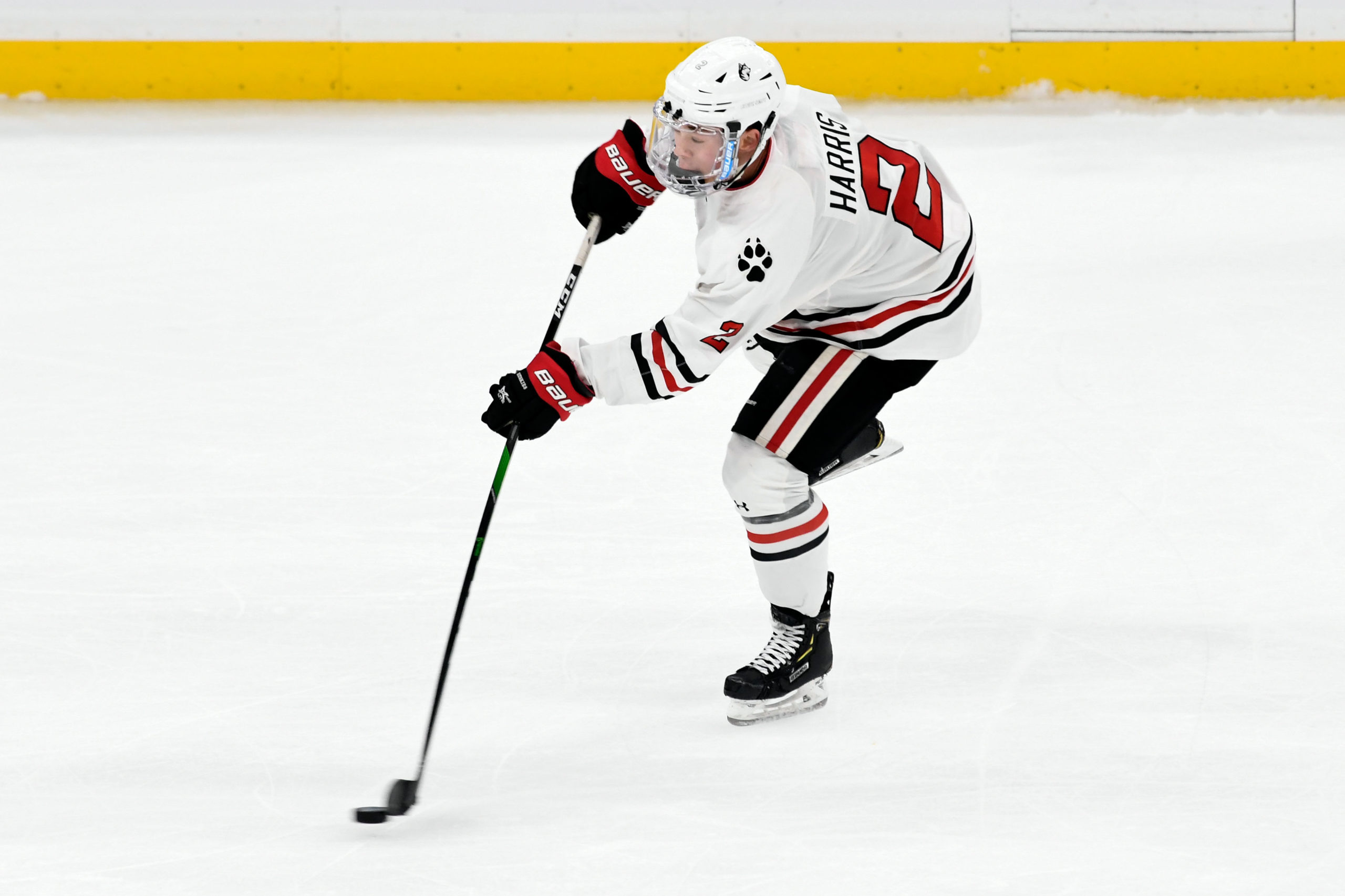 Boston, MA- Two-hundred and eighty days ago, Northeastern secured a spot in the Hockey East playoffs by defeating Boston University at Agganis Arena. Less than a week later, the entire college hockey season was ended early due to the coronavirus pandemic. Since then, Northeastern waited patiently through offseason programs, delays, and reschedules to hit the ice again. On Saturday night, Northeastern finally began their 2020-21 season against the Merrimack College Warriors and flexed their offensive muscles.

The opening period was even on the shot counter (10-10) but Northeastern capitalized on their chances to set the tone.  into the first, Freshman Steve Agriogianis got the scoring started with his first collegiate goal in his first collegiate game. Jordan Harris followed only 1:17 later with a power play ripper from the right circle on the power play. NU went into the intermission up 2-0.

In the first 11:15 of the second, Northeastern put the game out of reach. Zach Solow went first, cutting across the crease and saucering the puck through Troy Kobryn 3:03 into the stanza. Logan Drevitch took a tripping minor a few minutes later and the Husky power play bit again. Solow delivered the puck across the slot to Tyler Spott who rifled home his first collegiate goal in his 34th collegiate game. “His eyes were like saucers,” commented Solow. “He put that thing through the net and we were all thrilled. He came so close to scoring so many times last year.”

The onslaught continued with a Filip Forsmark hooking minor. Jordan Harris potted his second goal of the night on the ensuing power play and chased Kobryn from the game after five goals on 18 shots faced. Zachary Borgiel entered and surrendered a goal to Neil Shea 2:40 into his night. Dominic Dockery got Merrimack on the scoreboard late in the second, but intermission saw Northeastern up 6-1.

The teams combined for three more goals. Agriogianis went first. The freshman from East Hanover, NJ, recorded two goals in his first collegiate game, giving his team a 7-1 lead on the team’s third power play goal of the night. Riley Hughes capped the NU scoring with his season’s first with 1:51 left. Merrimack had the final tally with Conor Lovett scoring his first collegiate goal, but Northeastern left their home ice with an 8-2 win.

His second on the PP tonight and third point, Jozefek with his second helper…

Merrimack falls to 1-2 on the season. Zachary Borgiel stopped 9 of 12 shots faced on the night.

“Just a bad night for us,” commented a blunt Warrior Head Coach Scott Borek after the game. “I wasn’t impressed with the way we played. We got $#!*-kicked in someone else’s building, but we’ll get better.”

Northeastern is 1-0 after their first game. Ten different skaters recorded a point and six skaters scored multiple points. Jordan Harris led the way with two goals and an assist, the first multi-goal game of his career.

“We know what we’re getting out of Jordan Harris,” said NU Head Coach Jim Madigan. “He’s an elite player. He’ll take a lot of minutes because he can. And he’ll always find a way to contribute. Tonight, it was through scoring goals.”

Captain Zach Solow recorded a goal and two assists. Agriogianis led a talented crop of freshmen in scoring two goals and an assist.

“The pace is so different in a game,” observed Madigan. “You can’t replicate that pace with a practice.”

Connor Murphy stopped 20 of 22 shots for his first win in his first start wearing a Northeastern uniform.

Northeastern and Merrimack will move 23 miles up I-93 for a Sunday rematch to complete the weekend. Puck drop is scheduled for 4 pm ET.

Northeastern is not slated to take the ice again until a December 26th and 27th series in Burlington, VT, against the Vermont Catamounts. They aren’t scheduled for another home game until cross-town rival Boston University visits on New Year’s Day, 2021. This could change. The schedule is more fluid this year.

Merrimack is currently scheduled to play a home-and-home against the New Hampshire Wildcats next weekend, with the Saturday game in North Andover at Lawler Rink and Sunday’s game at the Whittemore Center in Durham, New Hampshire.