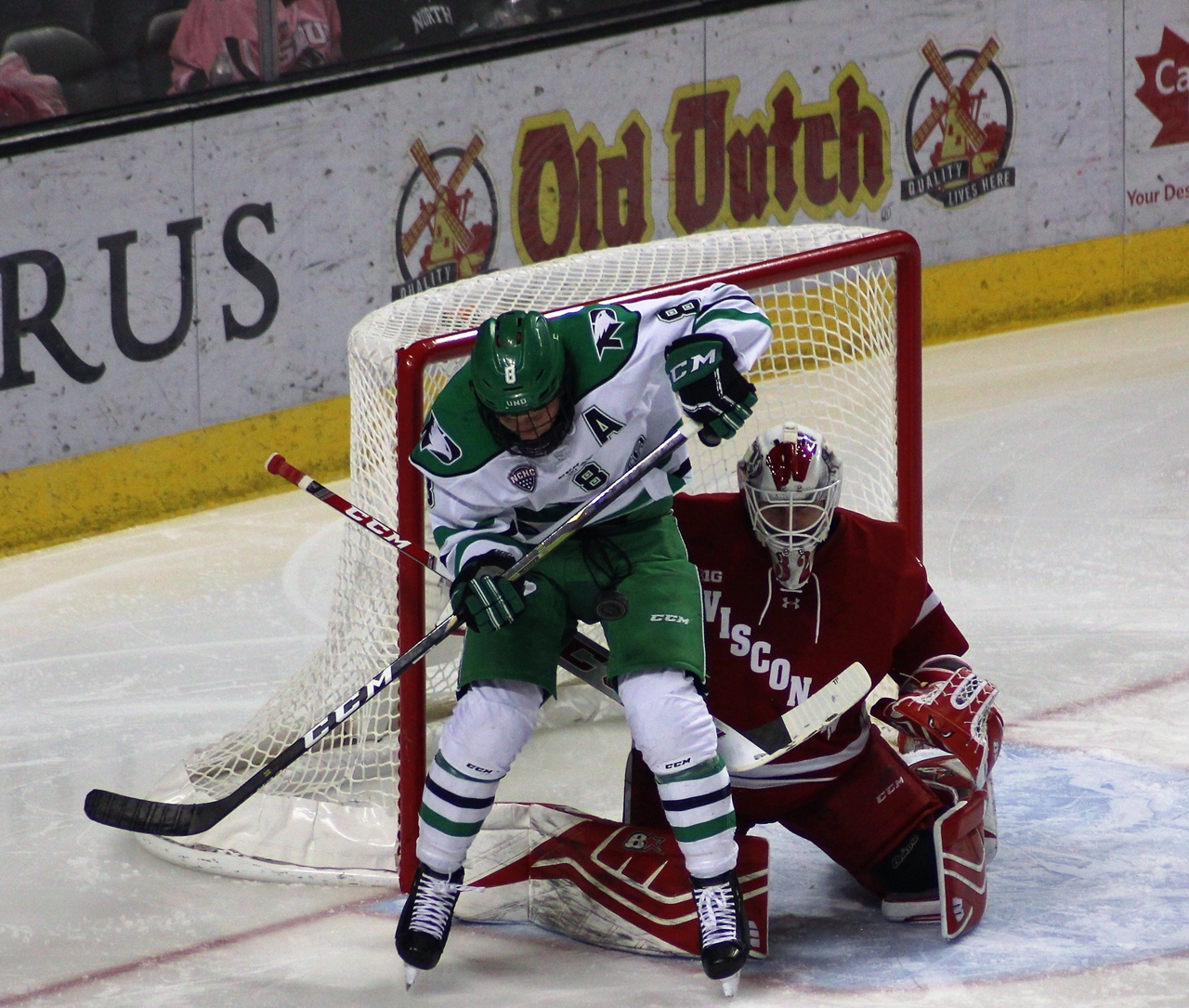 Entering Saturday’s game, the University of North Dakota hockey team looked to gain a series sweep against the University of Wisconsin. Lately, sweeps had been rare. UND hadn’t sweep an opponent at home in 11 months (Dec 1-2, 2017 Western Michigan).

After being shutout 5-0 the night before, the Badgers made adjustments and tightened up on defense. The Badgers were tough all night and didn’t give UND many second looks. When UND got a shot on net, freshman goalie Daniel Lebedeff stood tall stopping 32-of-35 shots.

UND controlled the pace of the game, but they never led until the end of the game. The Badgers took the lead in the first and third periods and the Hawks chased the Badgers for most of the game.

From the stats department, UND went 0-8 on the man advantage. The Badgers had a parade to the penalty box, but the Hawks didn’t cash in. The Badgers undisciplined play finally caught up with them.

Entering the final minutes of the third period, with the game tied at 2-2, UND got a huge break, Badgers defensemen Josh Ess and Tyler Inamoto took a pair of ill-advised, undisciplined minor penalties putting their team down two players.

UND was unable to cash in during regulation play. With the five-on-three carrying over to the overtime period. This time UND made no mistake, 21 seconds into the overtime period, freshman defenseman Jacob Bernard-Docker scored his second goal of the series to give the UND a crucial 3-2 non-conference win.

“Obviously, we had a lot of opportunities tonight on the power play to get a goal or two, but it took us to overtime to do it,” UND head coach Brad Berry said. “Again, that’s the way the game is. I thought that team played hard through the start of the first period all the way through the game. It was a big test for us.”

Berry also shared his thoughts on the game-winning, five-on-three goal.

“We had some good looks on the five-on-three at the end of the game, but they weren’t good looks,” Berry said. “We were standing around. We were a little stagnant.”

Suddenly, UND is on a four-game streak and three of the four wins have come in the third period or overtime. What a difference a year makes, this season, UND is winning games they would have lost last season. They’re grinding out wins. It’s about maturation process.

“There’s a couple of things that are going on,” head coach Brad Berry said. “We’re playing a more a consistent game in all parts of it. We’re getting minutes from guys we never got before, Mark Senden, Schmitty (Cole Smith) and (Ludvig) Hoff. I can’t say enough about that line in this series and what they did. The other part, last year (left) a bad taste in our mouth, these are the type of games that we would lose or tie. We found a way to win. Again, that’s part of maturing and growing and the leadership that gets you through this.”

The series was marred with long reviews on penalties, that can kill a team’s momentum.

“They’re tough, Berry said. “Again, it’s protocol of trying to get the call right. It is what it is. The biggest thing is making sure that bench with our captains and our group have to stay focused and get ready. That’s a good way, number one get some rest. Number two, get ready for the next five-minute increment of the game.”

“We go into these games knowing we have a good chance of winning them if we keep playing the way we do. We’re just going to grind out a win. We were fortunate enough to do that tonight.”