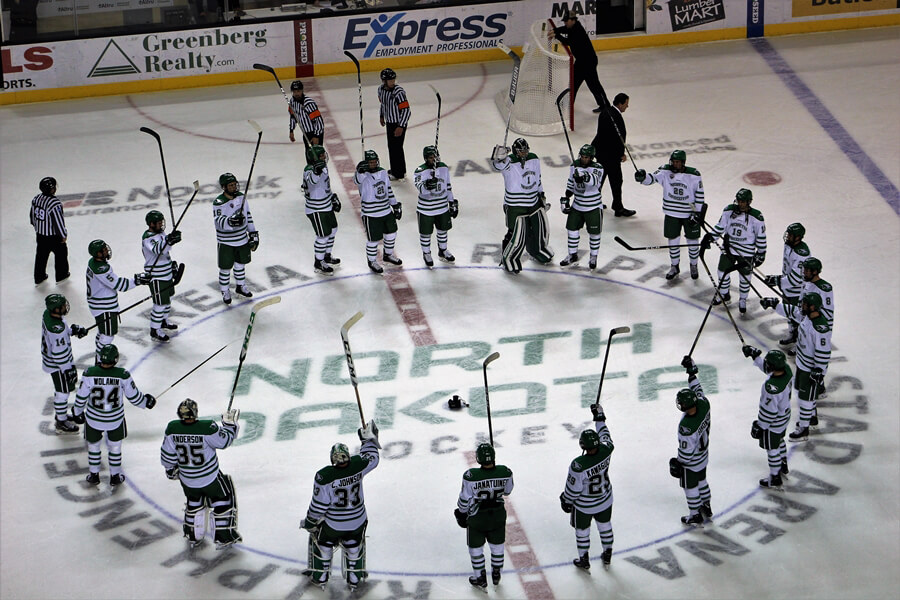 Coming into to the weekend, the University of North Dakota hockey team hadn’t swept a series since October 13-14, 2017 when they swept the St. Lawrence Saints in Grand Forks (2-1W, 6-1 W). Since then, the Fighting Hawks had been close, only to come up empty. On Saturday night, they wouldn’t be denied.

Western Michigan entered the series as the National Collegiate Hockey Conference leader. When they leave North Dakota they’ll be tied with Denver for third place in the NCHC standings. With the series sweep, UND is one point behind the St. Cloud State Huskies, UND’s next opponent.

The win against the Broncos didn’t come easy. Entering the final minute of the second period, the Fighting Hawks trailed the Broncos 1-0. Enter junior forward Nick Jones, who sat out Friday’s game because he was battling the flu. Jones was inserted back in the lineup on Saturday and it paid off. At the 19:37 mark of the period, Jones put the game-tying goal through Ben Blacker’s five-hole sending the UND faithful to the intermission with smiles on their faces. After being sick most of the week, Jones stepped up and helped his team win.

Those smiles would continue in the third period as sophomore forward Cole Smith would score game-winning-goal off the opening faceoff at the 00:07 mark of the third period.

It was a hard-working goal, Western center Hugh McGing won the faceoff from Johnny Simonson and before a Bronco forward could pick up the puck Smith jumped on the loose puck and was off to the races. Smith would blast the puck past sophomore goalie Ben Blacker to score the game-winning goal.

“It’s kind of a set play,” Smith said. “We had both of their wingers jumping right away. I just beat the winger, I had a good jump there. Johnny didn’t lose the draw. I got the puck – I think their defense stepped up so it gave me the edge to go down on the other defenseman.”

Because of their hard work, head coach Brad Berry started the forward line of Smith, Simonson and Josh Rieger. In the end, that move paid off.

“They bring energy and mentality,” coach Berry said. “They earned it. Over the course of the whole year, they’ve worked extremely hard. We went into last weekend with Josh Rieger never playing forward before in his life. He did pretty well.

“That line had a little bit of chemistry. We needed a little jump and a little spark. You saw what happened in the third period with Cole making that play. Again, they’ve been playing the right way.”

Smith’s goal would tie Ben Cherski’s school record for the fastest goal to start the third period. For those keeping track at home, that happened on January 18, 1952.

VIDEO: This should really be a “ICYMI” as Cole Smith ties a record for fastest goal to start a 3rd period since 1952. The goal gives @UNDmhockey the lead 2-1 VERY early in the 3rd period. pic.twitter.com/7FsxmN1ehl

What a way to end the last home series before the new year. It gives the Fighting Hawks some momentum going into the Christmas break.

“It’s incredible,” Smith said. “We haven’t had a sweep. “We haven’t put two games together in a while, especially doing it at home with our fans. It’s the last home series before Christmas break – it felt really good, and there’s static in there (the locker room).”

“Obviously, it feels great,” junior forward Shane Gersich said. “Coming into the weekend, your goal is always two wins. Obviously, you have to get the win on Friday night. We did that yesterday. I didn’t think we had any complacency in our game today. We were super hungry coming to the rink today. Obviously, we got another big one”