Grand Forks, ND – Yearly, the University of North Dakota and the University of Manitoba Bisons play in a season-opening exhibition game.  Over the years, the Fighting Hawks have dominated the Bisons going 16-0 against them. On Saturday night, Manitoba proved to be a scrappy bunch and came close to breaking that streak.

For the most part, exhibition games are normally are a good way for the coaches to evaluate their teams before the regular season begins. Saturday’s game didn’t quite go as planned.

Back to the drawing board.

The UND coaching staff wanted to give all three of their goalies some work during Saturday’s game. The verdict on the goalies will have to wait. Neither goalie saw a lot of shots, Peter Thome (3 saves on 3 shots), Adam Scheel (1 save on 1 shot). I would be shocked if either goalie needed to take a post-game shower.

Senior goalie Ryan Anderson played the final 11:10 of the game and gave up on two goals on three shots, but still got the win. After the game, Anderson’s teammates were excited for their hard-working backup goalie.

“He’s such a competitor in practice,” senior Captain Colton Poolman said. “He takes all of the extra shots that maybe he doesn’t want to do for us. He takes breakaways. He does all of that stuff for us. It’s so unlucky to see him get those breakaways. It’s so hard, he’s coming in stiff and cold and hasn’t played for 50 minutes. It’s tough when you get a 2-on-1. He made the first save on the first shot but the rebound went right to the guy (he scored). Then breakaway.”

For his efforts, coach Berry rewarded Anderson with the game puck.

“We gave him (the game puck) … Bubbs (coach Berry) came in after the game and gave it to Bobby (Ryan Anderson),” Poolman said.”

While Anderson ended up stealing the show, the Fighting Hawks stingy defense gave the Bisons forwards little chance to shoot on net. Through two periods of play, the Bisons put a grand total of three shots on net. There were zero opposition shots on net during the middle period.

In the third period, Manitoba tied the game with goals from Thomas Lenchyschyn and Jonah Wasylak to push the game to overtime. In the end, senior forward Rhett Gardner took the team on his back and buried the game-winning goal to give the Hawks a much-needed momentum-building win. 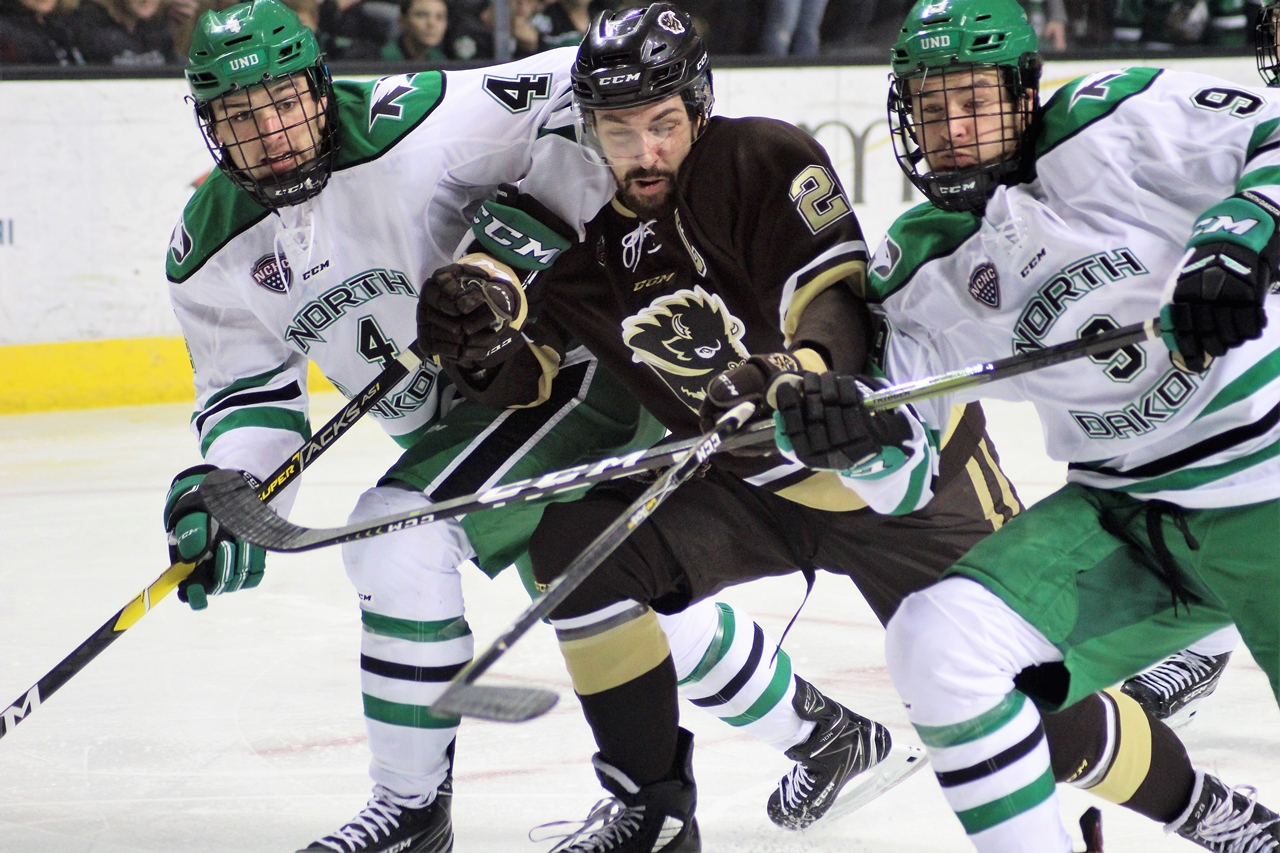 “Just kind of crashed the net, Gardner said. “On the power play, we always have the middle man kind of coming down. The puck popped loose, he was good all night down low, so I tried to get it up and it went in.”

It’s not often that the losing team’s goalie is awarded the No. 1 star of the game. Manitoba goalie Byron Spriggs was nothing short of impressive. UND threw a lot of rubber at the Manitoba net, but Spriggs stood tall, stopping 52 of 55 shots.

“I like really how … We played fast and hard, and we made a lot of mistakes, but that’s to be expected,” Poolman said.  “I am ready happy with the first game even though the scoreboard doesn’t show it. They’re a good team. Hats of to them. Hats of to their goalie, he played a tremendous game.”

“I thought we played well,” Gardner said. “We had a couple of breakdowns in the third there, but I thought our offense was really clicking. I thought defensively we played well, and I thought we controlled all three zones. We came out fast. We kind of let off the gas, but we’re definitely going to build off of it going into Bemidji.”

One low spot for Gardner, he was whistled for four minor penalties and UND doesn’t want their top center sitting in the penalty box. They need to have him on the ice.

“I had a couple of bad breaks on stick penalties and I got tied up with a guy in front of their bench,” Gardner said. “Hopefully, those are out of the way for the rest of the season, no more.”

“He’s one of the leaders of our team, he wears a letter,” Berry said. “It’s one of those things, we have to make sure he’s on the ice and not in the penalty box. And we’ll address that.