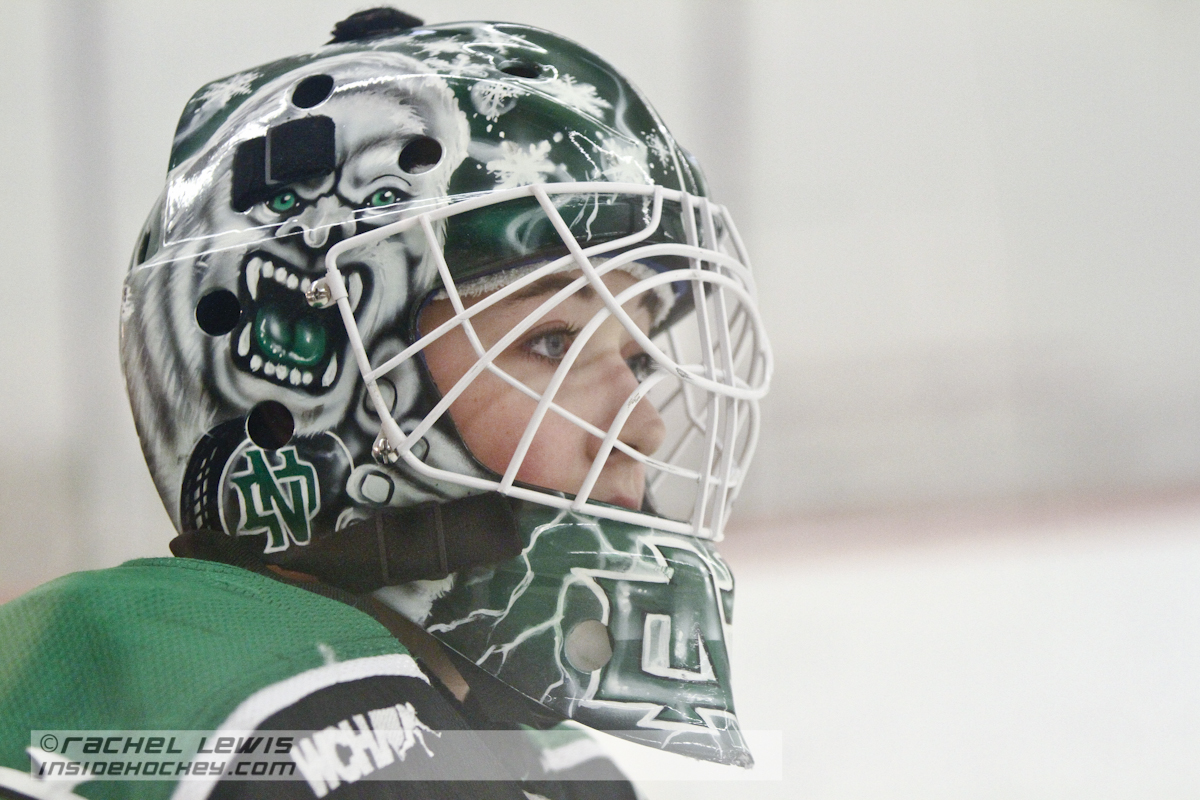 Coming into Friday’s game, UND had a 1-9-0 record against the Gophers over the last 10 games.  UND hasn’t beaten the Gophers since November 17, 2013, and had lost five games in a row.  During the five-game losing streak, UND had been outscored 21-5.

On Friday, UND looked like the number two ranked team in the nation. They played a disciplined game. They blocked shots, they looked like the hungrier team. UND was also very strong on pucks.

The Gophers entered Friday’s game with the top-ranked power play in the WCHA (30.8%). None of that mattered on Friday, as UND’s penalty kill went four-for-four.

UND would take the game’s first penalty at the 15:51 mark of the second period and 49 seconds later sophomore forward Amy Menke would rip a shorthanded goal past Gopher goalie Amanda Leveille.

Menke described her shorthanded goal, “I saw the corner so I picked that one.”

After serving a penalty, senior forward Josefine Jakobsen would give UND a 2-0 lead at the 18:13 mark of the second period.

True to form, Shelby Amsley-Benzie was rock solid in net stopping 25-of-25 shots to record the 10th shutout of her career. Amsley-Benzie stopped a breakaway in the third period to preserve the shutout win.

“I was just playing – by that point – you’re in the game, it’s late in the third period and you’re kind of just going,” Amsley-Benzie said. “I just played it and made the save.”

With eight seconds remaining, Menke would add an empty net goal to ice the game, sending 4,818 happy fans to the exits.

With the 3-0 shutout, UND got its first win against the Gophers at the Ralph since January 13, 2012.

With the Win, UND is now unbeaten in the last seven games (6-0-1) and inches closer to third place in the WCHA standings. After going winless in eight games earlier in the season, everything seems to be going UND’s way.

“I think we’re starting to put it all together,” Amy Menke said. We’re rolling with it and our passion buckets are full right now.”

Head coach Brian Idalski reflected on the win against the second-ranked Gophers.

“I think we just talked about staying on an even keel and focus on executing what we needed to do,” Idalski said. “We didn’t get too low when things weren’t going our way. We can’t get too high; we won one game in February. It’s one game. If this one’s in March, maybe I get a little excited. But it’s only February.”

“Again, she’s been unreal,” Layla Marvin said. “I said this earlier in the week, that it’s no surprise to me.  “She’s a gamer and every year it seems once she gets the number one job she runs away with it. She steals games for us. That’s what we need right now.”

UND looks for a rare sweep against the Gopher, game time is at 4:07 pm CT.