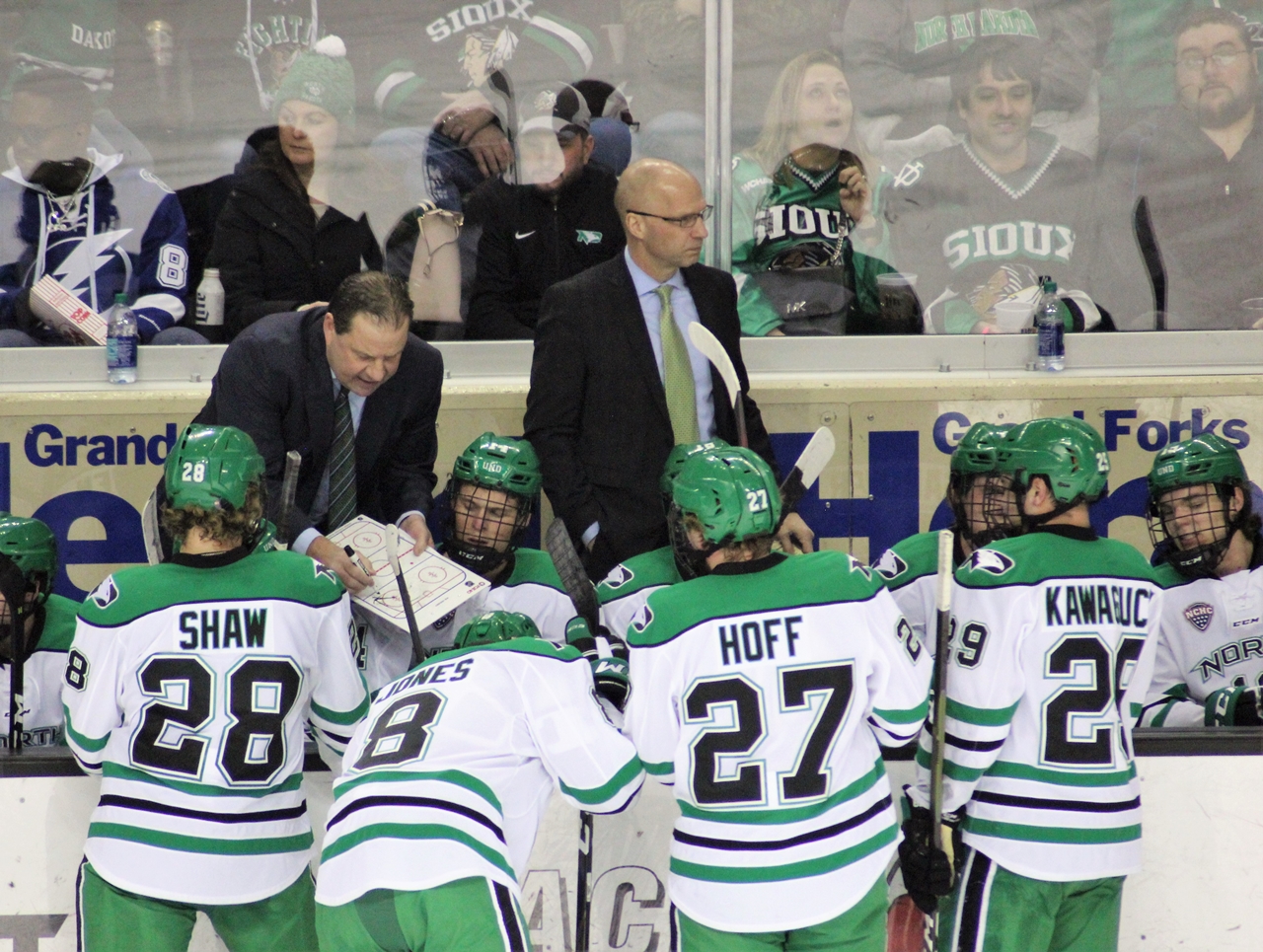 Part of being a leader is taking ownership for your mistakes. Message delivered — move on. Hopefully, your teammates learn from their mistakes and have a short memory.

On Friday night, following the University of North Dakota 3-1 loss to the number one St. Cloud State Huskies, junior captain Colton Poolman took the blame for the game-winning goal that was scored against the Fighting Hawks late in the game. UND is going to need to have a short memory if they want to salvage a split on Saturday night.

On the play, freshman forward Nolan Walker stole the puck from Poolman deep in the UND zone and passed the puck out front to a waiting Patrick Newell. It was a beautiful bang, bang play. Score 2-1, Huskies.

After falling on his sword, head coach Brad Berry stood up for his captain.

“It looked like it was a borderline icing call to me, but nonetheless we didn’t take care of the puck. Colton Poolman has been a warrior for us all year he’s played extremely hard and he’s been the backbone of our d-core.  So, like I said, he’s been solid. It’s unfortunate that happened at that time and again he’ll rebound tomorrow.”

I thought that taking the blame for the game-winning goal was a little harsh. You win as a team and lose as a team.

During the first period, UND came out and took away the Huskies time and space, it was a perfect defensive scheme. After one period of play, UND took a 1-0 lead into the first intermission. From there on out it was all Huskies. They came at the Fighting Hawks in waves.

With the onslaught, freshman goaltender Adam Scheel stood his ground and made many timely saves. In the end, it wasn’t meant to be. With the win, SCSU improves to 18-3-2, 10-1-2 NCHC. With the loss, UND drops to 12-11-1, 6-7 NCHC. UND dropped to 23 in the all important Pairwise Rankings.

In the waning minutes of the third period, with UND trailing 2-1, Huskies captain Jimmy Schuldt hit sophomore forward Grant Mismash with a dirty knee-on-knee hit. No call. After the hit, Mismash slashed Schuldt with his stick and was assessed a two-minute minor penalty for slashing.

At the UND bench, NCHC on-ice official Todd Anderson told an irate Berry, “I saw it.” Instead of reviewing the play, we played on.

“I’m very, very, disappointed,” an upset Berry said in the post-game press conference. And again, I’m not going to get in any trouble here by making a comment, but that was that was a knee-on-knee that should have been reviewed. We have a protocol in place and it wasn’t reviewed and I’m very disappointed in that. It’s not the result of the game that I’m alluding to. It’s one of those things where you know where anything is 50/50 like that at that time in the game has got to get reviewed, and we have that in our protocol.”

Berry was asked why the play wasn’t reviewed? “They just felt it was a clean hit,” Berry said.”

When asked about Mismash’s status, Berry said, “He will be out.”

Here’s the video of the play in question.

1) It's knee on knee
2) Congrats on getting the slashing call on UND (didn't miss that)
3) Even the SCSU player knows its knee on knee and should be expecting a penalty
4) Refs were way too confident after missing a clear as day kneeing pic.twitter.com/3L8vV4dq0o