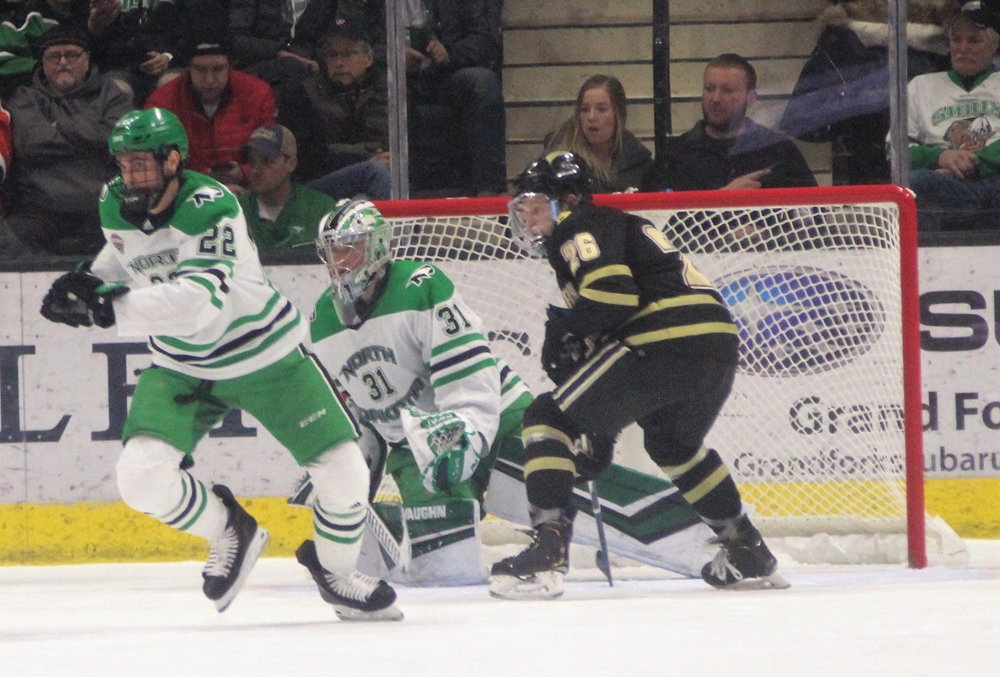 Grand Forks, ND –The University of North Dakota inched closer to winning its third-ever Penrose Cup with a 3-1 victory over Western Michigan University. With the win, UND maintained a six-point lead over second-place Minnesota Duluth with three games remaining.

Friday’s game felt like a playoff game, tight-checking, defensive-minded. There was very little time and space. Finally, at the 09:52 mark of the second period, freshman forward Judd Caulfield would score his fourth goal of the season (Video embedded below). Three minutes and 29 seconds later, Junior defenseman Matt Kiersted would give the Hawks 2-0 lead.

At the 04:35 mark of the third period, the Broncos would get on the board with a goal from senior forward Dawson DiPietro would score his 12th goal of the season.

After watching junior goalie Peter Thome start seven games in a row, sophomore goalie Adam Scheel re-took the net against the Broncos. In his first game action since January 24, 2020, Scheel was impressive stopping 26 of 27 shots to win his 18th game of the season.

If Scheel was bitter for being benched, it didn’t show in the post-game press conference. Scheel seemed to take in all in stride.

“Relationships don’t change regardless of who is in the net,” Scheel said. “No matter what Peter was always a great teammate. No matter who’s in the net. You kind of learn from a guy like that. He’s a great guy in the locker room, and he’s one of my really good friends. He was always supportive of me so I did the same thing.”

While Thome was the man between the pipes, Scheel worked hard and earned another start.

“He had a good, two, or three weeks of practice here,” head coach Brad Berry said. “We look at how goalies have done against the other teams and he was outstanding in Western Michigan. Peter Thome has been playing outstanding as well. We lost the game and it wasn’t Peters fault that we didn’t get the result we wanted in St. Cloud on Saturday night. This was an opportunity for another guy to go in. I think it was a combination of a lot of things but mostly Adam staying sharp and working his tail off in practice.”

Note: of the eight NCHC goalies that have played 19 or more games, Scheel still has the top goals-against average (2.03) in National Collegiate Hockey Conference.

Jordan Kawaguchi was held scoreless for only the seventh time this season. Kawaguchi had a five-game points streak halted.

Freshman forward Judd Caulfied has scored four goals this season, three of them have come against the Broncos.

With his sixth goal of the season, Matt Kiersted (6g-22a—28pts) is second on the team in points.