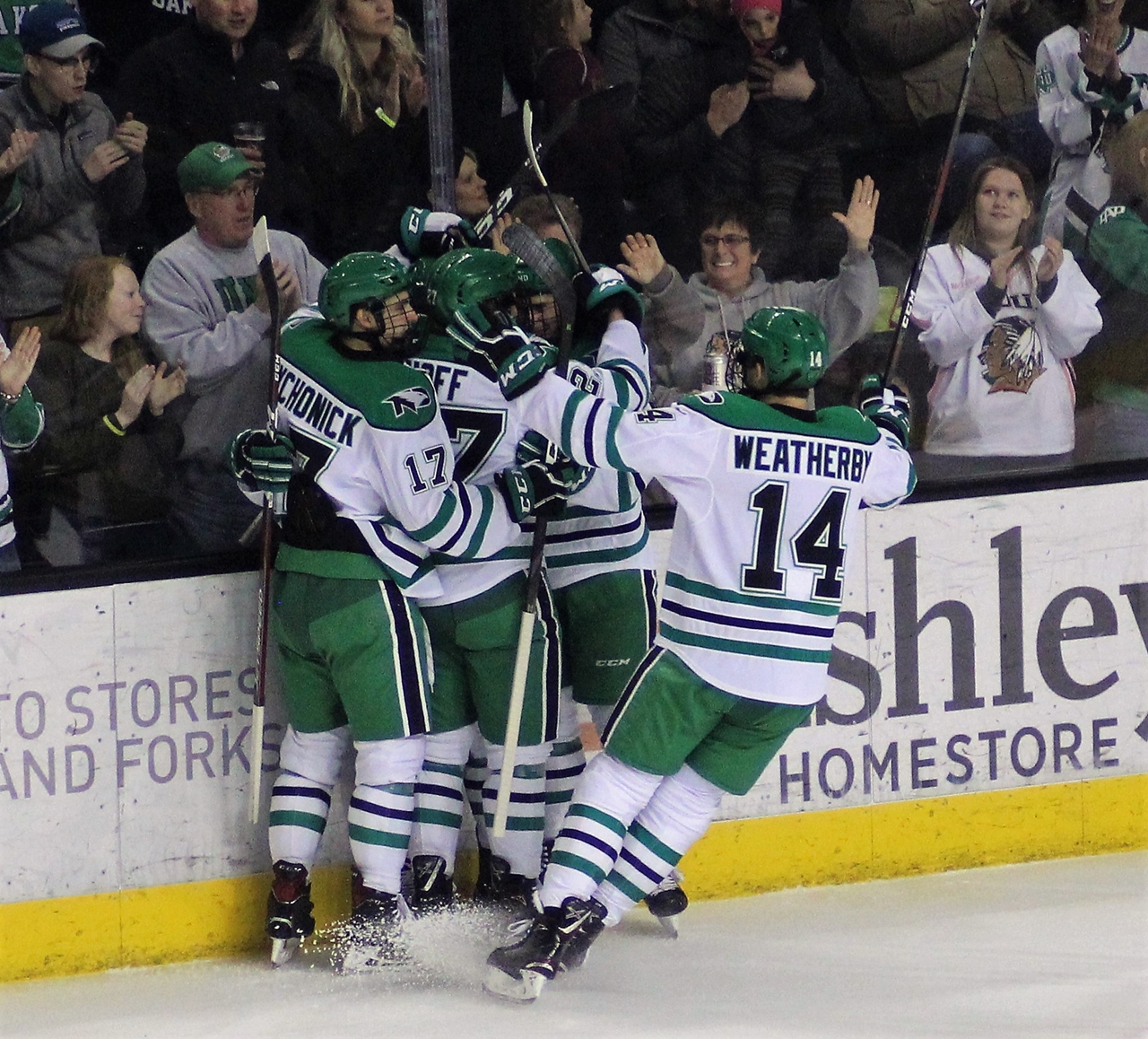 On Saturday night, the University of North Dakota hockey team honored five seniors from the class of 2019. When the night was over, those five seniors had played their final game at Ralph Engelstad Arena. There are no more home games for the class of 2019. Next weekend,  UND is headed to Denver, Colorado, to take on the Denver Pioneers in the first round of the National Collegiate Hockey Conference playoffs. This will be the first time in 17 seasons, UND has played on the road for the first round of the conference playoffs.

On Saturday night, to honor the senior class, UND head coach Brad Berry put all of the seniors on the ice for the game’s opening faceoff. Thirty-seven seconds later, senior Nick Jones scored the game’s first goal. It didn’t take long for that line to develop some chemistry. After their opening shift, the coaching staff kept that line together.

“It was one of those things where, initially we were going to roll four lines, and they were each on a different line,” Berry said. “Rhett, he had a lot of pace tonight. I think he was feeling it from last night. Jonesy knew it was the last game here, and Jackson Keane brings a lot of speed to that line. So, they had chemistry together.”

In the third period, the Hawks would take a 4-2 lead with goals from Cole Smith and Gavin Hain. From there, things would get testy. There was a scrum in the Omaha end and then UND got into penalty trouble. When it was all said and done, Smith ended up with a two-minute roughing penalty and a 10-minute misconduct. That lapse in discipline ended up costing UND. The Mavericks would tie the game with goals from Nate Knoepke and Tristan Keck. Those penalties didn’t sit well with the UND coaching staff.

“When you’re up 4-2 in a game, when emotions start getting high, we have to have more discipline,” Berry said. “We’re in the lead, you might have to take a punch to the head and, play to the next whistle. Get out of all that stuff. They scored couple goals in the third period to give us that momentum and we can’t have them in the box. And there again, we got to make sure that we learned from having discipline and not having those guys in the box.”

After three periods, the game was tied 4-4. The overtime period didn’t last long. Sixteen seconds into overtime, Jordan Kawaguchi made up for a previous mistake by scoring the game-winning goal.

“That turnover was on me,” Kawaguchi said. “I take responsibility for it.”

Grand Forks Herald hockey beat writer Brad Schlossman had an interesting tidbit in his Saturday morning blog post. UND has scored in the opening four minutes in 6 of the last 18 games (a third of them). The Fighting Hawks are 6-0 in those games. After Saturday’s quick start, you can make that 7-0.

VIDEO: Watch the game highlights as @UNDmhockey beats Omaha 5-4 in Overtime to complete the sweep on Saturday at the Ralph.#UNDproud @TheNCHC pic.twitter.com/6yGRVSIIoY