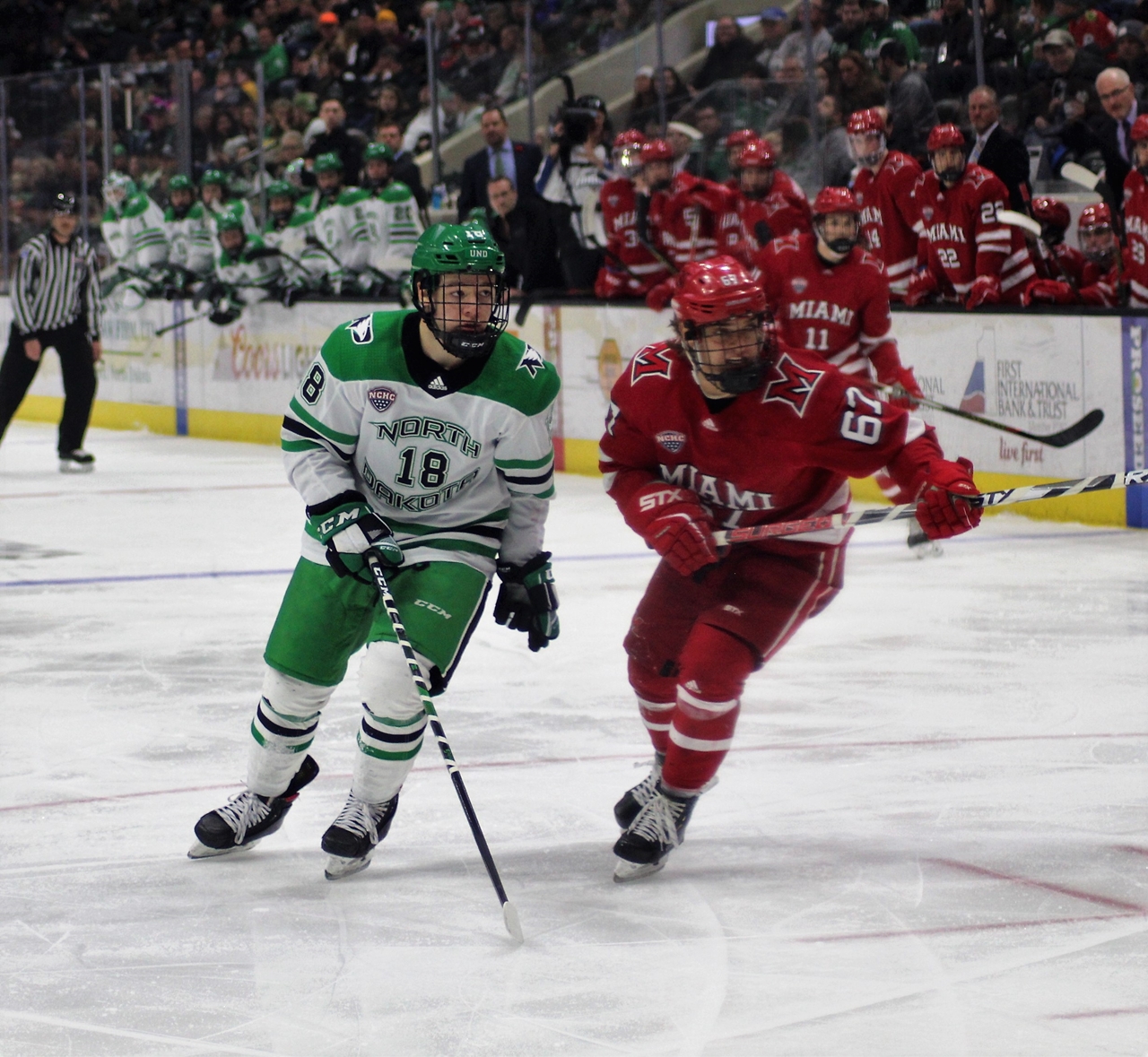 During the last two games, the University of North Dakota has been unable to put together a complete lineup. On Saturday, the Fighting got some of their injured players back. After missing two games with undisclosed injuries, Judd Caufield and Ethan Frisch returned to the lineup. A welcome relief for the Fighting Hawks.

“Well, we pointed those guy out in the locker room after the game,” UND head coach Brad Berry said. “When we desperately needed guys to come into the lineup, they both dug in and helped us out immensely today.”

Having an extra d-man helped the Fighting Hawks out a lot. After playing two games with only five d-men, UND was again able to have three defensive pairings. Frisch joined defenseman Josh Rieger on the third defensive pairing. The extra man appeared to help. Especially during the first and second periods, with junior defenseman Jacob Bernard-Docker making two straight trips to the penalty box.

At the 13:15 mark of the second period, Collin Adams would score a power-play goal from the goalmouth. Drawing assists on Adam’s goal were Jordan Kawaguchi and Matt Kierstand. Kawaguchi continued his scoring streak as he has recorded at least a point in every game, the only player left in the pod that can make that claim.

There’s a log jam at the top of the NCHC points race. With the assist, Kawaguchi joins UMD’s Nick Swaney, WMU’s Chayse Primeau, and teammate Shane Pinto for the league lead in points.

The Hawks slim 1-0 lead would slip away in the third period. With the Hawks hemmed in deep in their zone, Bulldogs forward Noah Cates would get the equalizer at the 07:12 mark of the third period. Drawing assists on the Bulldogs goal, Luke Mylymok, and Louie Roehl.

With the games winding down, the Hawks would get the game-winning goal from Grant Mismash with 48 seconds remaining in the game.

“I figured if I could get in front of that d-man and get a stick on it, there would be a good chance of it going in,” Mishmash said. “I was lucky enough that it went in.”

This is a rivalry series, one the fans and the players look forward to.

“We don’t like them very much,” UND Jasper Weatherby said during the second intermission.

“It was a good 60-minute game for us,” Berry said. “Big emotional win, we can’t have a letdown tomorrow.”

Duluth only picked up one league point in the last three games. On the flipside, after getting one point in three games, UND has won three games in a row. This is the final regular-season game between the two teams, UND took four of six points from the Bulldogs this season.

With his assist today, senior defenseman Matt Kiersted has a six-game point streak (1g-6a–7pts), the Elk River Minnesota native has (2g-7a–9pts) on the season.

With the win today, Adam Scheel is the first goalie in the NCHC to win five games. Scheel has the second-best goals-against average in the NCHC with 2.13.