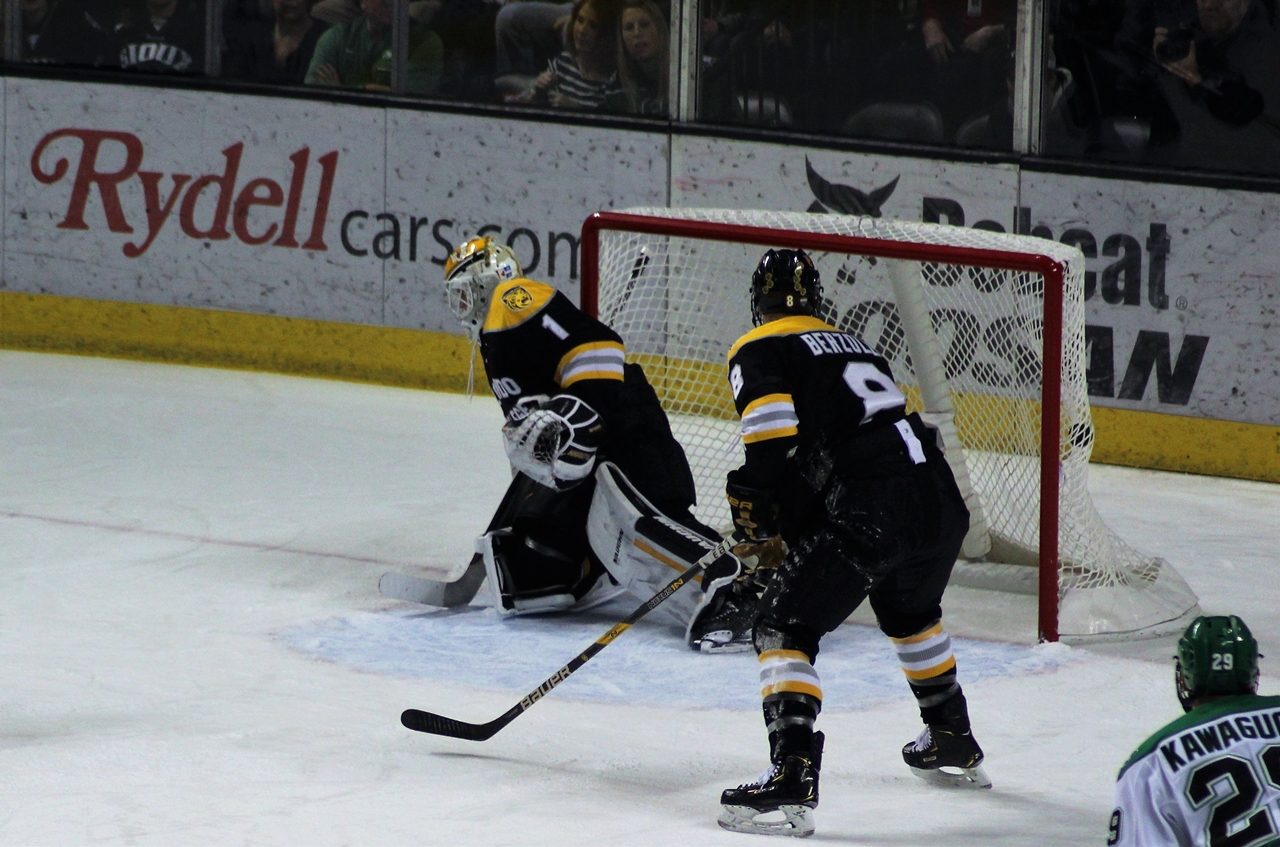 Grand Forks, ND – The University of North Dakota hockey team entered Friday’s game looking to end a three-game losing streak. After getting swept weekend in Buffalo, NY, the Fighting Hawks were all business as they took the ice against the Colorado College Tigers.

In the first period, UND came out and pushed the pace and scored on a power play marker from senior forward Nick Jones. After one period it was 1-0. The Hawks outshot the Tigers 11-7 in the first period.

The Tigers would tie the game with goals from Westin Michaud, Erik Middendorf. The fans started getting antsy. They’d seen this act before. Things would get worse, at the 03:01 mark of the third period, sophomore defenseman Gabe Bast was assessed a five-minute major and a game misconduct for contact-to-the-head. Bast caught C.C. Tigers forward Alex Berardinelli with a high hit at center ice.

Post-hit, Berardinelli laid on the ice for a significant amount of time. Eventually, Berardinelli would go down the tunnel, and wouldn’t return to the game. There’s a very good chance that Bast is going to be suspended for the hit. NCHC Head of Officials Don Adam was at the game. After the game, head coach Brad Berry had no comment on the hit.

“I haven’t looked at it on replay yet, Berry said. “Obviously, it was a high hit. But, it’s one of those things what deemed a five-minute major and it is what it is but I haven’t seen it the replay of the hit.”

Here's the Gabe Bast hit from Friday's game. Bast was given a five minute major and a game misconduct. pic.twitter.com/cVNgbQIVbK

Twenty-six seconds later, former UND forward Chris Wilkie would score on the power play to give C.C. a brief 3-2 lead. When his name was announced over the PA system he jeered by the hometown crowd.

At the 14:14 mark of the third period, Jordan Kawaguchi would score the game-tying. At the end of regulation, the game was tied 3-3, sending the game to 5-on-5 overtime. Post-game, Kawaguchi commented on his game-tying goal.

With 45 seconds remaining in the overtime period, junior forward Ludvig Hoff would tip in a Jacob Bernard-Docker shot past Tigers goalie Alex Leclerc.

Even though UND faced some adversity in the third period, they never gave up. After the five-minute major was over, the Hawks took control of the game and didn’t let the Tigers back in the game.

“It’s one of those things this year we haven’t been rewarded a whole lot for our effort in the offensive zone and then they take the game over with two power play goals tonight,” Berry said. “The biggest part of the game I think was getting the kill on the rest of the five-minute major and then getting back on the rails again and playing the right way.

‘It would’ve been very easily to have a lot of frustration and our game and deviate from what we do but they didn’t and found a way to score a tying goal. And then in overtime, just kept grinding it out. That was a message at the beginning of the week, was just keep working hard and grind and doing the things we do and eventually you get rewarded.”

Since December 1, UND is 19 for 22 on the penalty kill. That’s tied for third in the NCHC.

During the same time period, the Minnesota-Duluth Bulldogs is perfect on the penalty kill, killing their opponents last 26 man advantages.

Freshman goalie Adam Scheel is tied for second in the NCHC with a 1.81 GAA.

Seriously, it took 20 games for UND to score a goal during the second period an NCHC contest.