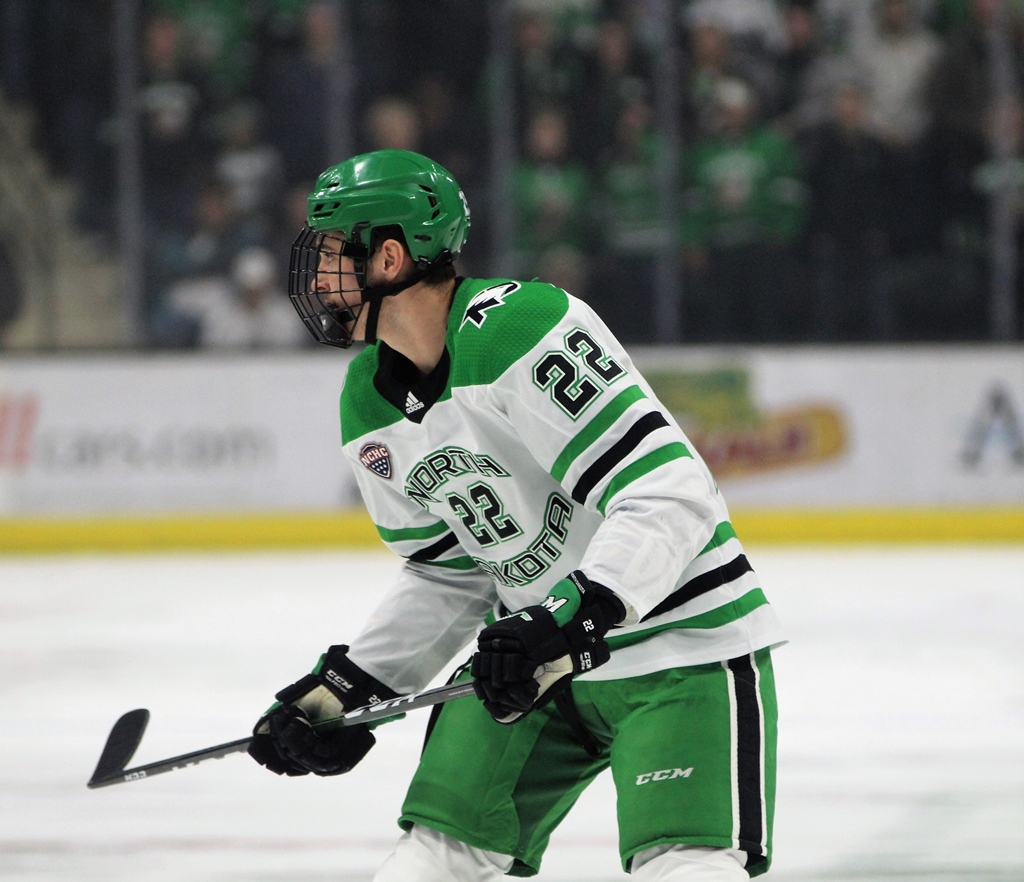 Sometimes change is good. On Thursday night, the University of North Dakota men’s hockey changed up their forward lines. The first thing that jumped off of the lineup chart; Brad Berry broke up the top line of Grant Mismash, Collin Adams, and Jordan Kawaguchi. In its place, Berry put Riese Gaber, Shane Pinto, and Kawaguchi on the top line. That line would finish with two goals and four points.

Through four games, UND hasn’t played bad, Berry just wanted to get another look from his forward lines.

“We just wanted to try and push our guys a little bit, in situations of playing with other guys early in the season trying to see if we can build some chemistry, Berry said. “I thought that line (Gaber, Pinto, and Kawaguchi) played pretty well. I thought all the lines play pretty well getting some chances. We had a lot of grade-A and grade-B chances in front of the net. We just didn’t finish tonight.”

The changes would pay dividends. With the Bulldogs clinging to a one-goal lead, freshman forward Riese Gaber would score his third goal of the season.

At the 12:24 mark of the third period, Pinto would give UND a brief 2-1 lead.  From the left faceoff dot, Pinto pounded home a one-timer from Matt Kiersted. Through five games, Pinto leads the Fighting Hawks in scoring with (3-g-4a–7pts).

That lead didn’t last very long. With 3:25 remaining in the game, Bulldogs forward Cole Koepke picked up a buried the equalizer. Tie game 2-2.

“I thought we did a pretty good job of weathering the storm,” Berry said. “Then I thought, from the 10-minute mark of the first through the rest of the game. I felt we did what we had to do. Heavy on the fore-check, and pucks in the offensive zone. We didn’t play a lot in our end of the rink. I thought we did all the right things to deserve a win tonight, and we didn’t. We didn’t close out the game tonight in the last few minutes, and we need to be better at that.”

In the post-game press conference, Gaber echoed his coaches sentiments.

“I think the two things that have killed us so far have been our discipline, and we gave up a few late goals,” Gaber said. “Good teams find a way to win no matter what. So, just managing the game and learning to close out games is going to be huge for us. Once we kind of figured out, I think we’ll be rolling.”

The @UMDMensHockey ?️ ties the game for the Bulldogs

For the second game in a row, UND’s lack of discipline proved costly.

“We went up 2-1 late in the game, and then we take a penalty in the last few minutes of the third period there to give them momentum,” Berry said. “They didn’t score, but they got momentum a little bit. Then a d-zone face-off, we didn’t get a clear there, and got kind of hemmed in, and whack the puck is in the net. It’s one of those things and details on how to close up games come from discipline and finishing off on a d-zone faceoff clear.”

The two teams would play to a 2-2 tie. The Bulldogs would take the extra point in the shootout.