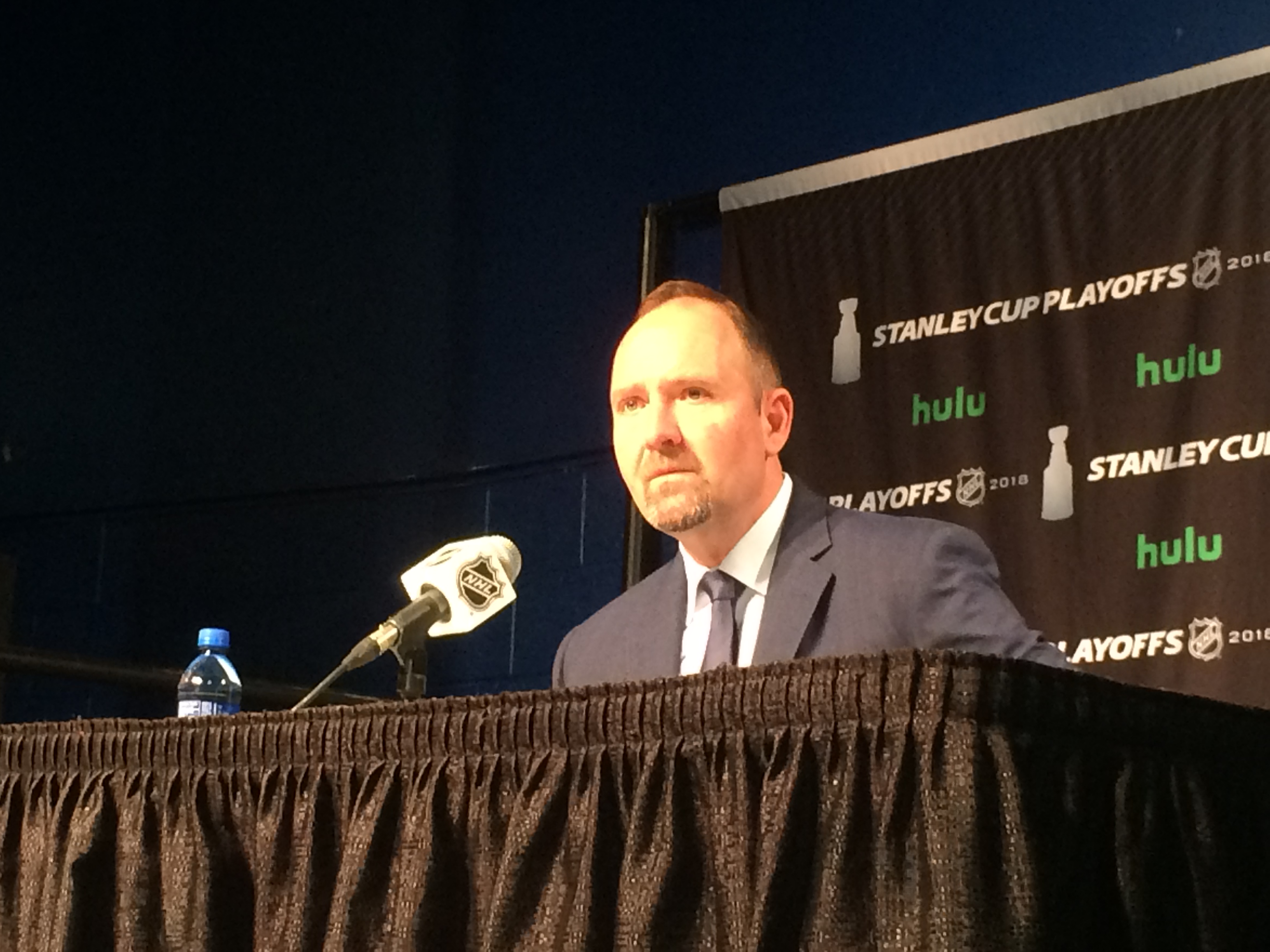 Is anybody going to surprise anybody this playoff season? Looking at the matchups, it seems surprisingly easy to call most of the series. That Washington-Columbus one might be a bit sticky, and who knows what Vegas is really capable of, but otherwise, it’s fairly obvious who’ll win.

Until you get to the Sharks and Ducks. The Sharks were arguably the better team all year. Most of the time, they led the Ducks. In fact, they were so comfortably out front that the focus for Anaheim wasn’t on their dorsal fin but rather on the Kings and the whole hope to get into the postseason. San Jose was just kind of doing their thing up there—and by “up,” I mean up North and up the standings.

Things changed in the last week, and suddenly the Ducks were real. They didn’t win the Division, but neither did they squeak in to the post-season. They took second in the Pacific. That must have meant they were a better team than the Sharks, right?

Not so fast. And not in the first period of the first game of their playoff series. San Jose mostly possessed the puck. They outshot the Ducks. Nobody scored, but the poise of the Sharks was clear. The Ducks fortunately had John Gibson back from one of his many mini-breaks for injury, and he made two spectacular saves to keep his team in it. The first came off Pavelski, who whacked the puck rather than shot it, and Gibson sprawled over and kept it out with his chest. Another came when Brent Burns took a shot from the point and Gibson got it with his blocker after picking it up late.

The Ducks were penalized twice. Once they were excellent on the PK, clearing the puck all the way down four separate times. Once, however, the Sharks got four shots on goal in the first minute. None in the second, but you don’t want to tempt fate too much.

They would do that as the game went on, taking seven minor penalties to the Sharks’ four. It was a theme in their postgame comments.

Francois Beauchemin said, “Way too many penalties. When I look back at when we had success down the stretch, we didn’t take many. We were taking one or two a game, that’s it. Tonight was just uncharacteristic for our team to do that.”

Uncharacteristic of late. Quite in character with what the team did most of the early, and middle, part of the year.

Coach Carlyle of the Ducks added, “You can’t take seven minors and give the opposition the chance to practice their power play. It takes any momentum that you had building in the game and flips everything in their favor.” He did point out that the last penalty came with time expired in the third period.

Coach DeBoer of the Sharks said, “This is a brand new time of year. You can throw out regular season records. . . . We take a lot of pride in our discipline. We play hard, but we play whistle to whistle. . . . We’ll try to make you play with the power play.”

The Anaheim team was at it again in the second, taking an early penalty in the form of Cogliano. Then they added to it with one to Getzlaf, for slashing, and the Sharks immediately scored on the five-on-three. So fast that they had 1:50 left of power play time after. They hit a post, or it would have been quickly 2-0.

The shots meanwhile slowly got out of hand in the Sharks’ favor, 17-10 by the time the game had about 12 minutes left in the second.

But enough game action. Why was this happening? Because the Sharks, even missing Joe Thornton (who took warmups but did not play), are a big, confident team. They can pass with the Ducks, too, so the long game of diagonal passes that Anaheim uses to get behind defenses doesn’t work so well. Stretching the ice puts Sharks’ opponents at risk of Sharks’ passes, rendering one of the Ducks’ main tactics suspect.

The Sharks still have the tendency to be conservative. In the first period, for instance, Joonas Donskoi had a clear path to the net, but inexplicably passed the puck backwards, but they’re much more likely to fire away than they were in times past. Again, good thing for Gibson, who held the Ducks in the game and gave them a chance to use their own offense.

Getzlaf, as he so often is in the playoffs, was monstrous, running all over the ice, hitting, passing the puck. Perry made a couple of special passes himself. On the night, their line, with Rakell, contributed three shots.

But the Sharks were taking over by midway through the second. They scored doing precisely what I said above was one of their strengths—the long diagonal. Brenden Dillon put the puck across the ice and off the boards. It was picked up by Pavelski and passed across the ice to Kane, who deked through the crease and slipped it into the net just before losing the handle.

Burns scored a third San Jose goal shortly after. He was at the blueline and took a chip shot straight in. He’d done this before, the result being a loud “thunk” as the puck went off Gibson’s leg pads. This time, it went between the screening legs of a Sharks player, and straight past Gibson, who didn’t seem to see it. He closed the five-hole in a late-reaction play, to no avail.

The Sharks poured in 17 shots in the period, helped, of course, by the penalties. The Ducks responded with nine. The Sharks ended period two up by double, 25-13.

The Ducks tried to bully it up a bit about three-quarters of the way through the period. Perry went to the net and ended up taking a roughing penalty for grabbing Erik Fehr around the neck. Getzlaf came in and ended up in a jawing match with Burns. Again, you could put this down to Getzlaf showing his leadership. The spark quickly died as the Ducks had to kill the penalty on Perry.

Period three saw the Ducks go backwards, literally, from the first. Kesler had the puck in the slot but put it out to the point and down to his own end of the ice, inexplicably, from about fifteen feet in front.

They then tried to pour it on, with the obvious goal of cutting the deficit early to a manageable two goals. The puck was fired across ice at Jones, who bobbled it off his gloves. Brandon Montour rushed in from the point to sweep at it, getting a piece and putting it back into the netminder’s outstretched left pad.

Nick Ritchie put the puck cross-ice to Henrique on the rush, a diagonal pass that Henrique couldn’t get a hold of. Other similar plays demonstrated the Ducks’ resolve to break the shutout and get something going. Nothing worked.

Sitting quietly in their hotel rooms in Las Vegas, the LA Kings had to be watching this thinking, “Yeah, we know what it’s like to be frustrated.” Or maybe they weren’t sitting quietly. What happens in Vegas, stays in Vegas, after all. Up in the press area, I was thinking, “C’mon guys, I don’t want the NHL playoffs to be over in SoCal in the middle of next week.”

This may be completely obvious, but you can’t really replace somebody like Cam Fowler, out two to six weeks with a shoulder injury. The Ducks tried, Montour carrying the puck quite a bit and Manson doing the same. This only marginally worked. Montour has the ability to rush. Manson lost the puck at times, and often resorted to a long slapshot when he got inside the blueline. Once, he almost fooled Jones as a puck went up high and was awkwardly knocked away with the blocker, hitting the end glass. But generally, the offense stalled before getting into the zone to set up.

No scoring took place in the third period, but lots of penalties were called, especially at the end, where Corey Perry was up in the face of Brenden Dillon. In the end, the game was 3-0

Beauchemin “I can count on one hand how many good shifts we had the whole game. We have to be better than that.”

Rakell diagnosed, “We’ve got to play more to try to get on the inside of them. When we had the puck, we played on the outside and didn’t create enough scoring chances. Maybe put some more pressure on them. Work more as a group.”

Getzlaf was in his “settle-it-down” mode: “We did OK in the first period. We didn’t really come out flat, but we didn’t execute with the puck at a high enough level in the first period, and in the second we got chasing the game a little bit, resulted in us taking too many penalties.” Pretty simple diagnosis. He wasn’t panicking, saying, “It’s just one game. Best of seven,” but clearly, the Ducks need to be much, much better.

He said, “I thought we had great sticks tonight. We either blocked or broke up a number of plays by having good sticks. Our attention to detail was great tonight.”

Evander Kane scored both the first, and thus winning, and the second, goal. Pavelski assisted on both, with the first being on the power play.

Let’s allow Carlyle to give the full and final diagnosis: “We just did seem to have our legs or our hands or our minds tonight, all three checks, from our standpoint. We didn’t execute with the puck. We didn’t show any aggressiveness in our skating game, and we showed that we were weak mentally from the standpoint of undisciplined acts that we committed.”

He later said, “It showed up in all three zones.” Then he criticized his defensemen for being behind the net on the five-on-three and one line, unnamed, for staying out so long that three lines appeared against them.

The teams resume Saturday at 7:30pm. Anaheim needs to show much more than they did in game one if the series is to stretch to the next weekend.