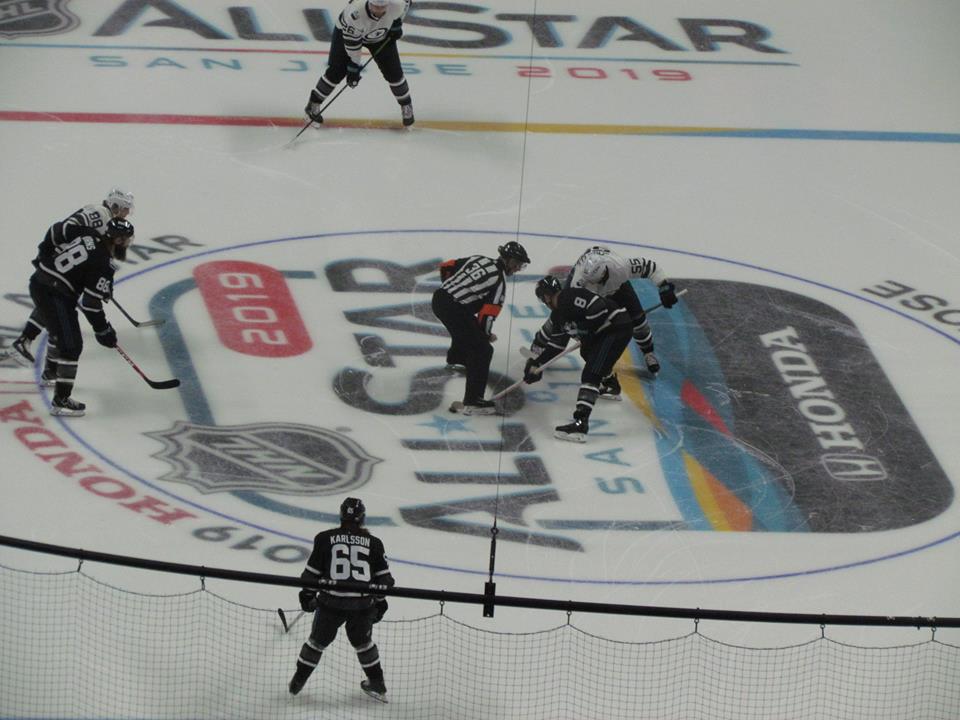 In the opening game of the 2019 NHL All Star Tournament, the Central Division walloped the Pacific, eliminating the Sharks’ squad by a final of 10-4.

Fortunately for the hometown fans, three of those Pacific goals belonged to their favorite trio of Sharks. Erik Karlsson scored twice, Brent Burns added another and Joe Pavelski picked up a pair of apples. Karlsson’s second goal was exactly what the fans were hoping to see. A long pass from Burns to Karlsson, who then fed Pavelski before Pavelski returned the favor to Karlsson for the wide open goal.

Even with all their scoring though, one could argue the most noteworthy play from Sharks players came when they didn’t score. On the opening shift, Pavelski had an opportunity for one of his famous redirect/deflection goals that Sharks fans refer to as a “Pavelskian Tip.”

Asked if he has thought about petitioning the league for a skills challenge deflecting pucks, Pavelski chuckled before proceeding to joke about the opportunity he had on that very first shift.

“It was funny how that first shift it just sort of happened,” noted the Sharks captain. “These two guys [Burns and Karlsson] are just always shooting at me. I knew it was coming. Made a good tip on it, it hit [Pekka Rinne] in the head. We were doing the virtual reality thing and talking about having tips and seeing what that’s like as a fan. [Tips] are something we just do out there, it comes natural. It’s a fun play for me to go to the net and try to get a stick on it.”

“I’m happy I’m the one shooting it and not standing where he does,” joked Karlsson, to which Pavelski replied, “especially when you see Burnzie miss the net last night.”

(Burns missed the net completely on his first attempt in the fastest shot challenge Friday night.)

After eliminating the Sharks’ Pacific Division, the Central would advance to the final game against the Metropolitan All Stars. The Metro took care of the Atlantic Division to set up the final matchup. In the end it was the Metro winning the tournament, led by the tournament’s MVP Sidney Crosby, who seemed rather healthy for having missed the skills competition due to illness.

As for the weekend as a whole, the players from around the league seemed to enjoy the atmosphere created by the fans in San Jose.

“I wasn’t really sure what to expect,” joked John Tavares when asked if he expected to hear boos after not signing with the Sharks during the offseason. “But this is a proud fan base, they love their Sharks. They always create a great environment, great atmosphere when we play here on the road. I wasn’t the only one booed, so I wasn’t too lonely.”

“They are a team that definitely feeds off their crowd,” chimed Keith Yandle, who played quite a bit in San Jose as a member of the Coyotes from 2006-07 through 2014-15. “You know when you come in here that it’s going to be a tough game. They get that extra sixth/seventh man with the crowd. You always know when they are going on the power play when the fans start going with the chomp. It’s definitely a fun place to play in.”

Another Atlantic Division star with loads of experience playing in San Jose is Detroit Red Wings goaltender Jimmy Howard. Rumors abound that the 34-year-old netminder will be moved by the trade deadline. Howard is in a contract year and the Red Wings are currently a long ways out of the playoff picture. The Sharks, meanwhile, make as much sense as anybody in terms of a potential landing spot for Howard. They are a playoff bound team and both goaltenders Martin Jones and Aaron Dell have struggled this season.

“I love playing here,” chimed Howard with a noticeable enthusiasm. “Even in the playoffs it was awesome with how loud this building gets. I remember it just being deafening in here, they love their Sharks. It’s a cool place to play. I enjoyed it when we were playing in the west with the rivalry we had.”

Perhaps the most noteworthy comment regarding the strength of San Jose’s fan base is when Pavelski mentioned how crowded their practice facility is on a regular basis. The Sharks have four sheets of ice in San Jose at their practice rink. They also have one in a nearby town of Fremont, and two sheets in Oakland. There is also a handful of other rinks in the Bay Area. Even still, Pavelski brought up the lack of available ice time.

“I got a kid playing youth hockey and there is not much available ice time for them. I mean they only skate a couple times a week. There are a lot of kids on the ice. There is a good youth movement going on here, kids are just loving to play the game. We could use more ice, there is a good passion for the game.”