The New York Islanders found the cure for what ails them: a team battling even more injuries than they are. Brock Nelson’s first career NHL hat trick helped propel the Isles to a solid 5-2 win over the visiting Columbus Blue Jackets at the Barclays Center Tuesday night. Ryan Strome and Mark Strait scored the other goals for the Islanders while Thomas Greiss made 18 saves to earn the win.

The Islanders were dominant for most of the first period and broke out on top on Strome’s fourth goal of the year at the 5:03 mark of the game. It was the first goal since November 30th for Strome who was very relieved to see the puck go in.

“It was shot on net. I came right off the bench and got a stick on it and it went in,” Strome said. “Sometimes when it’s not going well for you, you’ve got to get back to basics and go to the front of the net.” 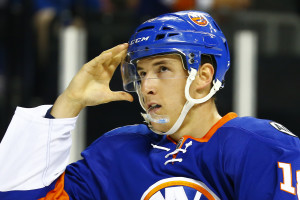 After the Blue Jackets tied the score on a goal by William Karlsson midway through the first period, Nelson took a pass from Thomas Hickey and lifted a wrist shot past Jackets starter Anton Forsberg to give the Isles a 2-1 lead at the 12:00 mark of the period.

The Isles dominated the first 20 minutes of the game, outshooting Columbus 17-5 and spending lots of quality time in the offensive zone.

“To a man, everyone just wanted to win their one-on-one battles,” Strait said when asked about his team’s strong defensive play tonight. “We haven’t done that the last couple of games, but tonight, we did that. We competed down low and I think everybody was pretty aware in the defensive zone and we didn’t give up anything big.”

The pace slowed in the second period and the Blue Jackets evened the score on a goal by David Savard at 13:49. Savard hit a bouncing puck that surprised Greiss and made it a 2-2 hockey game.

But the Islanders answered back when Nelson struck again after taking a pass from Anders Lee and beating Forsberg to the short side with a quick shot at 17:29 of the middle stanza.

The Islanders extended their lead early in the third period when Strait potted his first goal of the year on another shot that squirted through the pads of Forsberg who struggled mightily at times tonight.

An empty-net goal by Nelson ended the scoring. The big Warroad, Minnesota, native won a race for the loose puck and was just able to dive and just push it into the empty cage.

“It’s pretty great,” Nelson said when asked about his first career hat trick. “It’s a tough league to score in. It’s something I’ll remember. Some guys don’t ever get the opportunity.”

Isles head coach Jack Capuano was much happier with his team’s performance tonight after a shaky effort in Philadelphia last Saturday. “It comes down to your work ethic, it comes down to the grit, determination and desperation that’s in your game,” Capuano said. “Your work ethic is going to dictate the scoreboard at the end of the night. So that was the message going into the game and that’s always been the message and tonight I thought we worked extremely hard and we had a good first period, extended zone time and we got rewarded for it.”

The Islanders resume their home stand Thursday night when they take on the Rangers at the Barclays Center at 7:00 pm.

The Islanders are now 3-2-0 in their black 3rd jerseys.

The win improved the Islanders record against Metropolitan Division foes to 8-3-2.