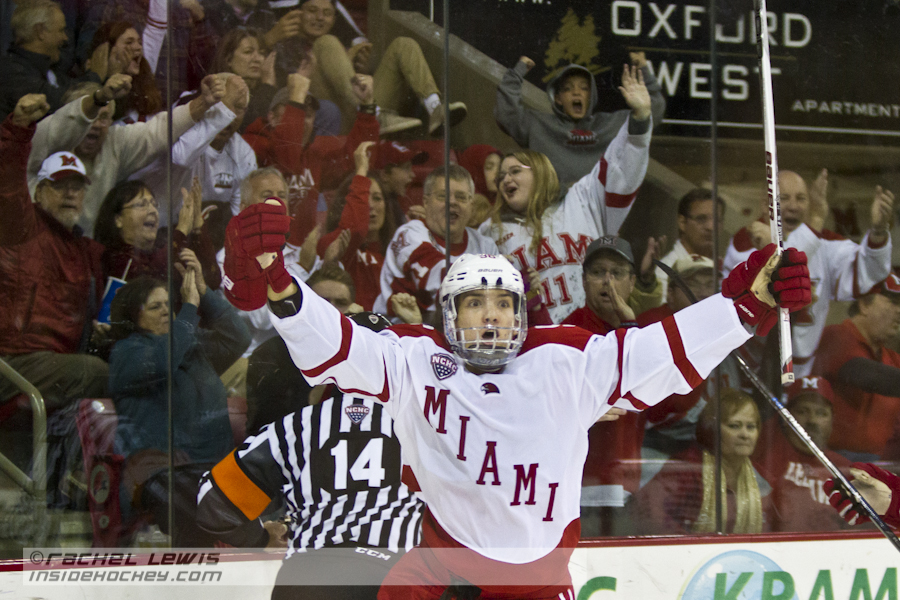 There are no more unbeaten teams left in the NCHC. Last weekend, The University of North Dakota lost 3-1 to the Wisconsin Badgers in non-conference action. Without further adieu, here’re this week’s power rankings.

This past weekend, the University of North Dakota split their weekend series with the Wisconsin Badgers (1-3 L, 3-1 W). After watching the Badgers play this past weekend, I am convinced they’re a much better team than people think. Also, the Badgers will win more than four games this season. Fans can snicker about them beating UND, but there other teams that suffer the same fate. This weekend, UND entertains the Miami University RedHawks.

This past weekend, the St. Cloud State Huskies were idle. This weekend, the Huskies travel to Kalamazoo, Michigan, to take on the Western Michigan Broncos. . Junior goaltender Charlie Lindgren was named the NCHC’s Player of the Month. Lindgren was (5-2-0, 1.43 GAA, .947 SV%).

This past weekend, the University of Denver Pioneers swept (5-3 W, 3-1 W) the hapless Colorado College Tigers. This weekend, the Pioneers travel to Duluth Minnesota to take on the UMD Bulldogs. The Pioneers begin a three-week stretch where they will be on the road every week.

A week after being swept by the SCSU Huskies, the Miami RedHawks returned to the win column by sweeping the Western Michigan Broncos (2-1 W, 2-1 W). This weekend, the RedHawks travel to Grand Forks, ND, to take on North Dakota.

A week after sweeping the UNO Mavericks, the Western Michigan Broncos laid an egg against the Miami RedHawks losing (1-2 L, 1-2 L). The Broncos look to avenge that sweep against the SCSU Huskies.

This past weekend, the Colorado College Tigers were swept (35 L, 1-3 L) by the Denver Pioneers. So far this season, the Tigers have been outscored 15-36. This weekend, are idle.

After a tough weekend of getting swept by Western Michigan, they rebounded at home and looked like a team that could make it far in the NCHC playoffs and NCAA tournament come March. Next weekend, Omaha is off but travels to Oxford to face a Miami off their bye week.

With former WCHA rival Wisconsin exposing a North Dakota team that was not playing to their full potential Friday night, Saturday night was a much different story as North Dakota returned to playing their style of hockey. Now I don’t want to say that it was because Drake Caggiula returned on Saturday night after his one-game suspension, but his impact on the UND roster is felt when he is in the lineup and when he is not. Next weekend, UND hosts Miami at the Ralph.

Yet being another team tied for first in the NCHC standings at 6 points, SCSU spent last weekend resting up and taking a bye week this early season to mend any bumps and bruises that they might have. With a return to their normal schedules this week, SCSU goes on the road to play a sneaky Western Michigan team who may just be the dark horse, if there even is one, in the NCHC.

Denver was another team who returned to their winning ways last weekend after a previous weekend of tough nonconference matchups against BC and BU, where they would lose both games by one goal, including one in overtime. Now I know a home and home with their struggling in-state rival, Colorado College, everyone expected Denver to come out with all six points, which they did, however, CC pressured Denver pretty well in the Friday night game up until Denver closed the game with their empty net goal to make it 5-3. This weekend Denver makes the trip to Lake Superior and play the Bulldogs.

Miami is another team who returned to their winning ways this weekend after a home sweep of Western Michigan in two hard fought, low scoring contests. Since starting NCHC play two weeks ago, Miami only has 5 total goals scored in four games played as to allowing 8 in that same time period. With a road trip to North Dakota looming, Miami better be ready to find the net, or they very likely won’t come out of North Dakota with any points this weekend.

The Broncos were not able to pull off a win this weekend, but still played rival Miami real tough. I’m still not convinced that this team can’t cause some headaches in the NCHC, however, the way they have played early this season is something to pay attention to.

For a team expected to be much better after the first month of the season, somehow Duluth still finds themselves in the top 15 of the USCHO ranks, undeserving in my opinion. For a team that is 1-3-2 in their last 6 games, things don’t get any easier for the Bulldogs with Denver in town this weekend.

The only team without a win in the NCHC, their NCAA tournament hopes have already turned to them winning the NCHC tournament in Minneapolis this March. The Tigers did show some signs of life Friday night, however, they still need to figure out a way to finish out games. At the rate things are going in Colorado Springs right now, I’d be surprised if they get 10 wins this season.