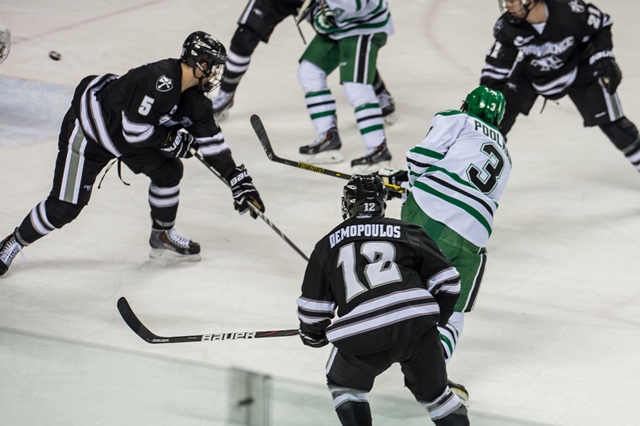 One team in the NCHC is still unbeaten after four weekends of play. Last weekend, Western Michigan swept the previously unbeaten, No. 2 ranked Nebraska-Omaha Mavericks. Without further adieu, here’re this week’s power rankings.

This past weekend, the University of North Dakota swept the winless Colorado College Tigers (5-2 W, 2-0 W). True to form, UND junior walk-on, third-string goalie Matt Hrynkiw was the story, again, as he recorded his second shutout of the season, that’s good for third nationally. This weekend, UND entertains the struggling Wisconsin Badgers (2-3-3) in a non-conference tilt.

This past weekend, the Western Michigan Broncos swept the previously unbeaten and No. 1 ranked Nebraska-Omaha Mavericks (2-4 L, 1-6 L). Based on these results, WMU should be rewarded for their efforts and tied for second with UMD and SCSU. This weekend, WMU travels to Oxford, Ohio, to take on fellow MAC brother the Miami RedHawks in an NCHC matchup.

There’s one thing for certain, UMD hasn’t skimped on their non-conference schedule. Last weekend, the Bulldogs split (2-1 W, 3-6 L) their weekend series with the UMass-Lowell River Hawks. This weekend, the Bulldogs travel to Omaha, Nebraska, to take on the Nebraska-Omaha Mavericks in a pivotal NCHC series.

The University of Nebraska-Omaha Mavericks entered last weekend’s series with an unbeaten 6-0-0 record. When the weekend was over, the Mavericks were swept (2-4 L, 1-6 L) by the UWM Broncos. This weekend, the Mavericks entertain the UMD Bulldogs in a critical NCHC series. Coming into the season, UMD and UNO were expected to challenge for an NCHC title.

This past weekend, Denver traveled east and was beaten by Boston College Eagles and Boston University Terriers (3-4 L, 4-5 L O.T.). This weekend, the Pioneers get a chance to right the ship against the winless C.C. Tigers.

As I mentioned last week, the Colorado College Tigers are having a very rough season. This past weekend, the Tigers were swept (2-5 L, 0-2 L) by UND. It doesn’t get any easier for the Tigers, this weekend, the winless Tigers play their cross-state rivals the Denver Pioneers.

Nodak Nation has still not tasted a loss under new coach Brad Berry. Third string, turned starter, Matt Hrynkiw is turning heads and putting up amazing numbers in his 6 starts going 5-0-1 with 2 shutouts. The freshman class is contributing in a big way as well as all of the goals in Friday’s 5-2 victory came from the twigs of freshman. Hopefully, for North Dakota, this parade of success continues with their first home weekend series of the season coming up this weekend when Wisconsin comes to town.

The Huskies are making the best of their early season rebounding from getting swept by Quinnipiac to sweeping Miami in their NCHC opener. This is a sneaky good team that will take advantage of the mistakes their opponents make. SCSU continues league play next weekend as they travel to face a usually overlooked Western Michigan team.

Omaha had a rough weekend on the road in Kalamazoo with their NCHC opener. Western Michigan battled hard Friday for a two-goal victory and would dominate Saturday winning 6-1. Omaha looks to make the rebound returning home to play a Duluth squad that is just 1-1-2 in their last four and has not opened up league play yet.

The Broncos jump the standings and power rankings this week after a very impressive home sweep of Nebraska-Omaha. Junior Aaron Hadley lead the way this weekend with 4 points (1g 3a) for the Broncos and look to take their early season success on the road to Oxford as they face the Miami RedHawks this weekend.

The Bulldogs are 1-1-2 in their last four games this season, but their split with UMass Lowell was nothing to be disappointed about, as they were a top 5 team in the polls. Finally being able to open up league play this weekend, UMD looks to get back their winning ways, but will have a tough time in doing so when they travel to Omaha and fade a very upset UNO team after getting swept last weekend.

After yet another tough non-conference weekend for an NCHC team, Denver would take Boston University to overtime Saturday, but fall to the national tournament runner-up. Denver would also fall in another hard fought one-goal contest Friday night to that other Boston school, the Boston College Eagles. Taking this into account, Denver looks for a confidence booster weekend as they play in-state rival, Colorado College in a home and home series for their NCHC opener.

One of just two NCHC teams that doesn’t have a winning record this season. Miami hasn’t looked like the Miami of old thus far this season. With a home series coming up against Western Michigan, the RedHawks look to gain some NCHC points before traveling to North Dakota next weekend.

Not much can be said about this CC team who probably couldn’t buy a victory, or barely even a goal over their last four games, three of which they did not record a goal. However, in state rival, Denver, usually brings out the best in them so hopefully CC can crack into the winners column for the first time this season. Heck, they probably just hope they score goals in consecutive games at this point.