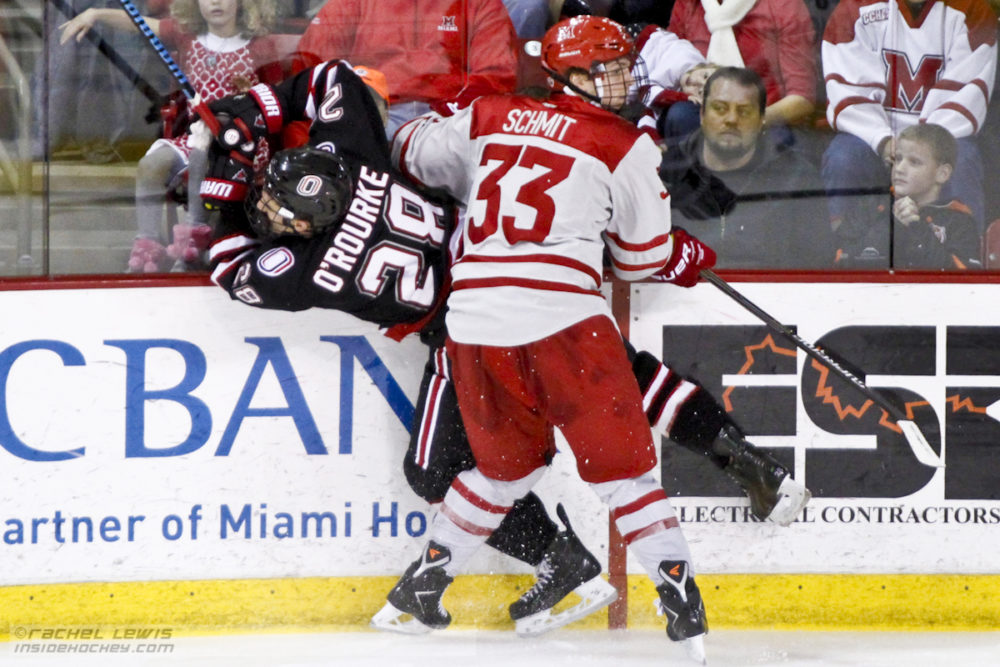 Two teams in the NCHC are unbeaten after three weeks of play. Because of that, both schools will sit atop the NCHC power rankings. I am sure that Zach and I will hear about it.

Checking the Inter-conference records for Division I college hockey, the NCHC has the second best record 24-14-6 (.614). Without further adieu, here’re this week’s power rankings.

After three weeks of play, UND is unbeaten. Handing wringing aside, UND has faced a bit of adversity early in the season, but It’s done little to slow them down. UND is down to their third-string goalie and missing a few top-six forwards.

When the month of October finally comes to an end, UND will have played one game at Ralph Engelstad Arena.

There’s a lot of excitement surrounding the UNO Mavericks. This past weekend, UNO opened the Baxter Arena in style beating the Air Force Falcons (4-1 W, 4-2 W). In six games, the Mavericks have outscored their opponents 20-9.

The Mavericks return most of their high-end forwards and are led by Austin Ortega *(7g-2a—9pts) and Jake Guentzel *(2g-7a—9pts).

This weekend, the Mavericks travel to Kalamazoo, Michigan, to take on the Western Michigan Broncos in an important NCHC matchup.

The Bulldogs are a hard team to figure out. The Dogs entered the season with a majority of their lineup that qualified for the NCAA tourney and lost to the Boston University Terriers in the finals of the NCAA Northeast Regional. So far this season, they’ve had mixed results.

The Denver Pioneers should again be in the running for an NCHC regular season title. The Pioneers return a solid nucleus of talented young players and veterans.

Early in the season, the Miami RedHawks are still trying to discover their identity. Last weekend, the RedHawks traveled to Canton, NY, and split their weekend series with St. Lawrence University (1-0 W, 3-5 L).

This weekend, the RedHawk will try to right the ship when they travel to St. Cloud to play the Huskies. This season, the RedHawks have been outscored (15-16) by the opposition.

After going 4-0 against WCHA opponents and recording three shutouts, Huskies goalie Charlie Lindgren was lit up last weekend. Against the Bobcats, Lindgren was (0-2-0, 4.50 GAA, and a .871 SV%).

This past weekend, the Western Michigan Broncos were swept (2-4 L, 2-6L) by the Clarkson Knights in Potsdam, New York. This weekend, the Broncos entertain the unbeaten UNO Mavericks.

First, there’s one thing that we know. The Tigers are the last place team in the NCHC power Rankings. In six games, the Tigers have been outscored 9-23. Since the 2102-13 season, the Tigers are 38-75-14 (.316). This weekend, the Tigers will try to right the ship when they entertain UND at the World Arena.

Still perfect on the season, the Mavs keep trucking right along as NCHC play draws near. As expected, Austin Ortega and Jake Guentzel are leading the way in points this young season with 9 a piece. If this team stays healthy, not many will be able to beat them this year.

1.) Undefeated, but ties against Maine, who UND has had some problems with in their barn over the past few years, and against the Highway 2 rival Bemidji State have them in a tie with Omaha for first.

Third-string goalie turned starter, Matt Hrynkiw, has been impressive early on after Cam Johnson and freshman Matej Tomek have gone down to injury. The line of Nick Shmaltz, Drake Caggiula, and Brock Boeser continues to wow the crowd and is putting up points like one would expect. Perhaps the surprise thus far, besides the goalie, is Bryn Chyzyk finding the net with his team leading 5 goals.

The Pioneers look tough once again this season, but will face their toughest test of the season thus far as they travel east for some Halloween fun against BC and BU before starting NCHC play in early November. In their four games so far, scoring has been pretty spread throughout the lineup  and goalie Evan Cowley has put up outstanding numbers with a .944 save percent and 1.51 goals against.

Yet another NCHC team in the top 10 in the polls is coming off two road ties against Notre Dame both by scores of 3-3. UMD has my favorite for the Mike Richter Award, NCAA top goalie, in Kasimir Kaskisuo. The Fin has played in all five games so far and has a below 2.00 Goals Against and just about a .930 save percent. Also, as expected early on, Tony Cameranesi and Austin Farley are leading the way in goals and points for the dogs this season.

Rounding off the NCHC teams in the top 10, St. Cloud had an impressive early season sweep of what seems to be a struggling Minnesota St. team. However, this weekend a little reality check for the Huskies will probably see them dropping outside the top 10 in both major rankings after getting swept out east by Quinnipiac scoring only three goals all weekend long. The Huskies start NCHC play next weekend, hosting Miami.

This is a team I don’t know what to make of yet. One minute they look like an ok hockey team and the next they look like complete garbage. Their 1-0 win on the road this weekend against St. Lawrence was impressive and a hard fought contest, but were not able to finish them off Saturday as they would fall 5-3.

Getting swept is something no team likes to have happen to them, but that’s exactly what happened to the Broncos on the road against Clarkson this weekend. With both of their goalies just putting up average numbers, things won’t get any easier as Omaha rolls into town to open up NCHC play next weekend. Hopefully the Lawson Lunatics, the Western Michigan student section, will be able to work some magic for their hockey team.

Well, things seem to be picking up right where they left off last season for CC as they have yet to win a game. Playing well against a really good team is a good way to build confidence for a team struggling to find ways to win, but their confidence may have just been broken into millions of pieces as Boston College came to town and crashed their high school kegger.