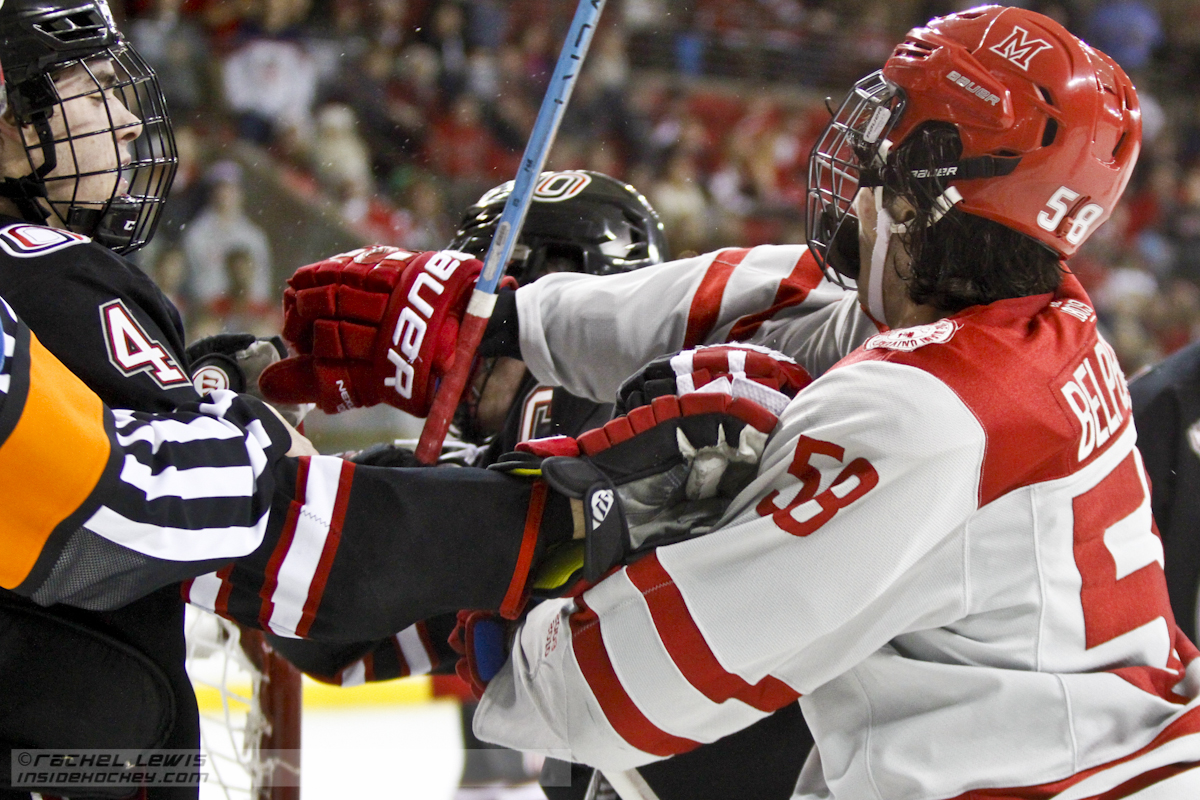 Welcome to the Inside Hockey Power Rankings. Taylor Seibel and I return for another season. Three of us will be doing the weekly NCHC Power Rankings column.

This past weekend, UND split their two-game conference series with Denver (1-4 L, 3-1 W).

This past weekend, the Bulldogs split (3-1W, 3-4 L) their weekend series with the Michigan Tech Huskies in Houghton, Michigan.

The Bulldogs are off till January 2-3, 2015 when they travel north to Thunder Bay, Ontario, to take on the Lake Head University Thunderwovles in a two-game exhibition series. Currently, the Thunderwolves are in sixth place of the West Division CIS standings with a 6-9-2 record.

This past weekend, the RedHawks were idle. The RedHawkshave have won six-of-eight games. Their only losses in the last eight games are to North Dakota and Omaha.

The RedHawks are off till December 28-29, 2014, when they play in the Florida College Hockey Classic in Estero, Florida. Miami’s first game is against Notre Dame.

In their last eight games, the Mavericks are 4-3-1.

The Mavericks entertain the University of Alabama-Huntsville Chargers on December 20-21, 2014.

This past weekend, the Pioneers split (4-1 W, 1-3 L) their weekend series with North Dakota.

So far this season, the Broncos have outscored their opponents 46-42 (+4).

This past weekend, the St. Cloud State Huskies were swept by the Nebraska-Omaha Mavericks. The Huskies are going through a tough stretch, they’ve lost four of the last five games.

There’s one thing for certain, the Colorado College Tigers are a bad hockey team. The Tigers got their first NCHC point of the season on 13th of December.

The Tigers entertain the USNTDP U-18 team on December 27-28, 2014. The Tigers schedule doesn’t get any easier, they travel to Providence College to play the Friars in a two-game non-conference series on January 3-4, 2015.

During the month of January, the Tigers schedule includes conference series against Nebraska-Omaha, North Dakota and St. Cloud State.

Even after a Friday night loss to Denver, UND rebounded and remained undefeated on Saturday night to close out the first half of their season. At 13-4-2, it is the best record to this point under Dave Hakstol since taking over as head coach.

UMD split with a very tough Michigan Tech this weekend on the road. The dogs continue to sneak up the standings and rankings.  I’d keep a close eye on them in the second half.

After an off weekend, the Red Hawks are going to take their holiday break and rest up for the second half push towards conference supremacy.

After a sweep of St. Cloud this last weekend, Omaha finds themselves just one point back from first place tie Duluth and Miami. Should be exciting to see how coach Blais pushes this team to the finish.

Looking very tough against North Dakota last weekend, Denver could also be another team looking to be in the national title hunt come April.

Well a disappointing first half to say the least against St. Cloud, even though they hold wins over Union, Minnesota, and North Dakota. The Huskies look for a major turnaround, much like North Dakota has been known to do in the past.

Coming off a hard fought battle against CC, the Broncos are in need of a regroup when they finally hit the core of the NCHC schedule in the second half if they want a return trip to Target Center in March.

Well, not much good can be said about the CC tigers, besides the fact that they didn’t lose both games this weekend, but didn’t win any once again either. One would have thought they may have had maybe 5 or 6 wins, along with Western Michigan and St. Cloud right now, but they just can’t seem to do things consistently well.

The RedHawks come in at #1 in my midseason NCHC Power Rankings.  Miami had some inconsistency early in the season, splitting series with Bowling Green and St. Lawrence.  However, the RedHawks have been a strong force in NCHC play, winning the games they should (sweeps over CC and Western) and splitting on the road in difficult environments (Duluth and North Dakota).  Their only home conference blemish came against Nebraska Omaha.  Miami ends the season playing Duluth at home, Denver on the road, and then finishes up with a series against North Dakota at home.  Those three series will likely have a lot to do with deciding who wins the NCHC title.

North Dakota sits at #2 in my midseason rankings.  They dropped a spot from last week due to an uneven performance against Denver.  With the exception of the season opener against Bemidji, the Sioux have won every game that they should.  That is a sign of a quality team with strong leadership.  North Dakota’s next conference series is at home against Duluth.  That series will likely tell plenty about the team’s chances of winning the conference title, as a sweep would put the Sioux in the driver’s seat, while getting swept would be devastating.

The Bulldogs sit at #3 midway through the season.  Duluth has faced a very difficult schedule, and they may very well have the best six losses in all of college hockey (Minnesota, Minnesota State, Denver, Miami, Omaha, and Tech…all teams ranked in the top 13 of the current pairwise).  The Bulldogs also have beaten some very good teams en route to a strong first half.  If the Bulldogs wish to compete for the NCHC title this season, they will have to put up strong results in three critical road series in the second half of the season: @ North Dakota, @ Denver, and @ Miami.

The Mavericks complete the top half of the league through the midway point.  Many overlooked Omaha coming into the season but Dean Blais’ squad has shown those people that was a mistake.  UNO has notched several key wins early this season, and the Mavericks look poised to fight for the conference title, especially considering that the Mavs still have three series left against Colorado College and Western Michigan (two of which are at home).  That gives Omaha a distinct advantage in the race for the NCHC championship.

The Pioneers sit just outside the top 4 in my midway point, but that doesn’t mean that Denver shouldn’t be considered a contender for the NCHC title.  DU has been strong in the opening half of the season, including victories at Duluth and at home against North Dakota.  The key for Denver in the second half will be how they handle their schedule.  While they have three more games against Colorado College, the Pioneers also face road trips to Omaha, North Dakota, and Miami.  If Denver can manage strong results in those series, they will contend for the title.  If not, they will likely finish in the bottom half of this extremely difficult conference.

The Huskies come in at #6 in my midseason rankings.  St. Cloud had a tremendously difficult schedule in the first half of the season, and unfortunately for the Husky faithful, SCSU struggled.  When playing in a conference as difficult as the NCHC, any mistake will go punished, and the Huskies have made their fair share of mistakes.  The talent is there for Bob Motzko’s team, but they will need to improve drastically if they wish to compete for home ice and perhaps an NCAA Tournament.

Western Michigan sits at #7 in the midseason rankings.  The Broncos have had their share of ups and downs this season, dropping key games to Canisius and Alaska, but looking dominant in crushing Ohio State and Union.  Unfortunately for Western, they play in the most difficult conference in college hockey at the moment, so it is difficult for me to see them competing for home ice.  They will be a strong spoiler late in the season, and just might cost one of the contenders the title.

The Tigers round out the midseason rankings in the cellar at #8.  CC is going to have significant difficulties in the second half of the season, as every team in the rest of the league is more talented than the Tigers at this point in time.  CC will look for its underclassmen to mature and grow to perhaps play a spoiler role, but I think it will be difficult for Colorado College to earn more than 10 conference points this season.  That being said, Mike Haviland’s crew play an exciting brand of hockey and have the potential to grow into a contender in years to come.