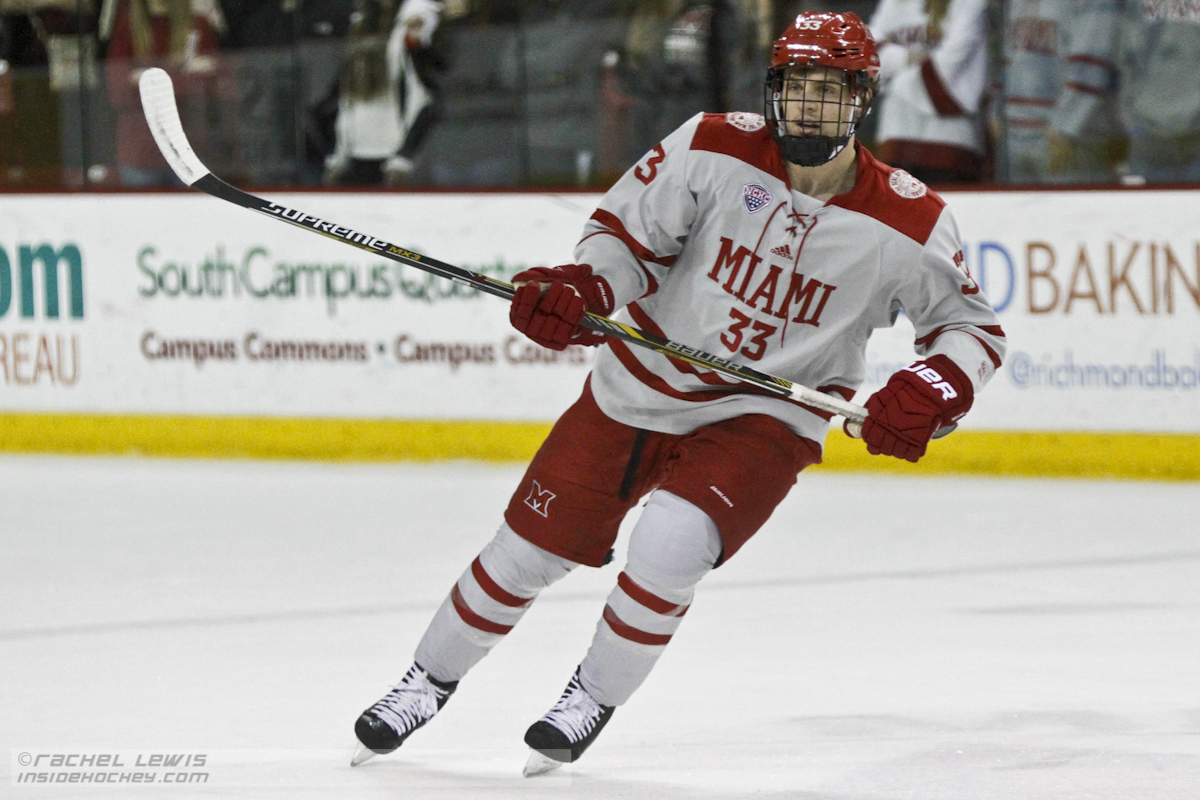 Welcome to the Inside Hockey Power Rankings. Taylor Seibel and I return for another season. Three of us will be doing the weekly NCHC Power Rankings column.

This past weekend, UND swept lowly Lake Superior State University in a two-game non-conference matchup. This weekend, UND travels to Denver to take on their heated rival the University of Denver.

Coming out of the bye week, the Bulldogs remain one of the hottest teams in the country. The Bulldogs have won seven-of-eight games and have series sweeps over the Minnesota Gophers and the St. Cloud State Huskies.

The power rankings are a snap shot of the present, and at the present time the Bulldogs are one of the better teams in the NCHC and the Nation.

The RedHawks have won six-of-eight games. Their only losses in the last eight games are to North Dakota and Omaha.

After having a dismal season last year, the RedHawks have rebounded nicely this season. Four of Miami’s five losses have been against teams in the top-20.

The Mavericks traveled to Oxford, OH, this past weekend and split their weekend series with the RedHawks (2-8 L, 5-2 W).

In their last six games, the Mavericks are 2-3-1. The Mavericks have been outscored 17-19 during that six game stretch.

This past weekend Denver split their weekend series with the Cornell Big Red (1-4 L, 3-1 W). This weekend, Denver plays UND at home.

This past weekend, the St. Cloud State Huskies were idle. So, nothing really changes in the bottom three positions.

Their Huskies schedule doesn’t get any easier, they play Omaha, Quinnipiac and Miami the next three series.

I don’t think the Huskies are as bad as their record and they will make some noise before the season is over.

This past weekend, the Western Michigan Broncos were idle. The Broncos have won one conference games in eight attempts. No change here.

There’s one thing for certain, the Colorado College Tigers are a bad hockey team. As I stated last week, the statistics don’t lie, the Tigers are bad in every statistical category. In seven league games, the Tigers have yet to win a game. The Tigers are ranked 54th nationally in winning percentage.

The Tigers are scoring 2.00 goals per game and are ranked 46th nationally in offense. The Tigers have one of the worst defense in division I college hockey giving up 4.46 goals per game.

For about 30 minutes on Friday, North Dakota looked like they were going to fall prey to the curse of being ranked #1 in the media polls, as they trailed Lake Superior State 4-1.  However, the Sioux used an all-around performance to score the next six goals in the game, and won 7-4.  North Dakota swept the series with a 3-1 victory on Saturday night, and heading into this weekend, UND will likely carry the #1 ranking for at least one more week.  This upcoming weekend will be a critical conference series, as North Dakota travels to the Mile High City to take on the Denver Pioneers in NCHC play.

The Bulldogs swept NCHC foe Colorado College this weekend, and I bumped them up one spot in my rankings.  Minnesota Duluth squeaked by the Tigers 3-2 in overtime on Friday, but responded with a very strong Saturday, crushing CC 7-2.  The sweep, coupled with results elsewhere pushed Minnesota Duluth up into a tie for first place in the conference.  A critical non-conference series awaits UMD, as they travel to Houghton, MI to take on the Michigan Tech Huskies.

The RedHawks looked dominant on Friday night, smoking Nebraska Omaha 8-2.  Another performance like that would have likely vaulted Miami up to the top spot in these rankings, but unfortunately for the RedHawks faithful, the Mavericks responded strong with a 5-2 victory on Saturday.  The split still leaves Miami tied with Duluth atop the conference standings.  The RedHawks are now off until January.

The Mavericks had another difficult weekend, this time having to travel to Ohio to take on Miami.  Dean Blais’ squad responded well after getting trounced on Friday night to salvage a split.  Omaha’s freshmen continue to impress, and if they continue to improve throughout the season, UNO will be an even more difficult team to play come February and March.  The Mavs schedule doesn’t get any easier though next weekend, as Omaha hosts St. Cloud State in conference play.

The Huskies got a brief respite this past weekend, as St. Cloud had the weekend off.  The Huskies are a team capable of making a run and competing for the conference title.  However, they can’t afford to lose too much more ground if they want a shot at repeating as conference champions.  That quest starts next weekend, as the Huskies travel to Omaha to take on a strong Mavericks squad.

The Pioneers traveled to Ithaca, NY to play Cornell in a difficult non-conference series.  While the Pioneers fell on Friday, they responded with a strong, physical performance on Saturday to salvage a series split.  DU may be ranked 6th in my NCHC rankings, but that should not fool anyone, as they are a team capable of winning the league this season.  The Pioneers square off against rival North Dakota this weekend, and it should prove to be a tremendous series of action.

The Broncos were off this past weekend, but Western will look to continue their strong play this upcoming weekend against Colorado College.  Western might be in the bottom two in the conference standings, but the Broncos have shown they are capable of knocking off anyone, and look impressive in doing so.

1. North Dakota
12-3-2 USCHO Rank: 1
North Dakota finished off Lake Superior State this weekend at Ralph Engelstad Arena, although things were looking grim early on Friday night for UND. Freshman Cam Johnson got his first start, but was chased for Zane Gothberg about a minute into the second when the Lakers would go up 3-0, leaving the Ralph quiet. UND would surge back with five goals in the second, making it their first five goal period since the infamous Gopher game in the WCHA Final Five in 2012. UND would gain victory and go on to sweep with a 3-1 victory on Saturday. Good teams win a lot, great teams find ways to win through injury, and whatever in game adversity is thrown in front of them. UND travels to Denver next weekend for one final series to close out the first half of the season

2. UMD
11-5-0 USCHO Rank: 8
The Dogs are a team that have been causing some havoc throughout the NCAA since their sweep of then number one Minnesota about a month ago. Slowly climbing their way up the rankings, they find themselves tied on top of the NCHC standings along side Miami with 21 points. UMD is coming off a sweep against Colorado College at home this weekend and won by an impressive 7-2 advantage on Saturday. Next Weekend, UMD travels to play a very tough Michigan Tech for a battle of USCHO top 10 teams. This is a series every college hockey fan will want to keep an eye on.

3. Miami
11-5-0 USCHO Rank: 6
Well the Red Hawks are where everyone thought they would be last season at this time, and that is on top of the standings. Miami has looked solid all season long and looks to be a Penrose favorite when it gets down to crunch time. This past weekend they had conference play against Nebraska-Omaha, where the teams would split lopsided contests Friday and Saturday. Friday night it was all Miami, winning by an 8-2 advantage, but Saturday Omaha came storming back with a 5-2 victory. The Red Hawks are a team that I still am not quite sold on yet, but they just keep on getting wins. In their last 10 games, they are 7-3-0 with splits coming against Duluth, North Dakota, and most recently this past weekend against Omaha.

4. Denver
9-4-0 USCHO Rank: 11
The Pioneers are on a path to try and defend their Frozen Face-Off title they earned last season and make it back into the NCAA tournament. A team that I thought would be where St. Cloud is right now has become a nice surprise to watch within the NCHC and the NCAA. Denver recently split with Cornell this past weekend, dropping them out of the USCHO top 10. The Pioneers host North Dakota for their last series before the holiday break, in a series that always produces fireworks. Keep an eye here, you may be looking at a future conference tournament match-up.

5. Omaha
8-4-2 USCHO Rank: 12
Omaha is tough to play. They bang bodies and have scoring as well, however Austin Ortega was held scoreless in their series at North Dakota two series ago. After a loss that left them with their tails between their legs on Friday night, UNO came out looking for some revenge. They got that with a 5-2 victory against Miami, but that 8-2 loss is holding them back in the power rankings this week. Good teams don’t allow 8 goals at this point of the season, no matter how bad you are playing.

6. St. Cloud
6-7-1 USCHO Rank: NR
Probably the toughest sub 500 team in the country, the Huskies spent this weekend off to recoup and get to 100% before traveling to Omaha for one final series before the holiday break, looking to get above the 500 mark. Holding wins against Union, although they are struggling thus far this season, Minnesota, going through a slump of sorts themselves, and North Dakota, now number one in the country, St. Cloud could argue that they had one of the toughest first half schedules of anyone in the country. This is a team I’d keep an eye on in the second half. They could play spoilers to someone before it’s all said and done.

7. Western Michigan
5-8-1 USCHO Rank: NR
Not much can be said about the Broncos right now, other than this is right where I’d thought they would be at this point of the season. Andy Murray has this team competitive, but seems to not quite have what it takes to finish the job in big time situations. With a win over Denver, a tie against St. Cloud, and an impressive 8-2 demolition of Union in their last game two weeks ago, Western Michigan proved that even though they probably will be a sub 500 team all season, you still can’t take them lightly, and if you do, they will pounce all over you.

8. Colorado College
3-10-0 USCHO Rank: NR
CC has just been anything but good this season. The Tigers are looking for their first conference victory and have been outscored 36-9 in NCHC play this season, giving up 10 against UND and UMD, eight against Miami, and eight in a one game showdown against Denver. The one bright spot for Colorado College right now is that they have one more weekend of play before they can sit back, and try and regroup before the second half of the season starts. A lot of work is needed to be done here, and fast, or their season will end with fans, players, and coaches with a very sick feeling in their stomachs.