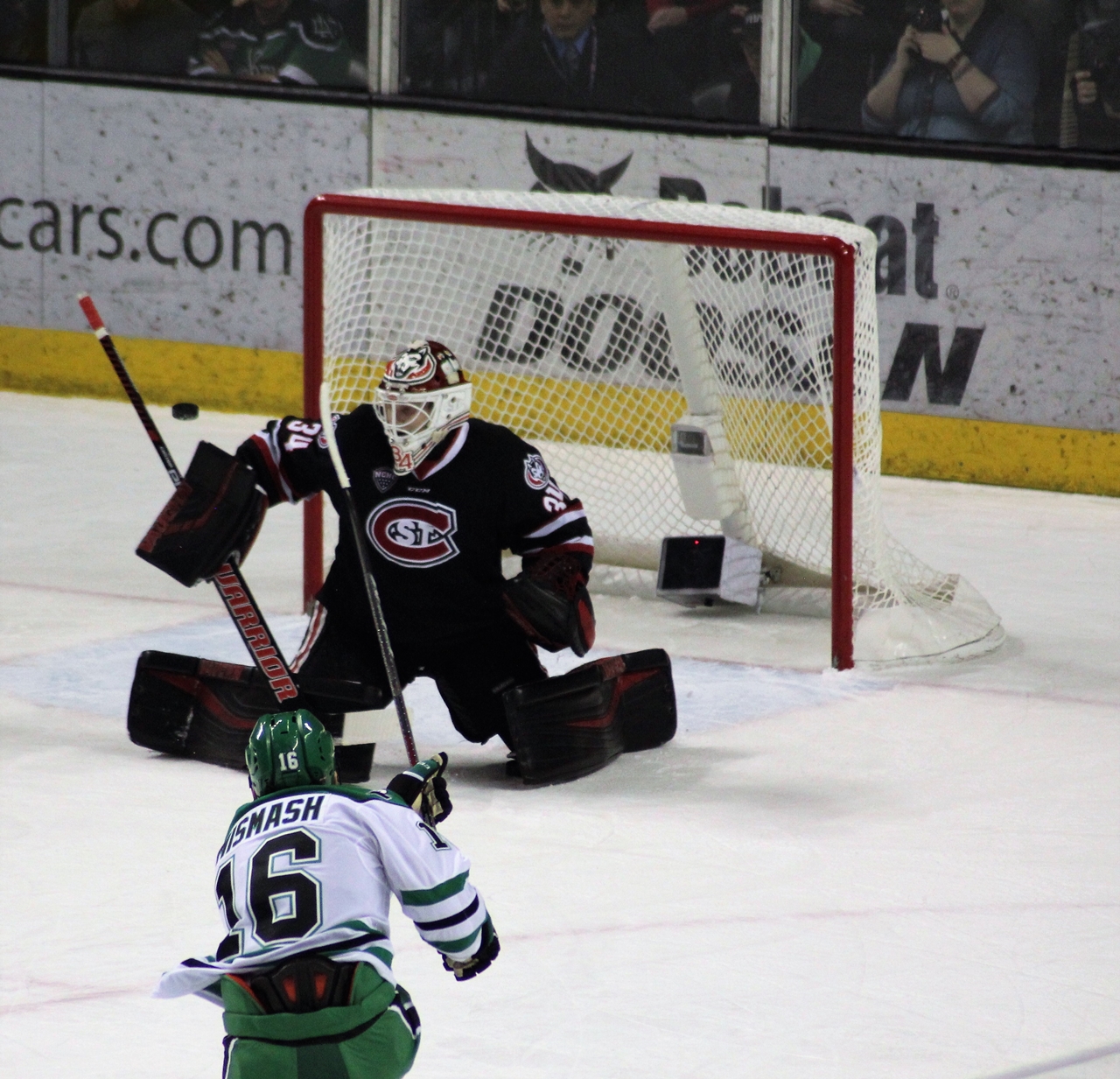 After an amazing regular season that has been highlighted by the likes of offensive defensemen leading a large number of teams in points, seen the usual powerhouses struggling and lesser accomplished schools rising to the top of the heap it’s time for the top 16 teams to put everything on the line for the National Championship. With a trip to the Frozen Four in Buffalo, New York on the line here’s what this weekend’s regional action has in store. First, a look at the games at Scheels Arena in Fargo, North Dakota.

St. Cloud St. (30-5-3) – The Huskies have been top dog in the NCAA’s for most of the season. First-year Head Coach Brett Larsen has his team in position to make a run to the program’s first NCAA title. The roster is stocked with talent at every position, and the team has depth and can roll four solid lines. Led by Hobey Baker Top 10 Finalist Patrick Newell (Sr), Blake Lizotte (So), and Robby Jackson (Sr), all three with point totals in the 40’s, St. Cloud keeps coming at opponents. And it’s not just the offense that can score, as Jimmy Schuldt (Sr) and Jack Ahcan (Jr) have 34 and 31 points respectively. Schuldt is a contender for the Hobey Baker as well. Teams still have to deal with Ryan Poehling (Jr), Easton Brodzinski (So) and Sam Hentges (Fr) to name but a few. The biggest question for the Huskies is in goal. David Hrenak has been the workhorse for St. Cloud and his numbers are just so-so, 2.186 Goals Against Average and .908 Save Percentage. While that might be a product of quality faced in the NCHC weekly, the second round opponent is fellow NCHC team Denver or high-powered Ohio St. The Huskies were in this position last season and lost to Atlantic Hockey’s champ Air Force in the opening round.

American International  (22-16-1) – The Yellow Jackets were at the top of Atlantic Hockey for a majority of the season. Coach Eric Lang has built a quality program in just a few years. The team truly has an international flavor, with players from Sweden, Ukraine, Czech Republic, Slovakia, Norway, and Slovenia, as well as Canada and the US. They are a big, heavy team, that can play the physical game with anyone. The team does lack speed overall. Blake Christenson (Jr) led the Yellow Jackets with 46 points, while Kyle Stephan (Jr), Martin Mehlberg (Jr), Tobias Fladeby (So) and Shawn MacBride (Sr) added to the offensive punch. The defense is led by Brennan Kapcheck (So), Patrick Demel (Jr), and Ryan Polin (Sr). The crease is patrolled by Zackarias Skog (Jr) who comes into the tournament with a 2.75 GAA and a .896 Save %.

This one should be relatively easy for the Huskies. As great as a story AIC has been this year they just can’t keep up with St. Cloud. Too fast, too much talent, and just far superior. Prediction – St. Cloud St.

Denver (22-11-5) – The Pioneers season was slightly better than expected under first-year Head Coach David Carle. Denver, despite losing coach Jim Montgomery and stars Henrik Borgstrom, Troy Terry, and Dylan Gambrell to the NHL and others to graduation. Carle still had a plethora of talent on his roster like 2017-18 Finals hero Jarid Lukosevicius (Sr) Liam Finlay (Jr), Michael Davies (Jr) and Erich Fear (Sr). Plus a solid freshman crop that has been an immense boost to the Pioneers attack. Emilio Pettersen, Cole Guttman, Brett Stapley, Tyler Ward, and Slava Demin have contributed right away. The Pios did lose goalie Tanner Jaillet to graduation but have seen the tandem of Devin Cooley (So) and Filip Larsson (Fr) split time this season to provide the keeping that Denver has been accustomed to. Each has 11 wins while Cooley has a 1.84 GAA and .934 Save %, Larsson has 2.07 GAA and .929 Save %. This team can win its second title in three years.

Ohio State (20-10-5) – The Buckeyes won the Big Ten regular-season title by a good margin over closest rival Notre Dame, but stumbled in the conference semifinals at home to Penn St. Coach Steve Rohlik has a solid squad that is led by the offensive prowess of Mason Jobst (Sr), Tanner Lazynski (Jr), and Dakota Joshua (Sr). While the Buckeyes have slumped a bit as of late they have the experience needed to compete in the tourney. Last year’s squad lost to eventual Champion Minnesota-Duluth in the Frozen Four semifinals. Like their counterpart in Denver, this team knows what it takes to make it to the next stage. Forwards Carson Meyer (Jr), Ronnie Hein (Jr), Freddy Gerard (Sr) and John Wiitala (Sr) need to step up more after having great seasons. On defense Matt Miller (Jr), Wyatt Ege (Sr), Sasha Larocque (Sr), Jordi Meyer (Jr), and Tommy Parran (Sr) are as good as they come. The Ohio St goalie tandem of Tommy Nappier (So) and Sean Romeo (Sr) has been the team’s bugaboo. The two have mostly split the games on a weekly basis, Nappier has better numbers, Romeo the experience.

This is a solid matchup between two very good teams. As potent as the Buckeye offense can be it hasn’t been clicking as of late and the Pioneers are just too good to sputter against. Prediction – Denver