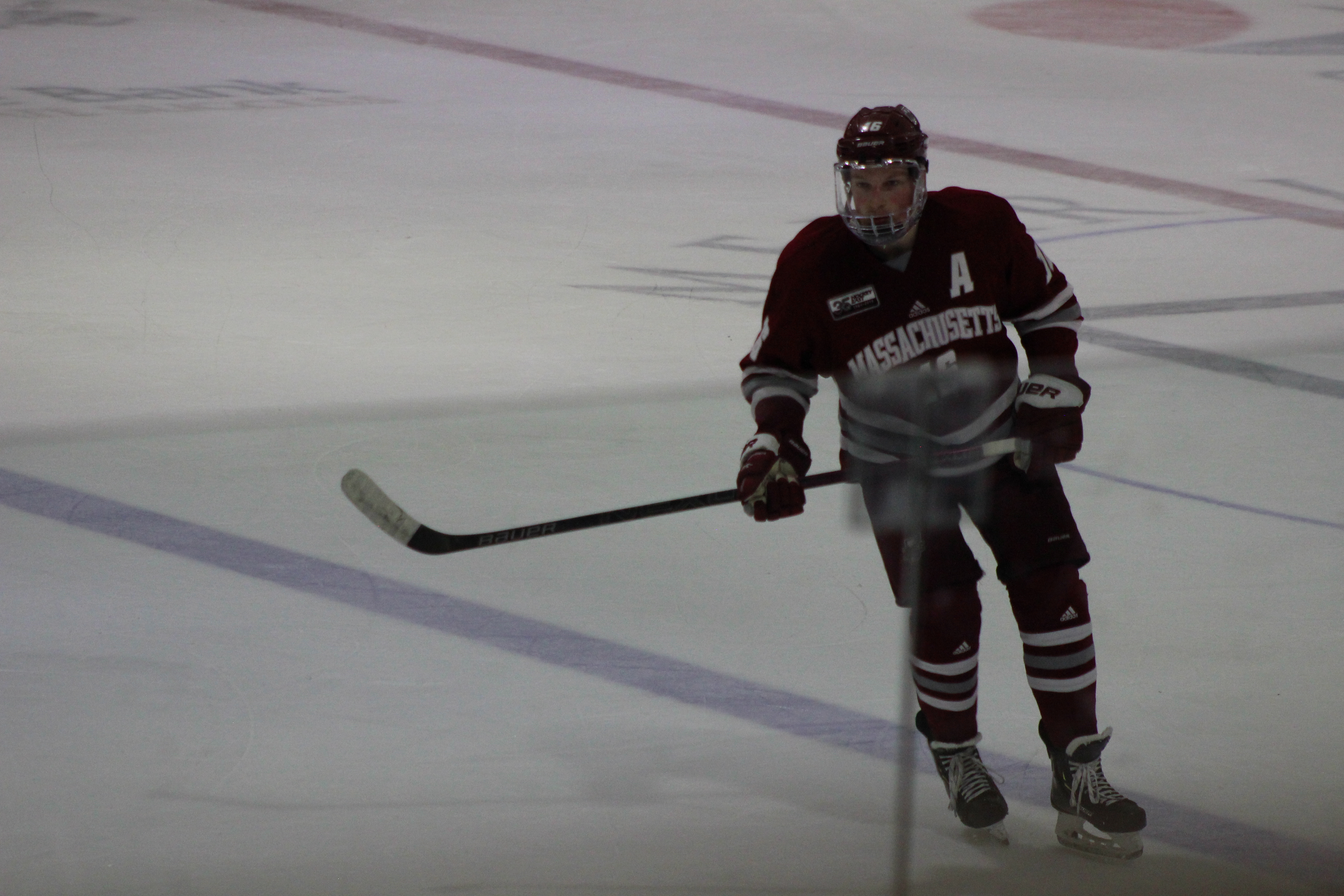 After an amazing regular season that has been highlighted by the likes of offensive defensemen leading a large number of teams in points, seen the usual powerhouses struggling and lesser accomplished schools rising to the top of the heap it’s time for the top 16 teams to put everything on the line for the National Championship. With a trip to the Frozen Four in Buffalo, New York on the line here’s what this weekend’s regional action has in store. Manchester has hosted NCAA Regional Tournaments since 2004 and has been a bi-annual host since 2007. SNHU Arena has seen its share of tournament chaos from UNH’s last-second comeback against North Dakota in 2009 to Notre Dame’s shocking upsets of Minnesota and Lowell in 2017. Let’s preview the four teams and the action.

Massachusetts (28-9-0) – The Minutemen were one of the nation’s best teams from start to finish, but have slumped over the last month. It’s been a historic season for the Minutemen, first #1 ranking, first Hockey East regular-season title, most wins in a season, and the first time being a top seed in the NCAA tournament. Third-year Coach Greg Carvel’s team is well balanced with a high-powered offense and solid defense. The offense starts in the back end with Hobey Baker favorite Cale Makar (So) but also has Mario Ferraro (So), Ty Farmer (Fr), and Marc Del Gaizo (Fr). Plus bruisers Colin Felix (Fr) and Jake McLaughlin (Jr). The offense has been timely too. Getting production from all four lines. Jacob Pritchard (Sr) a graduate transfer has been immense this year for the UMass, adding points as well as leadership. The solid sophomore class also consists of Mitchell Chaffee, John Leonard, Jake Gaudet, Philip Lagunov, and Oliver Chau. Plus Bobby Trivigno (Fr), Brett Boeing (Sr), and Niko Hildenbrand (Jr). The goaltending has been solid all year with Matt Murray (So) and Filip Lindberg (Fr). Murray has carried much of the work but has come back to earth as of late. Lindberg, a World Junior Gold Medalist with Team Finland, is no slouch so the position should be in good hands either way.

Harvard (19-10-3) – The Crimson have had an up and down year but barely missed out on splitting the regular season title. They did continue their streak of reaching the ECAC semifinals for the fifth straight year, only to lose 5-2 to eventual champ Clarkson. Coach Ted Donato has a team that is powered from the defense out. Adam Fox (Jr) leads the nation in assists (39) and is third overall in points (48) but has the most of any player remaining in the tourney. Fox also averages 1.5 points a game which is 1st overall. Also, Reilly Walsh (So), John Marino (Jr), and Jack Rathbone (Fr) round out the Crimson’s crop of puck moving defensemen. Adam Baughman (Sr) and Jacob Olson (Sr) provide the muscle on the blueline. The offense includes Lewis Zerter-Gossage (Sr), Michael Floodstrand (Sr), Jack Badini (So), Henry Bowlby (So), Frederic Gregoire (Jr),  and Colton Kerfoot (Jr), all point producers. Plus ECAC Freshman of the Year Casey Dornbach and classmate Jack Drury. The Crimson’s biggest concern all season has been in goal. Michael Lackey (Sr) carried the squad until he was injured last month. Back-up Cameron Gornet (Jr) filled in admirably for Lackey over the final weeks. Donato switched back to Lackey in last weeks loss to Clarkson.

This game features the two best defensemen in the NCAAs, it will be well worth the price of admission to watch them battle head to head. The Crimson can certainly win this game but it will take a mercurial effort in goal from either Lackey or Gornet. It’s a match-up of the nation’s two best power play units as well so whenever there’s a penalty grab some popcorn. Prediction – Massachusetts

Clarkson (26-10-2)  – The Golden Knights are fresh off winning the ECAC tournament. Coach Casey Jones squad has been here before and is well balanced enough to make a deep run. Clarkson boasts one of the nation’s best goalies in Jake Keilly. The defense is stout and solid led by Aaron Thow (Sr), Greg Moro (Jr), Connor McCarthy (So), and Jordan Schneider. The production on offense comes from Hobey Baker candidate Nico Sturm (Jr), Haralds Egle (Jr), Devin Brosseau (Jr), Jack Jacome (So), and Josh Dunne (Fr). As well as from Moro and Thow. The Golden Knights also have quality freshman that have stepped right in beside Dunne in Anthony Callin, Chris Klack, and Nick Campoli. As in the trend in the Northeast Regional the defense predicates the offense for Clarkson.

Notre Dame (22-13-3) – The Fighting Irish are also coming in as Big Ten Conference Tournament Champions. Jeff Jackson’s squad knows what it takes to make the Frozen Four, having made the last two, including losing 2-1 in last year’s final against Minnesota-Duluth. Coach Jackson’s squad also has what it takes to get back there. The Irish are led by seniors Bobby Nardella and Dylan Malmquist. A strong supporting cast of Cal Burke (Jr), Michael Graham (Fr), Mike O’Leary (Jr), Cam Morrison (Jr), and Joe Wegworth (Sr) have a knack for getting the job done when needed. On defense Andrew Peeke (Sr) is a wrecking ball, Matt Hellickson (So ) and Tory Dello (Jr) are solid two way players. In goal Cale Morris (Jr) has been the go-to guy for Notre Dame. He’s one of the better goalies in the regional, and lucky for the Irish back-up Dylan St. Cyr is equally as talented, if not as tested.

Very similar teams in this one. Solid from the net out, quality defense, timely scoring, and excellent coaching. Each team has the knack of capitalizing on opponent’s mistakes. Friday in Manchester should be fun! Prediction – Notre Dame