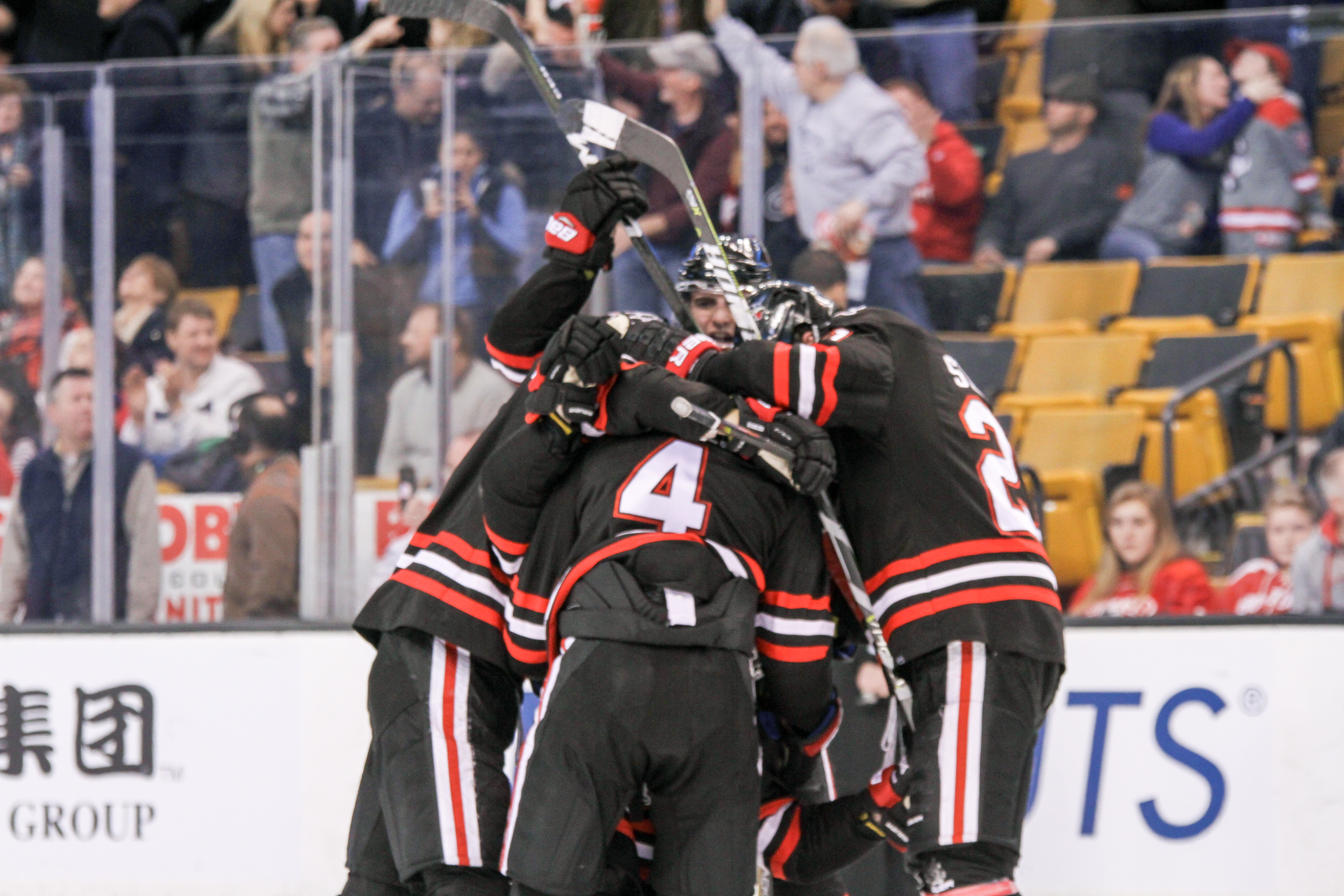 Northeastern celebrates after scoring a goal in the 3rd period.

The Dunkin Donuts Center, previously called the Providence Civic Center, is a staple building of College Hockey’s history. The initial Hockey East Tournaments and six Frozen Fours were held in Rhode Island’s capital. The site has become a regular Regional site since the Tournament expanded to 16 teams. This weekend, the Ocean State hosts four teams eager for a chance at the Frozen Four. Let’s preview the teams and the games.

Mankato has enjoyed a magnificent season. They won the WCHA Regular Season Championship in convincing fashion and narrowly edged Bowling Green in a thrilling comeback effort. They enter Providence in a familiar position: a Number One seed. They were upset as the top seed in 2015 by RIT and were toppled in overtime last March by Minnesota-Duluth. Mankato transitioned perfectly to set a program record for wins. Freshman Dryden MacKay has led the way in net with a top-ten save percentage (.931) and the second-best GAA (1.66). In front of him, Connor Mackey (So.) and Ian Scheid (Jr.) lead the nation’s best defensive unit. The forwards also lead a top-five offense. Juniors Mark Michaelis, Parker Tuomie, and Charlie Gerard and Sophomore Jared Spooner all finished top-fifteen in the WCHA for scoring. This team is primed for a run at their first Frozen Four.

Providence rode a curious season. They entered the year as a favorite atop Hockey East, struggled in October, corrected course in February, and slipped against Boston College in the Conference Quarterfinal Round. They waited until Saturday night for Northeastern to defeat the Eagles before their tournament spot was clinched. They get as close to home ice as anyone can have in the NCAA Tournament: 3.1 miles across town. While the team has a fan advantage, they have to actually play the game and they’ll be a tough out. Senior Hayden Hawkey is the program record holder for wins and shutouts in net. He was up and down all year but has game-stealing potential. In front of him, the Friars offer the nation’s fifth-best defensive unit. Jacob Bryson, Ben Mirageas, and Vincent Desharnais are all tough and physical players who can move the puck well. It’s a versatile blue line that can match with any in the nation. The offense also boasts some force. Freshman Tyce Thompson and Jack Dugan integrated well with established Friars Josh Wilkins, Brandon Duhaime, Vimal Sukumaran, and Scott Conway for a top-13 offense in the nation.

The home-ice advantage doesn’t cut enough for Providence to help them overcome a fabulously constructed team from Mankato and one committed to overcoming past program disappointments.

Northeastern has enjoyed an unexpected dream season. The Huskies lost the nation’s top line to the NHL after last season. Dylan Sikura, Nolan Stevens, and Adam Gaudette led NU to the first Beanpot in 30 years and their departure was expected to hamper the Huskies. Instead, Jim Madigan’s squad regrouped and set a program record for wins. They did so behind the nation’s hottest goaltender, sophomore Cayden Primeau, who won the Hockey East’s MVP for the conference tournament. In front of him, Jeremy Davies proved his All-American honor from the prior year with a career season, leading his team in assists (27) and points (35). Jordan Harris (Fr.) and Eric Williams (Captain, Sr.) fill out the physicality on the NU blue line and can get shots to the net effectively. This team finished sixth nationally for defensive performance. Offensively, NU finished the regular season a top-20 team; much lower than the prior season, but more balanced among the lines. Freshman Tyler Madden melded well with older performers like Brandon Hawkins, Liam Pecararo, and Grant Jozefek. Zach Solow also set a program record for game-winning goals (7).

Cornell has been a frustrating team all season. The Big Red battled injuries all season to reach the ECAC Championship game and stumbled at the end to fall to Clarkson. Matt Galajda and Austin McGrath split time in the nets this season, mostly due to Galajda’s injury troubles. Galajda left the game due to an injury. As is, his status is unclear for Saturday. In front of the concerning goaltending situation, Cornell played to their identity of a defensive force. They tied Northeastern and Minnesota-Duluth for the sixth best goals against average nationally (2.00). Yanni Kaldis, Alec McCrea, and Matt Nuttle anchor a forceful blue line. Mike Schafer’s offense, however, does leave something to be desired. Morgan Barron, Mitch Vanderlaan, and Tristan Mullin have scoring potential, but the Big Red only have the 22nd best offense in the nation. Only one team, Notre Dame, has a lower goal scoring output.

Prediction: Northeastern is clicking at a higher rate and has stability in net. Cornell, while a good defensive unit, does not have the offense to keep up with the Hockey East Champions.

Hypothetical winner: Northeastern. The Huskies are performing at a high level offensively and Cayden Primeau is possibly the hottest goaltender in the nation going into the NCAA Tournament.