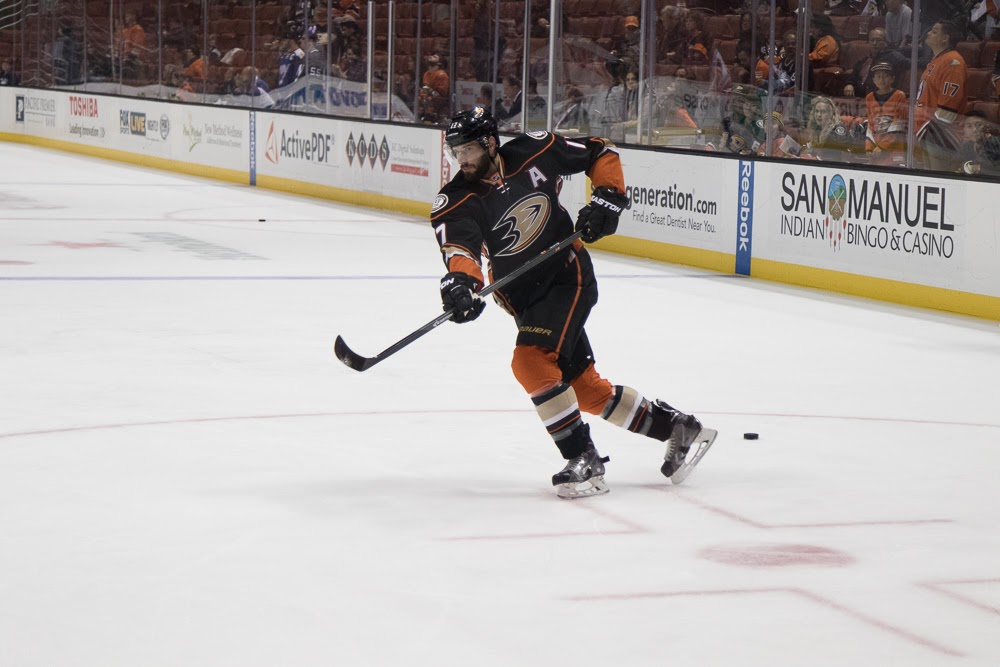 The Ducks should have been the rested, and thus faster, team Sunday night with LA in town. Empirically, they’re the faster team anyway, but man, they didn’t look it aginst the Kings. The LA team, by the way, had played just 28 hours earlier, with New Jersey in for an afternoon tilt on Saturday.

They’d won that game, putting their record even at 9-9-1 and 19 points to the Ducks’ 9-6-3 and 21 points (with one game in hand). Maybe that’s why they decided they had to come out hard. Whatever the case, they roared out of the gate, outshooting the Ducks 9-5 in period one and 17-8 in period two. The first frame netted neither team a goal, but by the end of the second, it was 3-0 Kings on two power play markers.

In terms of personnel, the Ducks had come in with Clayton Stoner out for a second game. Bieksa had been sick and thought perhaps not able to play, but he did. The LA team was still missing Kopitar after some hope had been raised after Saturday’s game that he might be available. He ought to be back for their Wednesday contest at home.

Other than those and a couple of other, minor, changes, nothing was up lineup-wise with the two teams. The Kings were still using Nolan on the third line with Shore and King, and the Ducks had youngster Ondrej Kase in for the injured Joseph Cramarossa, who was hurt in a collision with Rickard Rakell on Thursday night against New Jersey. Kase was in his third NHL game, and the man he was replacing had been in 13 to date, all this year.

What gave? Desire. The Ducks had been resting since playing Thursday, and so should have had some mojo on their side, but they sat on pucks, turned them over, got no streaky passing going; in short, they played right into the hands of a team that wanted them to fail at their characteristic speed game.

But there’s something else you have to know: whether by design or not, the Kings are a much swifter team this year than in the past. Perhaps this is due to the Carter line, and Carter himself in shorthanded situations, skating like the wind. By the end of two periods, he had assisted on the team’s first goal and scored its second and third, both on the power play, to make the score that 3-0 already mentioned. Admittedly, the second of his goals was a bit lucky, coming off a Doughty shot that hit someone in front and then bounced up and into Carter’s body and from there, down into the net. He might have gotten a stick on it. But he was where he needed to be—moving towards the front of the net—regardless.

Carter had said Saturday the mostly clichéd things—the team needed to be good against the Ducks, etc. But it might have taken them by surprise how easy the going was. Even in the third, when the LA team might have been thought to be tiring, they held on. The Ducks managed two goals in the last frame, and they outshot the Kings 17-3 in the period. The second of their goals was on the power play, and they had another chance where a point shot beat Budaj cleanly and looked like it was in but hit the post.

In the locker room after the win, Carter was happy, but didn’t want to say much about his 600th point. He did comment that he would just move on towards 700 now. He also said that, “We always know what the games are like when we play these guys. At home there they took it to us pretty good.” He was referring to their first meeting of the year, at Staples, a 4-0 Kings loss.

The Ducks also had a power play to finish the game, and on that they got three shots. But if they had tied the game, it would have been a result against what is fair. Indeed, their coach said afterwards, “I like that we had a response, but I didn’t like our first two periods. We didn’t play anywhere near what we were capable of, and they came in and outplayed us for two periods. They got the two points. If you’re not prepared to play sixty minutes, you’re not going to have success.”

On the other quarter, Sutter said, “Division games are tough. It’s a tough division, and our travel hasn’t been easy. You just try to stick together in the room and soldier on. I thought the building had a lot of energy. Usually when you play the night before, you’re gonna come out like you finished the night before, and that’s what we did. But you also know at some point that the tank’s going to start getting down. The needle’s going to go the other way.”

Doughty said, “They basically just dominated the third. We were in our own zone a lot. Long shifts, and that made us tired. When you’re tired, you can’t do things to the best of your ability.”

Carlyle also mentioned, “We didn’t have any response, any emotion, Pucks were going through our sticks. No tape-to-tape pass, and we didn’t get involved physically until the third period. When you don’t string together two passes, you’re flubbing the puck around . . . The execution wasn’t anywhere near where we needed it to be.”

The Ducks now play Tuesday night against the Islanders. The Kings have the Isles in on Wednesday.

Carter said, “We have had a pretty tough schedule. This is the last game of our stretch here, and it was a good character win. Guys really dug in. They made it interesting at the end, but two points is two points.”

Doughty reprised that, saying, “We knew we had a little break after this game, so basically we weren’t going to leave anything in the tank, just blow it all out there and play our hearts out.”

This marks my 500th game writing as a credentialed NHL reporter. Thanks, Kevin Greenstein, for giving me the chance.