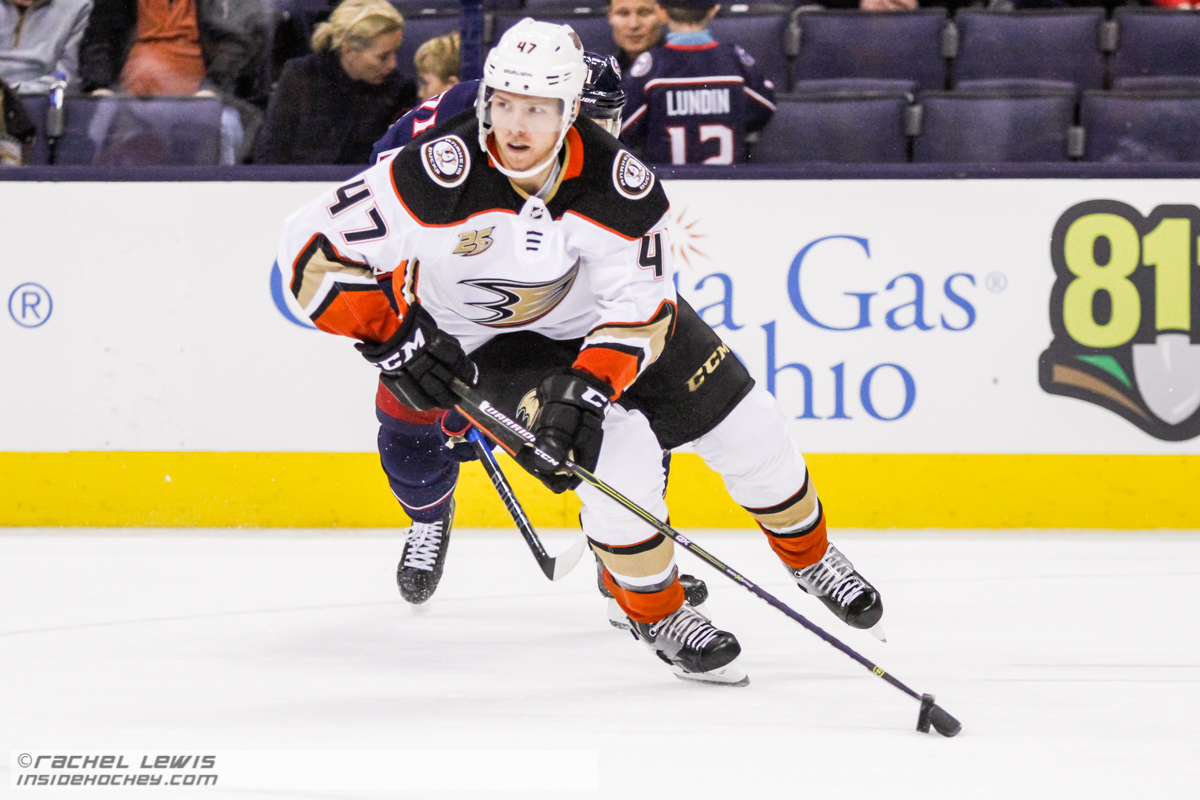 Hampus Lindholm (ANA - 47) skates the puck through the Ducks zone.

The Anaheim Ducks love to make things exciting. Take for example Wednesday  night in Anaheim  with Vegas in town. They kept the pace even and the score 0-0 through one period. Then they exploded in the second, scoring four  goals while allowing one, to appear to be able to get out of the frame at 4-1.

But lurking out there was this little thing called the “last minute of play in the second period,” and the Ducks used that time to launch a beautiful scoring chance by Trevor Zegras, which was stopped, and then to allow a goal. Shorthanded. With 12 seconds on the clock. The Zegras chance was a beauty, taking the puck through center and across the crease for a backhand that Robin Lehner saved.

The goal was a bang-bang play with a pass out from behind the net and a slam of the puck past Anthony Stolarz by Zach Whitecloud.

Visions of the prior night must have danced in their heads over the period break. Against LA, they had been up 4-1 also, and ended up  allowing the  Kings to tie the game on three late goals. The game went into OT, then a shootout. At least the Ducks could say they  won it.

Against Vegas, they did another mini-collapse when, at 1:58 of the third, the Golden Knights scored their third goal, like the prior one, shorthanded. Two shorties in a row. On this one, Janmark grabbed  a turnover from Zegras and went straight in on goal. He waited, feinted, and shot the puck straight past Stolarz.

Zegras. Mistakes. But spectacular plays, too. His production on the night yielded three assists but just a plus-two rating. No play was more spectacular than when he rushed the net around halfway through the third period, put his stick back between his legs, and shot from between his feet, from behind. Lehner concealed his surprise and got a glove on it.

Of note for the Ducks, Ryan Getzlaf did not play.  Tuesday, he left the game in period one with just a couple of minutes time on ice and did not return. He had put an awkward edge down on a skate and appeared to twist his knee. The team has said he’s day-to-day and that they will have an announcement Thursday.

In his place, Sam Steel was ready to seize a chance to play  with Adam Henrique and Troy Terry. Steel was visible many times, and he registered one assist. But nobody was more visible than Zegras, with the complement of Sonny Milano and Rickard Rakell. They’ve got chemistry, and they—at least, those of whom have names beginning with “Z”—are not afraid to take risks.

The best play of the night was from  that line, but not Zegras’s doing. Rather, the big moment was Milano’s assist on Jamie Drysdale’s goal, the Anaheim fifth. MIlano rushed the puck down the left side and somehow, with superhuman vision, spotted Drysdale coming behind him and way  back to his right. Milano put the puck backwards at full speed and allowed Drysdale to fling it into the net to the far side with Lehner sprawling out to try  to make the save.

Drysdale described it after: “I don’t know how in the world he got that puck to me. I was just skating. I wasn’t really expecting to get it. I  was just putting myself in a position where I felt I was open. Sonny’s a heck of a playmaker. His vision is off the charts, so it was an unbelievable play by him. I just tried to shoot it, and it went in. A really good play by him.”

The game became a one-goal affair when Max  Pacioretty, on the PP, fired a wrister and had a bit of a screen. Stolarz got over, kinda, and waved a glove at the puck. That made it 5-4, shots even at 33 each. More than eight minutes to go. Plenty of time.

And each team scored yet once more. The Ducks first got one, an empty-net goal by Isac Lundestrom that he had to fight off a checker to score. At the time, it looked like insurance. It would end up being the  game winner. This because with 28.1 seconds on the  clock the Golden Knights got another PPG. It was a slapper from the point with two guys in front waving sticks. Reilly  Smith got a touch on the puck to record the goal. The shot-taker was Pietrangelo.

Of course, Vegas pressed in the dying time, but there was no need for a bailout save from Stolarz. He had already  done enough.

The Ducks won despite having a horrible night in the faceoff circle. The Golden Knights were 62% in that category, and several of their goals were the result of faceoff wins.

In the scoring category, Janmark and Pacioretty had two-point nights for the Vegas side. Over in Anaheim’s room, Milano and Zegras each had three assists. No player from either team scored more than one goal. In the nets, Stolarz stopped 34 of 39 shots. Lehner got 28 of 33. For Stolarz, who doesn’t play often, this was three wins in a row.

The three goals scored from the  Anaheim defense make 19  from the backliners for the year. Last year it was 17 all year, albeit in 56 games.

The Ducks stay at home for Calgary on Friday evening. The Golden Knights play in Arizona the same night.

Brian Kennedy is a member of the Professional Hockey Writers Association