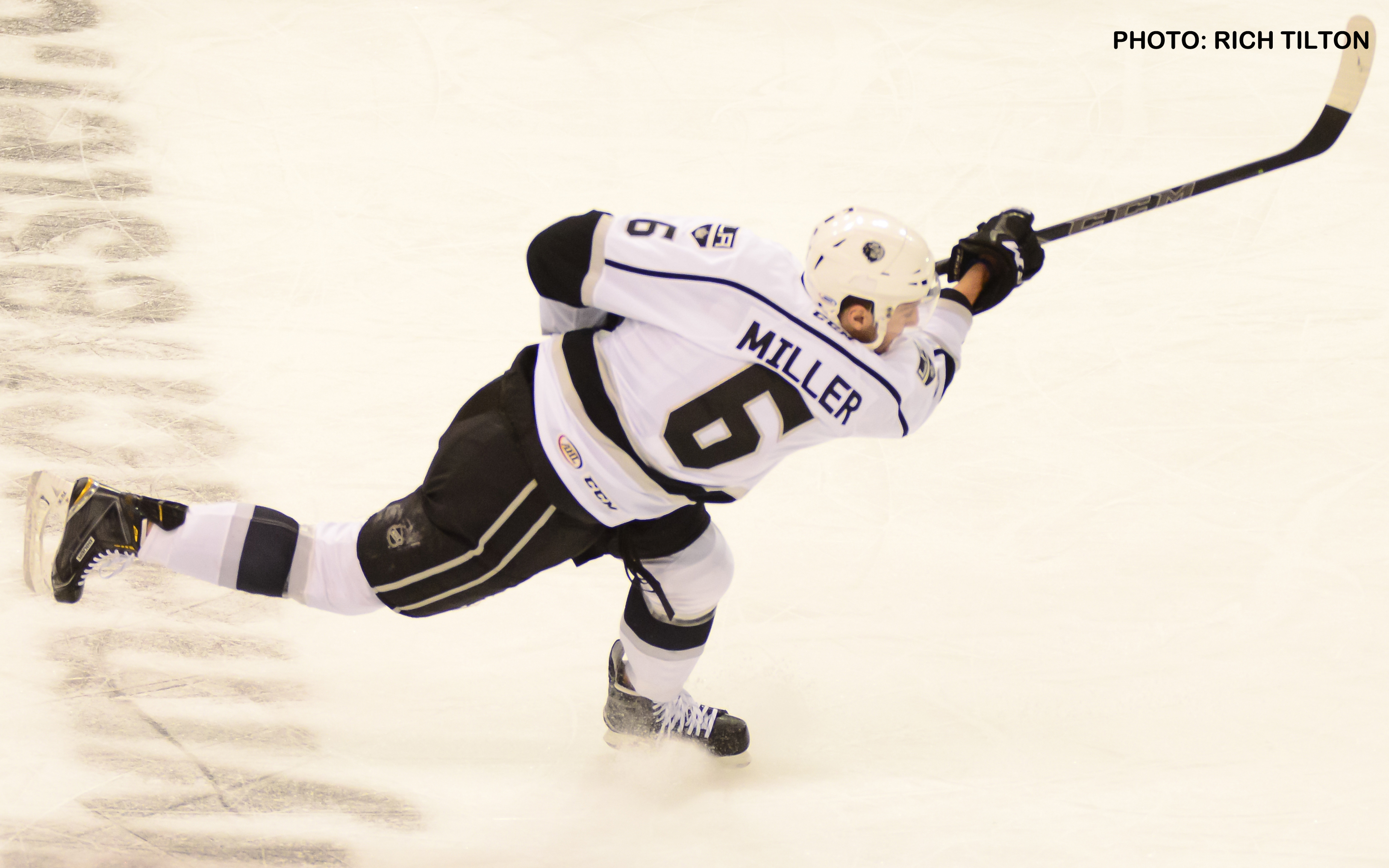 Monarchs Redeem Themselves in OT Win

Colleen Sears
AHL
February 22, 2015 5
For the second night in a row the Manchester Monarchs allowed themselves to fall behind by two goals against the St. John’s IceCaps this past Saturday night.  However, this time the Monarchs refused to let the outcome of the game be the same as the previous night.  A pair of goals from Monarchs’ Colin Miller led the team to a well-deserved victory in OT.
“It was almost the same game [because] we had to come from behind again,” head coach Mike Stothers said.  “I thought it was a great game [with] two good teams, two real good teams.”
Various line changes were made along with reformed plays and players’ mindsets as the Monarchs came out seeking redemption after their loss from the night before.  From the very first face-off the Monarchs played more like the number one team in the Eastern Conference and less like a team struggling to get control of the puck.  Despite allowing the IceCaps to score first, the Monarchs played tough defense as they adapted their play based on mistakes they had made the previous game.
Defensively, the Monarchs played smart by having only one player step to the puck while the others stayed tight around the goal, marking space rather than bodies.  On defense the Monarchs kept one player centered in front of their goaltender, Patrik Bartosak, to help cleanup any loose pucks or rebounds.  During Friday night’s game, the IceCaps capitalized on the Monarchs mistakes by taking advantage of their lack of control of the rebounds.  This resulted in additional scoring opportunities for the Icecaps and eventually led to their OT win.
The IceCaps opened the scoring at 3:37 in the first after Monarchs’ Justin Auger received a penalty for high-sticking.  The IceCaps’ power-play goal was scored by Eric O’Dell after receiving a diagonal pass from teammate John Albert.  The Monarchs increased their momentum after the goal by giving all of their strength into every single play they made starting on defense and translating to offense down ice.  However they were unable to find the back of the net in the first period.
As the second period began to unfold, the Monarchs started using more physical play to push the IceCaps off of the puck, forcing them to surrender possession.  Both the Monarchs and the IceCaps worked in offensive surges as they took turns possessing the puck on offense.  When the Monarchs had possession, the IceCaps would flock the puck in order to force the Monarchs to make a play quick while also limiting their space to handle the puck.
At 10:04, the IceCaps doubled their lead after Scott Kosmachuk dangled the puck past Bartosak and into the back of the Monarchs’ net.  The IceCaps took advantage of the Monarchs’ defenders getting caught watching Jeff Schultz plant a giant hit on one of the IceCaps’ players.  By allowing themselves to lose focus on the play, the Monarchs left the crease open for Kosmachuk to score with help from teammates JC Lipon and O’Dell.
Just a few minutes later, the Monarchs finally cut the IceCaps’ lead in half after David Van der Gulik found the back of the net.  Schultz set the play in motion by sending the puck across ice to Andrew Bodnarchuk who wasted no time before sending the puck diagonally to Van der Gulik who was ready to slap a one-timer into the back of the net.  The remainder of the second period continued to be very back-and-forth between the two battling teams, but neither team was able to light the lamp.
At 10:10 in the third period, the Monarchs’ Colin Miller earned his first point of the night after scoring a power-play goal off a rocket from the top.  Brian O’Neil and Bodnarchuk both tallied a point for their assist on the equalizer goal.
As the teams battled to maintain possession and create offensive opportunities, the Monarchs continued to progress as their determination to win grew along with the bad blood between the two teams.  Both teams exchanged several hits after the whistle throughout the game, which the referees made sure to break up right away in order to prevent a fight.
After a scrum in front of the Monarchs’ goal, Bartosak left the game late in the third due to injury.  Jean-Francois Berube took his place for the remaining time of the game.  The Monarchs continued to maintain their strong level of play as Berube stepped into the game and joined his teammates as they fought for the win.
For the second night in the row the game was sent into a grueling seven minute overtime which would decide the outcome of the game.  At 2:54, the Monarchs’ Jordan Weal suffered a double minor penalty for high-sticking, which allowed the IceCaps to have the man advantage for four minutes.  However, the IceCaps evened the playing field after O’Dell received a minor penalty for interference.  With less than 30 seconds left on the clock, the Monarchs put an end to the long drawn out overtime.  Andrew Crescenzi sent the puck to Colin Miller who patiently worked the puck towards goal and ripped one over the shoulder of IceCaps netminder, Connor Hellebuyck.
“We needed [two points] after dropping one last night,” Miller shared. “I think it was a good push after going down 1-0.  I think [what helped us was] just staying consistent and trying to not really change anything, but just being confident that we can come back.”
The Monarchs were able to regain their confidence after the late OT goal from Miller in the demanding match-up against the Icecaps.  The Monarchs return to the ice Sunday afternoon for a 3pm puck-drop against the Worcester Sharks.  Looking forward, the Monarchs hope to keep their momentum flowing as they take on the Sharks tomorrow at the Verizon Wireless Arena.