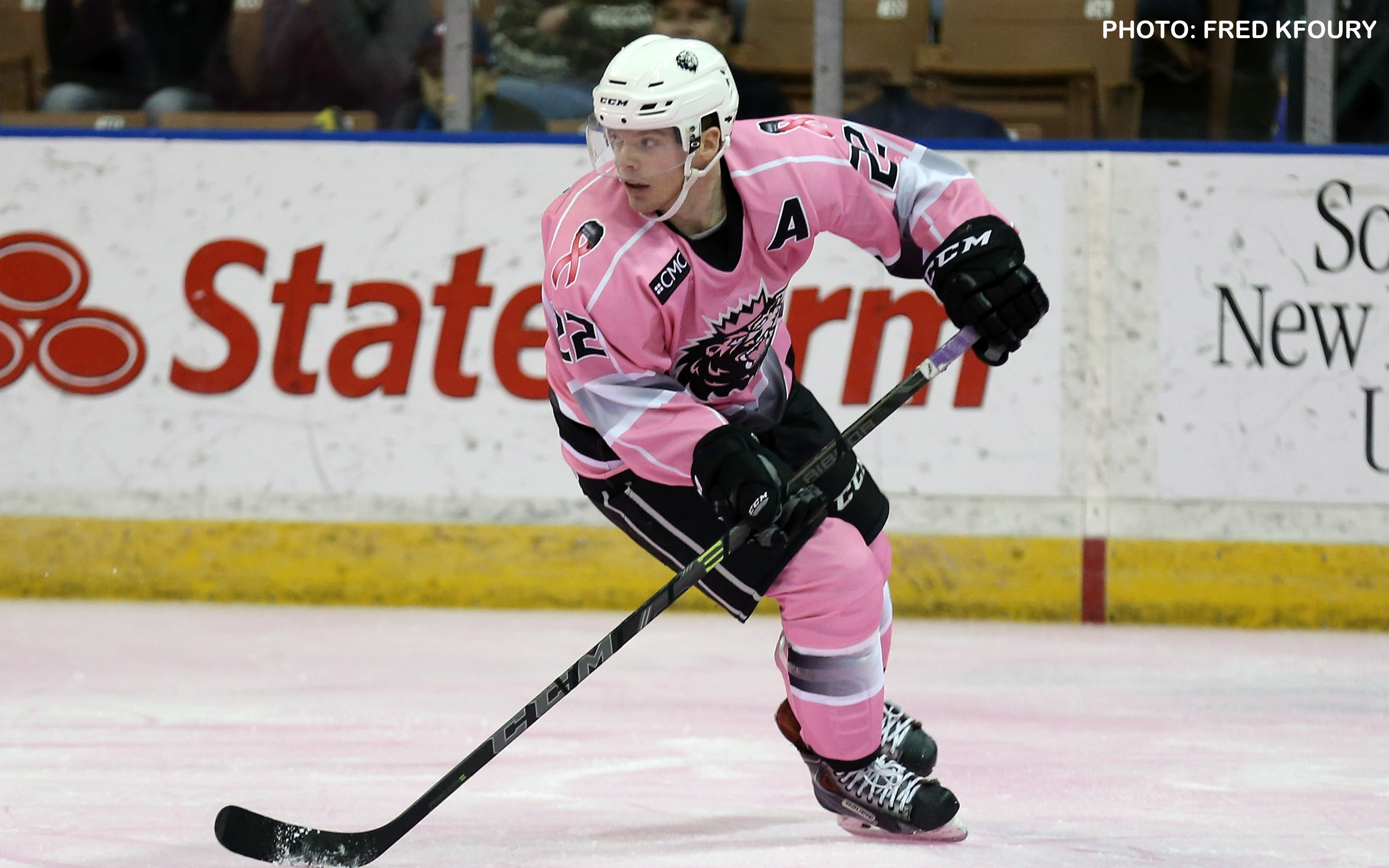 The Manchester Monarchs proved that real men do in fact wear pink as they defeated the Providence Bruins 3-1 Saturday night in the annual “Pink in the Rink” game at the Verizon Wireless Arena.  The previous night, the Monarchs fell short at Providence in a 4-2 loss.  The team was sent home with nothing on their minds but payback that would come the very next day.  The players were fueled by their feelings of retribution along with the many cheers from the roaring crowd of 9,675 fans.

Monarchs’ Michael Mersch was the first player to light the lamp at 19:03 in the first period after deflecting the puck past Smith off of Captain Vincent LoVerde’s drive from the top.  This picture-perfect goal was the direct result of the Monarchs’ ability to quickly create a turnover that translated into a goal.  In an attempt to get the puck out of their defensive zone the Bruins sent the puck along the boards only to be intercepted by LoVerde who slapped the puck back in to be tipped by Mersch to take the lead.

By the time the second period began, it was evident that the bad blood between the two teams was only just beginning to boil.  The physicality of the game had increased immensely from an already aggressive first period.  A total of 10 penalties were called during the second period alone, but there were also numerous slashes and hard checks that were undetected by the refs.  There was no doubt that both the Bruins and the Monarchs were out for blood as the two teams battled back and forth for the second night in a row.

“It’s just two evenly matched teams,” Head Coach Mike Stothers stated. “We play a similar brand. It’s usually good hockey.  I don’t think last night we were as good as we could be or should have been, but I think we responded and rebounded good today.”

After the Monarchs’ Scott Sabourin suffered a double minor for cross-checking and roughing, the Bruins’ Ethan Werek was able to even the score at 1-1.  Werek scored the equalizer goal at 11:50 in the second by chipping the puck past Monarchs’ goaltender, Jean-Francois Berube, with help from his teammates Tommy Cross and Colin Stuart.  The Bruins’ power-play was so effective because of their strong body contact on the opposing Monarchs which caused them to relinquish possession of the puck.  The Bruins quickly gained possession and moved the puck down ice with smooth tape-to-tape passing and fast skating offense.

Later in the game, the Monarchs were also able to convert on a power-play after Brian O’Neil scored his first goal of the night.  Jordan Weal and Colin Miller both tallied assists on O’Neil’s power-play goal at 17:47 in the second period.  This power-play was successful because the Monarchs maintained control of the puck as they worked it along the outside with crisp passes.  The Monarchs held the puck, stick-handling in front of the Bruins’ defenders to create angst with hopes of getting their opponent to bite early.  When the Bruins stepped to the puck, the Monarchs would send a quick pass followed by an immediate shot with tight coverage around the net to clean up the rebound.  This is exactly how O’Neil scored, stealing a rebound off of Smith’s pads and sending the puck into the Bruins’ goal.

O’Neil sealed the deal at 19:01 in the third period after notching an empty-netter for his second goal of the night.  After causing a turnover in the Monarchs’ defensive zone, O’Neil was able to gain possession and skate the puck into the neutral zone, where he dished the puck down the ice and into the empty net.  O’Neil’s goal was the perfect example of the Monarchs successfully capitalizing on the Bruins’ mistakes to creating offensive opportunities.

Although the lines have frequently been altered for the Monarchs, the team continues to show success no matter who their linemates are.   For instance, Mike Richards had recently been paired with Weal and O’Neil which proved to be a very successful pairing of players, but tonight the lineup had been a little different.  O’Neill and Richards remained together alongside Sean Backman, generating quite a bit of success as O’Neil potted a pair of goals.

“I’ve played with a good center pretty much every game for the past year-and-a-half, but playing with Mike Richards, you just learn so much. He’s just a special player.  I grew up in Philly, so I grew up watching him.  It’s pretty cool for me,” O’Neill shared.  “You just soak in as much as you can. He does a lot of little things that you wouldn’t even think of.”

The Monarchs have a bit of a cool down for the next few days as they focus on practicing and getting ready for a busy weekend ahead of them.  The Monarchs next streak of games begins Feb. 13 when they host the Springfield Falcons at home for a 7pm matchup.  Looking forward, the Monarchs hope to use this win to increase their momentum as they head into three back-to-back games against some heavy competition.