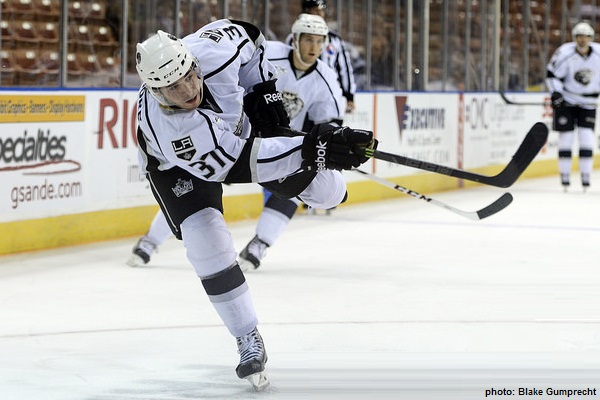 Monarchs’ Offense Overpowers Admirals in a 5-2 Victory at Home

The two-game losing streak for the Monarchs was finally put to rest after this blowout victory against the Admirals. The first goal of the night was scored off a one-timer shot from Monarchs’ Jordan Weal by a quick pass in front of the net from teammate, Zach O’Brien, at 4:05 in the first period.  This was the first of many quick partner passes that translated into goals for the Monarchs.

The Monarchs dominated the majority of the game with their dynamic passes and smooth puck movement from their defense.  The team did an excellent job sending the puck diagonally across the ice in order to switch fields and create more offensive opportunities. The Monarchs relied on their strong sticks to maneuver around the Admirals’ defense in order to send solid stick-to-stick passes through traffic in their defensive zone.

In particular, the offensive line of Zach O’Brien, Jordan Weal, and Justin Auger all worked to create space to outlet the puck through their swift cuts up ice.  In addition, Brian O’Neil, Andy Andreoff, and Nick Shore all worked together to move the puck around the Admirals’ defense.  This movement helped the line to double the team’s lead in the second period when Shore chipped his first goal of the night past Admirals’ goaltender, Yann Danis.  Shore’s goal was a product of crisp passing from Andreoff and O’Neil at 7:13 in the second.  Similarly, Michael Mersch added to the Monarchs’ lead at 2:08 in the third period after hammering the puck past Danis off of a pass from Nic Dowd right in front of the Admirals’ net.

The Monarchs’ offensive lines demonstrated strong chemistry through their supportive playing and deceptive passing around the Admirals.  Their strongest offensive skill was utilizing their short buddy passes quickly in order to beat their opponent with a single pass.  The Monarchs’ passing was no match for the Admirals’ defense. The defending Admirals attempted to break up many of the plays by chasing the puck, but were very unsuccessful in stopping the Monarchs’ offense.

Throughout the game the spotlight was shared with a number of the Monarchs’ seeing as four different players scored with eight others contributing via assists.  This made their team very difficult to shut down because they were not relying on one player to carry the team, but rather working as a unit to overpower their opponent.

The Monarchs defense shined in the second period after surrendering three power plays to the Admirals. However, the Monarchs held strong against their opponent and refused to let up. Defensively, the Monarchs held tight around their net to support their goaltender, Jean-Francois Berube. They capitalized on the Admirals’ mistakes by exploiting their opponent’s weaknesses such as any mishandled pucks or shoddy passes.

During the Admirals’ play, the Monarchs maintained a resilient defensive mindset, which began with the offensive line and worked its way back to defense. Many of the Monarch’s offensive players made several body saves in front of their net.  Specifically in the first power play of the second period, Mersch took a puck off the body and launched it back to the Admirals’ defensive end, giving both teams a chance to change lines.

At 5:14 in the third period, the Admirals finally put themselves on the board after Matt Bailey pressed the puck past Berube. The Monarchs stepped up their game after allowing the Admirals to score and later pushed the lead back again after O’Brien shot top-shelf at 11:33 in the third period. Just a few minutes later, a breakaway for the Monarchs resulted in a goal from Shore at 14:02 with O’Neil carrying the puck through the neutral zone. Just a few seconds later, the Admirals’ Charles Sarault fired one passed Berube to make the score 5-2. Despite the final attempts by the Admirals to take control of the hockey game, they couldn’t match the offensive pressure that the Monarchs displayed.

Defensively, the Monarchs’ allowed very few shots to get through to their goalie, Berube, whose quick reflexes aided in the team’s victory with his 30 saves against the Admirals 32 shots.  Their defense started with the offense, which focused on stealing the puck back before entering their own defensive end through poke-checks and hard body contact. However, when the puck did get through, the Monarchs’ defense would take away the Admirals’ shooting angle whenever possible, resulting in many wide shots away from the net and giving the Monarchs a chance to toss the puck down the ice.

These two teams face off again Sunday afternoon at the Verizon Wireless Arena at 3 pm where they will wrap up their weekend series.  Norfolk Admirals will be coming out with hopes of redeeming themselves while the Manchester Monarchs aim to make the series 2-0.