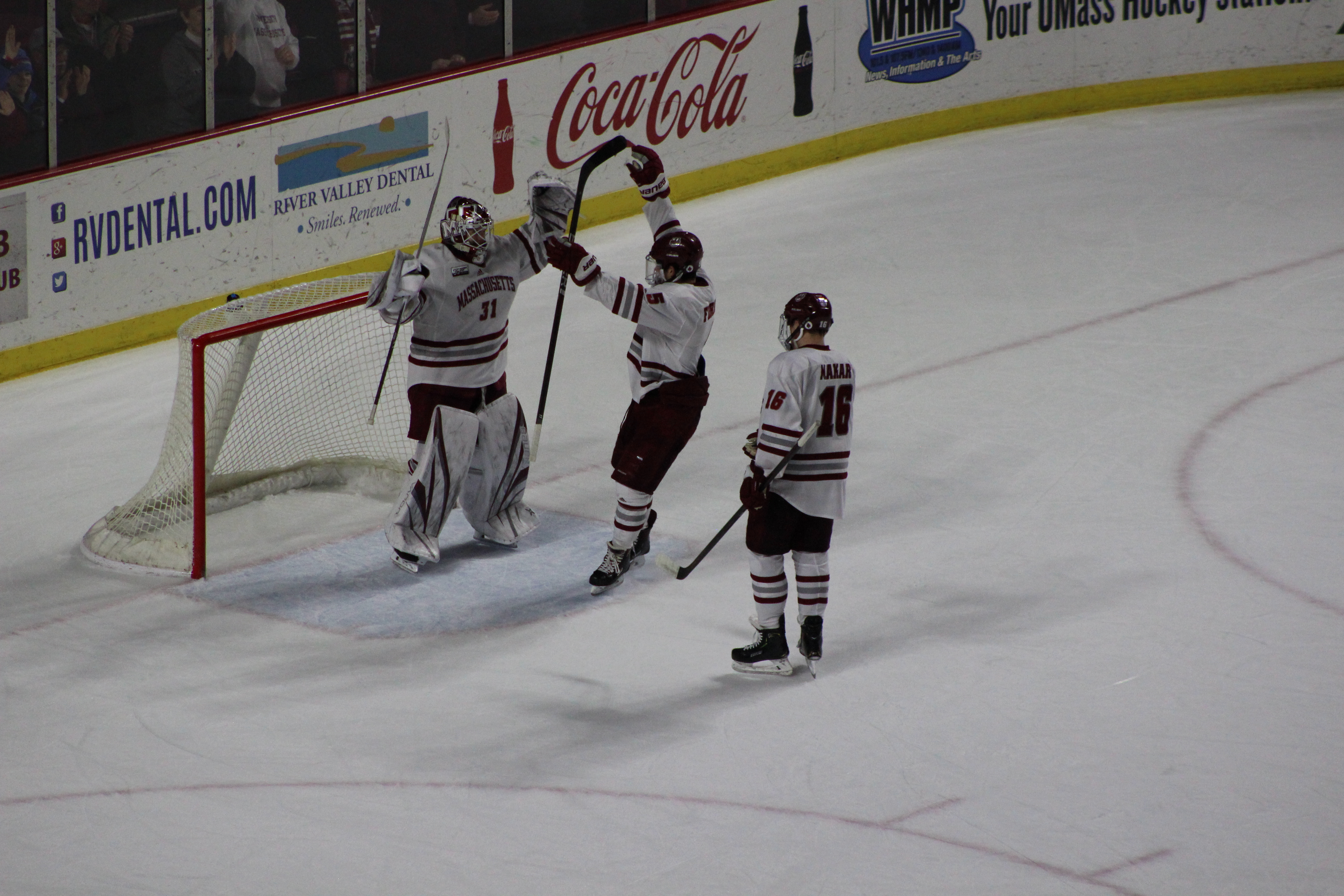 UMass begins the celebration after outlasting BC 4-3 in Hockey East play.

Amherst, Ma. — The Hockey East season is entering its home stretch and there is the customary log jam near the top of the standings. Coming into this weekend the Minutemen hold first place on 26 points, followed by Lowell, Boston College, and Providence at 24, 21, and 20 respectively. Plus New Hampshire, Northeastern, and Boston U. are just behind at 19, 19, and 18. The Minutemen have a home and home with BC, while Providence and Lowell swap home uniforms this weekend as well. So the potential for more chaos on the standings remains high.

The opening period was a fast-paced, heavy hitting, quality scoring chance frame. Both teams came out to set the tone and establish their will. A few shaky moments for Eagles goalie Joseph Woll almost derailed BC early. A funny bounce on a UMass dump into the corner led to a Minuteman chance. Shortly after that, another long shot on Woll bounced and he misplayed the puck almost losing it into his net. However, it was BC that would strike first when defenseman Casey Fitzgerald rifled a shot past Minuteman keeper Matt Murray at 3:54. A Christopher Brown pass from the face-off circle made the shot possible.

The Minutemen counted with a solid play by Jacob Pritchard in the BC zone. Pritchard intercepted a BC pass behind the net and circled out to fire a shot on Woll. BC would ice the puck, and UMass would continue pressuring the Eagles in their end. This pressure led to a UMass power play when Brown was called for Hooking at 6:32. The number two power play unit in the nation had a few solid chances but couldn’t put the puck in the net. UMass had a chance skirt the goal line across the crease and another Pritchard opportunity but the Eagles killed it off.

BC’s David Cotton had a wraparound attempt that Murray stuffed on the post. UMass countered with a four on two rush that culminated with Kurt Keats dinging the post. BC cleared their zone, and yet another UMass dump in resulted in Woll diving to keep the puck out of his goal. The puck was dumped into the corner, bounced out off the BC post after Woll had committed to going behind the net to retrieve the puck. The diving Eagle was able to keep Bobby Trivigno from shoveling the puck into the net.

A Cale Makar Slashing penalty at 17:14 led to a 2-0 BC lead after Junior Connor Moore’s first goal of the season less than a minute later. JD Dudek and Brown got the assists on the play. Almost thirty seconds later Makar was set up by Mitchell Chaffee on a two on one. The sophomore’s 10th of the season cut the led to one as the first period ended with the Minutemen winning the shot battle 9-7 but losing the game 2-1.

The second period was just as frantic. Each team traded scoring opportunities to open the play. BC’s Marc McLaughlin was whistled for Slashing at 6:13. UMass was threatening early on in the man advantage, but BC righted themselves and got multiple clears. As time was expiring on the Eagles penalty some tic tac toe passing from Chaffee and Makar again led to John Leonard tying the game at 8:13. Pritchard again jumped the Eagles pass route at the side of Woll’s net. The senior turned and fired a pass to a charging Philip Lagunov who wristed a top corner shot over the shoulder of Woll to take the 3-2 UMass lead just 1:25 later. UMass outshot BC 11-6 for the period as the two teams traded scoring chances and big hits throughout the second.

The third period had BC on the man advantage early as Trivigno was called for Tripping at 1:11. UMass killed it off easily. After a UMass timeout at 5:35, BC’s McLaughlin had a solid look from the slot that Murray saved. BC was carrying the play at this point, keeping the puck in the UMass zone. The back and forth continued. At 11:31 as BC was pressing, Marc Del Gaizo was called for Interference in front of the UMass goal.

The BC power play was a strange sequence after initial Eagle pressure UMass cleared the puck to the BC end and was able to change out personnel. BC’s Woll tried for the long pass but the Eagles went for a change as well. Icing was called giving the Minutemen penalty kill an offensive zone draw which they cleanly won back to Makar, who in an effort to kill time on the penalty skated the puck out of the zone and back towards his defensive blue line. Makar fired a long-range bomb that Woll jumped up to glove and played it out to a teammate. The resulting BC rush saw David Cotton tie the game on a rebound that he roofed over Murray at 13:11.

The final few minutes of play seen both squads turn the screws on each other. Both goalies were up to the task. As the final seconds wound down off the clock, UMass’ Trivigno and Lagunov applied the forecheck and kept BC penned in below the face-off dots. Makar had a blast from the right point that Woll saved, the rebound was a scramble, Chaffee took the rebound around the goal and passed to McLaughlin who fired home the game-winner for the Minutemen at 19:58. UMass outshot BC for the game 30-24.

“Obviously a very, very close hockey game,” said Eagles coach Jerry York. He spoke about the final play of the game that led to the game-winning goal against his team. “Unfortunate at the end our defenseman lost his stick, Connor Moore. But we had a chance, had puck possession, clocks winding down and then we kind of turned the puck over deep with a cut back play.” York had just watched the play on video and was complimentary of Chaffee and goal scorer McLaughlin afterwards, “Kid made a nice pass to a defenseman sliding down.”

“We’ve had a lot good wins this year maybe this might be as big a character win as we’ve had,” UMass head coach Greg Carvel said. “To be down 2-0, I don’t know if we’ve been down 2-0 to come back to win, and then to give up a goal late in the game, and to tie it up. And after that point, I think we had three or four really good scoring chances to win the game. It’s an exciting way to finally win it.”

Tonight, 7835 spectators witnessed the first win for the Minutemen over the Eagles since 2013, and first in Amherst since 2012. BC was 9-0-1 in their last 10 against UMass. Coach Carvel notched his first win over the Eagles since taking the helm, and the Minutemen topped their most wins in a season besting their previous of 21 in 2006-07. The two teams face off tomorrow night at Conte Forum for an 8:00 pm face-off.