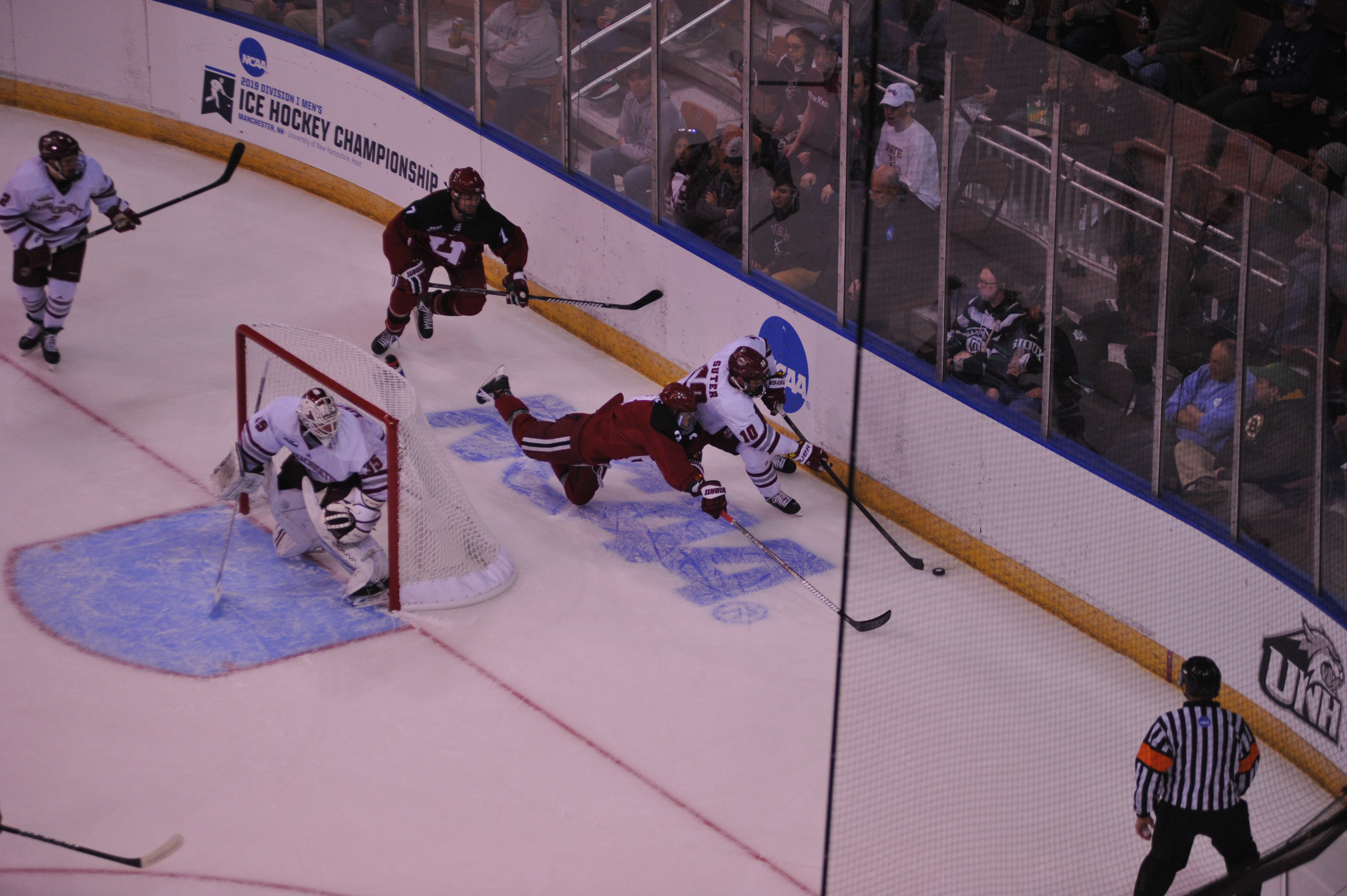 Manchester, NH. —  The Battle of Makar vs Fox didn’t materialize as hoped, but the two teams played a solid game that showed why they were worthy of qualifying for the NCAA tournament.

The opening period started off with the two teams feeling each other out. The Minutemen had a decent look around four minutes in when a rebound off of Michael Lackey’s pad shot out front but just out of reach for UMass. At 4:51 it appeared that Nathan Krusko put Harvard on the scoreboard first with a turn-around backhander off the face-off, but the referee ruled no goal. After further review, the call on the ice stood, no goal due to goalie interference.

The first penalty of the game came courtesy of a Marc Del Gaizo Interference call at 9:28. The nation’s top-ranked power play was unable to generate much against the Minutemen penalty kill. UMass had a shorthanded breakaway with Bobby Trivigno intercepting a defense to defense pass and going in on Lackey who turned away the bid. As the penalty was expiring UMass defenseman Colin Felix threw a shot on Lackey that Mitchell Chaffee tipped just wide of the goal.

UMass would get its first chance on the man advantage when John Marino was called for Interference at 12:17. Harvard had good stick play to keep UMass and the second-ranked power play off the board. Lackey had a nice save on a  Ty Farmer shot from the point. Tempting fate again was Harvard’s Lewis Zerter-Gossage when he was whistled for Tripping at 17:55. UMass passing was on point but Lackey was seeing the puck well and making the saves. The first period ended in a goalless draw, but the Minutemen had a resounding 12-3 advantage in the shot department, while Harvard controlled the faceoff circle 11-5.

The second period was more action-packed with a faster pace of play. Lackey had an early pad save on Trivigno to open the period. Harvard was applying pressure around the 14-minute mark. The Crimson’s Jack Donato had a breakaway opportunity thwarted by a backchecking Cale Makar, who lifted the stick of Donato and poked the puck away into the corner.

At the other end, Jack Rathbone had a poke check of his own on John Leonard. Nathan Krusko had a wraparound attempt on Filip Lindbergh that was kept out of the UMass net, which led to a UMass breakout. Kurt Keats carried into the Crimson zone for a wraparound attempt of his own that Lackey made the save on, the rebound was knocked to Anthony Del Gaizo, but Lackey made a save and on his second attempt Del Gaizo banged home the first goal of the game at 14:15.

UMass was flying after that but Harvard weathered that storm. Harvard’s Zerter-Gossage had two tremendous chances on this shift that Lindbergh turned aside. A Makar shot from the top of the left circle was tipped off the post by Leonard. The second ended with UMass outshooting Harvard 12-9 and the Crimson still in control of the dots 18-15.

The third period was where UMass separated themselves from Harvard. Lackey, who played great all game, had a double save on Philip Lagunov to open the period. Zerter-Gossage was a bit snake-bitten tonight as he again had trouble in front of Lindberg. A flukey play beside LAckey seen the puck bounce over the stick of Fox and Leonard swatted it on the net. The puck managed to trickle in between Lackey and the post for the 2-0 UMass lead at 7:24.

Harvard seemed to answer with pressure but that ended up leading to UMass third goal. Makar corralled a loose puck in the Minuteman zone, carried it out to the red line and fed a streaking Boeing, who found space behind the Crimson defense. Boeing was in alone on Lackey and sealed it at 9:51. The Crimson did keep fighting but couldn’t generate a solid chance on Lindberg. An empty net goal at 19:36 closed out the Crimson season and propelled the Minutemen into the Regional Final tomorrow at 6:30 pm. UMass outshot Harvard 36-17 for the game.

After the game, Harvard coach Ted Donato spoke highly of the competition. “I would like to congratulate UMass, I thought they were certainly the better team tonight, I thought they were fast, beat us to pucks and made us play in our own zone too much for us to be able to take any momentum in the game,” said Donato. “They made some key blocks and some key saves but I wish them the best of luck and they were certainly the better team tonight.”

He then talked about the teams six seniors and what they contributed to the program over their four years. Goalie Michael Lackey, defensemen Adam Baughman, Jacob Olson, and Viktor Dombrovsky, and forwards Micahel Floodstrand and Lewis Zerter-Gossage went to four straight ECAC Final Fours, won an ECAC tournament title, a regular season ECAC title, an Ivy League title, a Beanpot, qualified for the NCAA tournament three times and reached a Frozen Four once in 2017.

“Probably the worst part about coaching is walking into that locker room when you know seniors have played their last game with a lot of their best friends, representing a school that they love,” coach Donato said. “You’re always challenged as a coach as to what kinds of words will even have an impact and that class will have gone to three NCAA tournaments, four ECAC final fours, been to the final four, been an Ivy League champion, ECAC champion and having also had a son in that class who’s no longer in that class but I feel like I really became very very close with a lot of those kids. I’m not sure there’s a better word other than ‘love’ really and it’s not something you really throw around the locker room of hockey very often but I guess you love and respect everything that they brought to the team and this group, in general, was a lot of fun to be around, very much a team, always stuck together and I think because of it we were able to have some success and I think that all starts at the top with your captains.

“You’re talking about a senior class, every one of them has been all-academic, ECAC all-academic for every semester they had an opportunity to be and whether its community service and just overall being great kids and being great representatives of the University and the program, that’s the stuff as a coach the only two words you can come up with is love and respect. They mean a lot, I certainly can capture it in 30 seconds with guys sobbing and hugging each other and recognizing that their college career is over with all their friends. It’s a scene that doesn’t often get covered in the media but I can tell you as a coach that it is incredibly tough to swallow.“

His counterpart for UMass Greg Carvel, took a more historical look at the evening.

“That was a solid game for us. All year long, after every time we lost a game, we’ve come back strong and that was the case again tonight,” Carvel said. “We had a game plan that I thought our guys executed extremely well. Great to get the victory over a solid team like Harvard, it’s great for our program that hasn’t been to the NCAA in 12 years. Our program doesn’t have a lot of history, but that team in 2007, is somebody we’ve always looked up to and wanted to make those guys proud. It looked like another one of those games where we were getting a lot of chances but just couldn’t get the puck in, but once we got one in, the pucks just started flowing in the net. I’m really proud of my group, they played extremely hard and played playoff hockey.”

The Minutemen move on to face the winner of the Northeast Regional’s second game, Notre Dame vs Clarkson, on Saturday night at 6:30 pm.