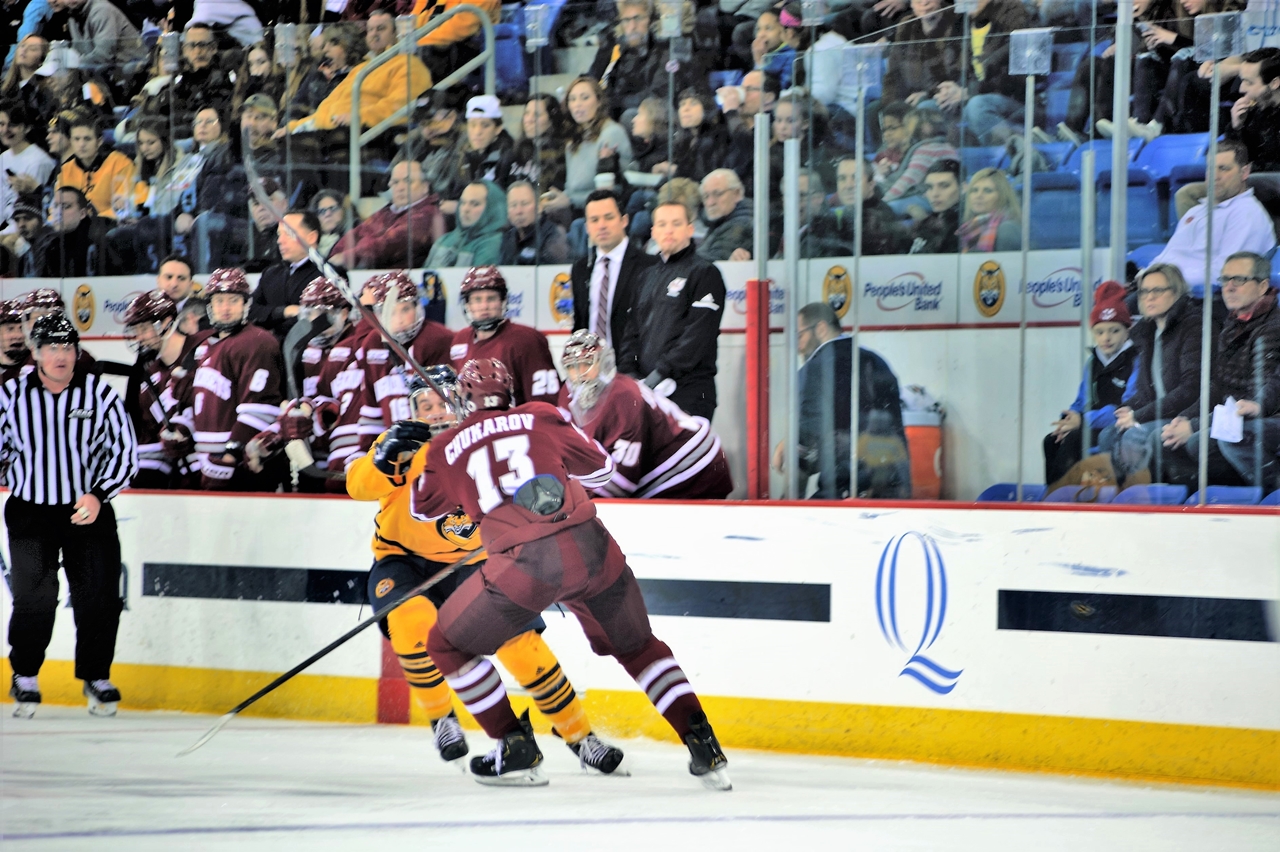 UMass vs Quinnipiac. Credit to Tomas Villalon Jr, Inside Hockey

Amherst, MA — Friday night, the Massachusetts Minutemen left Hamden with their first loss since late October. They left licking their wounds looking for a chance to get back on track. Saturday night provided that chance against the team that beat them the prior night and in front of their biggest and loudest crowd in 14 years. With the Mullins Maniacs support, the Minutemen welcomed the Quinnipiac Bobcats with a reminder of how UMass earned the Nation’s top ranking.

Mullins felt like a perfect homecoming as the Minutemen outshot Quinnipiac 13-8 and controlled the pace of play. But a night after Andrew Shortridge stonewalled UMass, Keith Petruzzelli took his turn. The sophomore Detroit Red Wings draft choice silenced the Minutemen attack and extended their scoreless streak to four periods.

Pace felt slowed in the second compared to the opener, but the physicality did not relent. UMass was overzealous at points, and the Bobcats pounced. Chase Priskie lasered a power play rip from the slot to stake Quinnipiac to the lead. Quinnipiac continued an offensive push, but Murray held firm. He sent the game to the second intermission only down 1-0, still extending the scoreless streak to five periods.

UMass entered the final frame desperate for a goal and wet their fans’ appetite. After buzzing around the net, senior Ivan Chukarov lasered a shot home from the high slot. The goal was the first of the year and a watershed moment for the Buffalo Sabers draft choice who played through many lean years and crowds in Amherst.

The Minutemen kept pounding the offensive zone and were rewarded when Colin Felix, John Leonard, and Mitchell Chaffee combined for a perfect forecheck. The puck went to Jacob Pritchard, and the senior transfer from St. Lawrence gave UMass their first lead of the weekend. Quinnipiac offered a counterattack, but Matt Murray recorded 10 of his 27 saves in the final frame. Bobby Trivigno potted an empty-netter for a 3-1 final.

Quinnipiac Head Coach Rand Pecknold offered strong criticism of his team while also noting the impressive first half of the season.

“We struggled mentally from the get-go, Pecknold said. “Disappointing with our effort tonight. We’re a young team with 12 freshmen. It’s kind of interesting, that youth kinda permeates upwards. So, we’ve got at times, panic in our game and we had that tonight. Outside of tonight, 14-3 is fantastic. A lot of great things, we’ve set ourselves up nicely for a stretch run.”

The Bobcats end their first semester at 14-3-0. They stand in second place in the ECAC, only one point behind the Yale Bulldogs, with a 6-2-0 record. The Bobcats sit for exams then resume play against the Colgate Raiders at the Nassau Coliseum on Long Island. Puck drops at 5 pm on December 29th. They next host a regular weekend against Colgate and Cornell on January 4th and 5th. Puck drops at 7 pm both nights in Hamden.

“I thought that was a tremendous series between us and Quinnipiac, ” Carvel said. “Two similar teams. I hope the fans understand how good that team is and how hard it is to beat them.”

On his seniors, particularly Chukarov, Carvel noted: “I was excited for him. He’s been through some ups and downs here. He’s sometimes been the seventh defenseman. He’s a senior on a very young team. He’s a great kid, tries to do everything right, and you like to see him do well. It’s not often that our seniors are the ones who we’re applauding at the end of the game. But to see Chukarov and Keats was outstanding tonight. It’s just another thing that makes you feel great about the weekend.”

UMass improves to 13-2-0. They close the first semester of the season on Tuesday, December 11th against the ECAC’s new first-place team, the Yale Bulldogs. Puck drops at 7 pm at the Mullins Center.