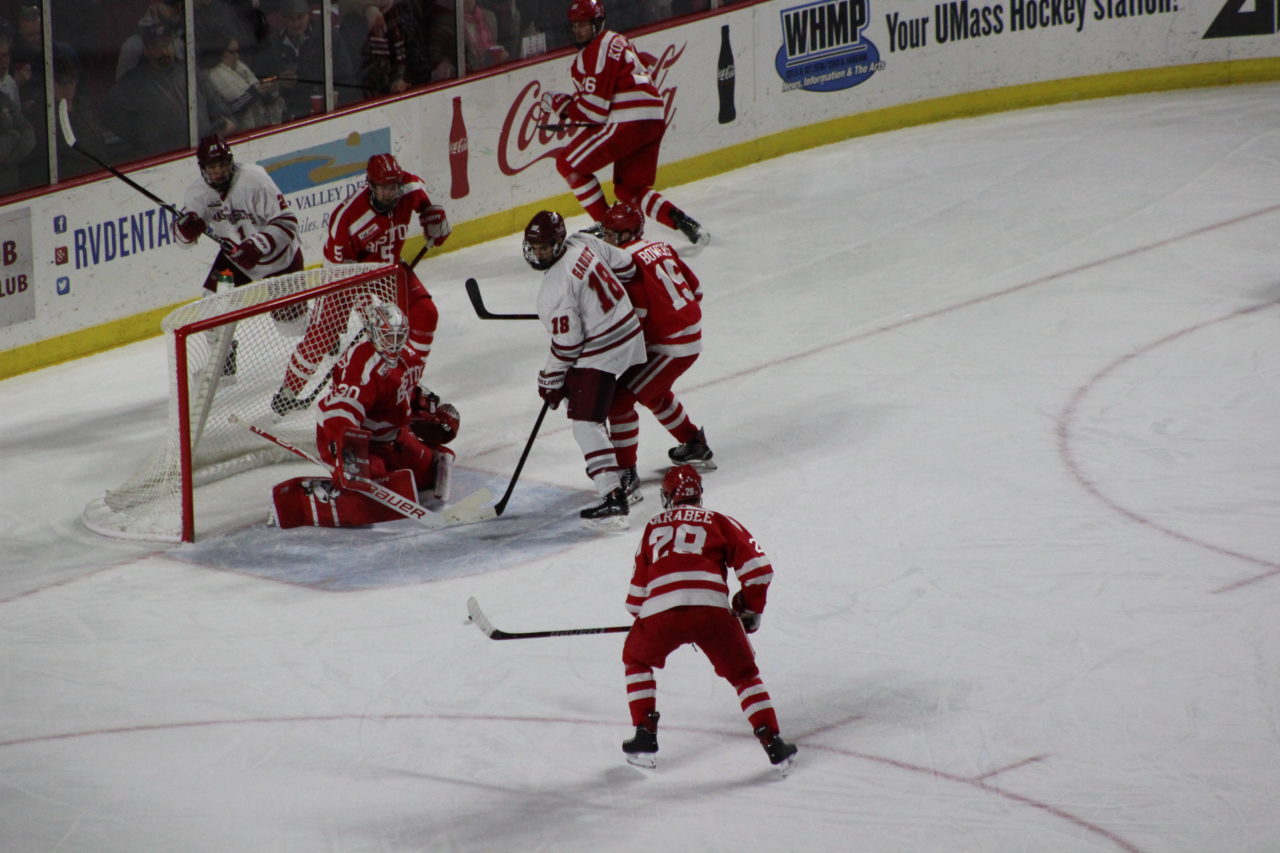 Minutemen finish off Terriers for first-ever sweep of BU.

Amherst, MA. — The University of Massachusetts Minutemen played host to the Boston University Terriers with six points separating the two teams in Hockey East play. The Minutemen are in first place with 24 points while the Terriers are sitting in fifth with 18 points. Last Friday UMass outlasted BU 7-5 at Agganis Arena. With a win tonight it would be the first time that UMass has ever swept BU in a season or won back to back games against the Terriers in a season.

The first period saw the Minutemen outshot the Terriers by a 14-8 margin. UMass actually played a sloppy period, especially in their defensive zone. A few miscues trying to break out of the zone, misfiring on passes, and being outmuscled in front of goalie Filip Lindberg was the story for the maroon and white. BU was very solid on their zone defense, they stopped the Minutemen from taking advantage of any rebound that Jake Oettinger gave up. The junior goalkeeper’s solid play continued from Monday’s outstanding Beanpot performance.

BU jumped out to the early 1-0 lead on a Power Play goal by defenseman Dante Fabbro. UMass was called for Too Many Men on the Ice at 5:50. With Oliver Chau serving the bench minor, a nifty Ty Amonte cross-ice feed set up Fabbro in the left circle for his sixth of the season.

An Interference call on UMass forward Kurt Keats put BU back on the man advantage at 19:52. Even with eight seconds on the clock, the Terriers threatened as the faceoff was to the right of Lindberg. The power play would carry over to the second period.

David Farrance would hit the crossbar with a shot that beat Lindberg to open the second period. UMass found its groove after killing off the carried over BU power play. John Leonard walked into the BU zone and fired a wrist shot from the slot past Oettinger tying the game at 1 apiece at 6:20. Shortly after this goal, Cale Makar had an end to end rush where he set up a charging Jack Suter out front of Oettinger to take a 2-1 Minuteman lead at 8:06. UMass added their third unanswered goal at 15:07 when Jake McLaughlin knocked home a Suter rebound to the left of BU’s goal. McLaughlin got the play going when he carried the puck into the BU zone, dished to Brett Boeing, kept moving to the net, and tapped in the loose puck. The Minutemen had a barrage of 16 shots on Oettinger, bringing their total through two periods to 30. BU had just four shots for a total of 12.

The third period was rather anti-climatic. BU’s Ryan Cloonan did split the UMass defense and catch a pass that led him in alone on Lindberg who poked checked the puck away for the save. UMass would be called for two penalties, one at 2:46 on Marc Del Gaizo for Hitting From Behind, the other at 6:58 on George Mika for Cross-Checking. The Terriers had a few opportunities but were unable to penetrate the UMass goal.

The Minutemen added to their score when Marc Del Gaizo swatted home a Jacob Pritchard fed on the Power Play at 11:56. BU’s Joel Farrance was in the box for Tripping, the penalty lasted 17 seconds. UMass defenseman Ty Farmer was called for Cross-Checking at 13:03. UMass’ Bobby Trivigno was a one-man penalty killer to start the penalty. He outskated a Terrier defender for a breakaway that Oettinger stopped. Then he stole an errant pass at the BU blue line and was in alone again only to have Oettinger turn him away once more.

Albie O’Connell pulled Oettinger to try to reign it in a bit, but a Ty Amonte Holding penalty at 17:40 put the 6’-5” keeper back in goal. With 43.1 seconds left BU’s Shane Bowers scored a short-handed goal to make it 4-2 UMass. That is how the game would end. The Minutemen outshot the Terriers 39-27 on the evening.

After the game, O’Connell said “Once they (UMass) scored their first goal it became a little bit of a wave out there, for them. They got a lot of momentum. The crowd was really into it.” O’Connell added “The second period started out well, ended bad. That ended up costing us the game.”

UMass coach Greg Carvel added “I thought we did a great job defensively. It’s what I wanted to see tonight. I never worry about our team scoring goals. Always more concerned about the play without the puck. Real happy about the way we played.”

When asked about sweeping BU for the first time in program history Carvel was even keel. “Yeah, it’s awesome. Our goal this year was to bring respect to our program in this league and nationally. We’ve done a lot of things this year that haven’t happened in a long time. It’s a special group.”

BU returns to action Monday against Harvard in the Beanpot consolation game at 4:30 pm. The Minuteman travel to Lowell to take on the Riverhawks for state school superiority. Puck drop at 7:00 pm.