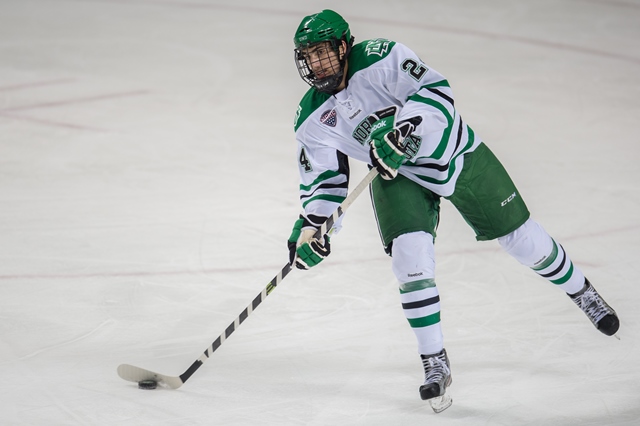 Minneapolis, MN – Coming into the National Collegiate Hockey Conferences Frozen Faceoff three of the four teams needed to win the tourney to continue their season. The University of North Dakota came into Friday’s game as an NCAA bubble team. At a minimum, they need to win at least one game this weekend.

After being shutout 3-0 by Miami University, UND has one more chance to extend their season. They must get a win tomorrow against Western Michigan if they’re going to have a chance. They also will be scoreboard watching.

Again, for those asking, it appears if UND, UW & Lowell win, UND is in. If not, UND is out.

The game was closer than the score, UND outshot Miami 32 to 28, but they weren’t able to get anything past Miami sophomore goalie Ryan McKay who was very solid and stopped 32-of-32 shots. UND goalie Zane Gothberg stopped 25-of-28 shots, but struggled with the puck at times.

One of the big concerns coming into the tourney was the condition of the Target Center ice. The ice appeared to be a little soft, but it didn’t look like the ice was a factor in the games on Friday.

“It improved from yesterday,” UND senior defenseman Dillon Simpson said. “It’s tough place for the game of hockey, where it isn’t usually played. I think they did a good job trying to make it as good especially after practicing on it yesterday. All in all, it was okay. It was a little soft, but at the end of the day it was fine.”

After the game, UND head coach Dave Hakstol was very complimentary to the RedHawks.

“Hats off to Miami University, they played a great game tonight,” head coach Dave Hakstol said. “They played hard, as did our team. Both teams battled hard. They scored the first goal of the game – got a critical one in the second period and we couldn’t fight our way back into it. This one is over, it’s in the past. Our focus is now moves to tomorrow at three thirty in the afternoon.”

On February 15, 2014, UND ran over the Miami RedHawks 9-2, at Ralph Engelstad Arena. At the time, Miami didn’t have the services of Coleman, who was injured. This time around, Miami was a much different team with the junior from Plano, Texas.

“They’re a lot better team than we played a month ago, junior forward Mark MacMillan said. “Obviously they got (Blake) Coleman back from injury and I think that he put a spark in their team. They went in and swept Saint Cloud last weekend and came in and played a great game against us tonight. Much different team than we faced last time.”

With the loss to the RedHawks, UND (22-13-3) is currently sitting at 15th in the Pairwise. They need to win the third place game to extend their season, but they also need help. The UND captain was asked what his team needed to do, to get the win tomorrow.

“I think first and foremost, it starts with myself, handling things the right way,” Simpson said. We got a young team and we have good group of guys. We all know the task at hand, they now what needs to be done.”

The Miami University head coach Enrico Blasi seem relieved that his RedHawk team (15-19-3) was one game away from going to the NCAA playoffs after finishing eight in the NCHC standings.

“Obviously, a real good game for us,” Enrico Blasi said. I thought Ryan (McKay) made some really huge saves when we needed them. Timely goals, and timely bounces.  I thought we did a good job keeping them on the outside for the most part.”

Blasi continued, “I was thinking on the bench that sometimes you have to have a little bit of faith in your team. About a month ago I don’t think any of you guys would have picked us to be here in this position. I always say everything happens for a reason. Guys stayed with each other. They played hard. They practiced hard. They stayed positive. We’re going to the championship game tomorrow night.”

UND faces off against the Western Michigan Broncos in the third place game at 3:38 p.m. Central, tomorrow at the Target Center.

The NCHC announced that 9,113 fans attended today’s games at the Target Center.