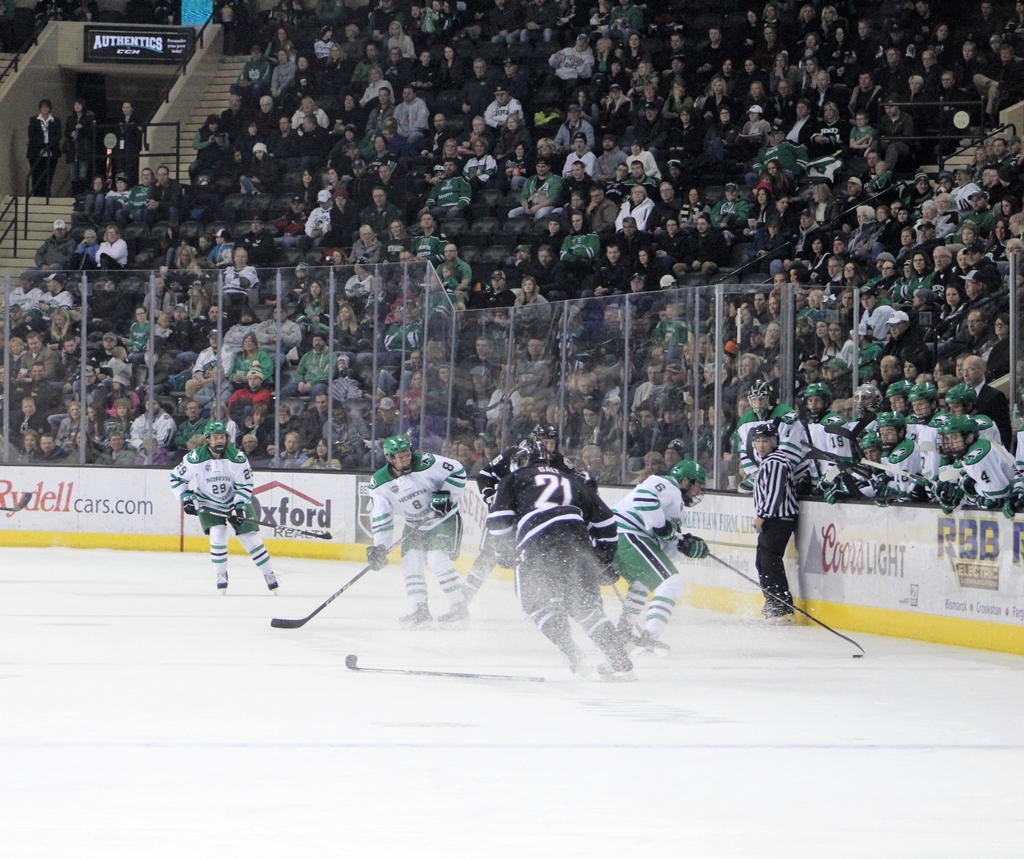 Grand Forks, ND – Coming into this weekend’s series between the University of North Dakota and Nebraska-Omaha, Fighting Hawks fans had to feel good about their team’s chances. The Mavericks had one of the worst defenses in Division I college hockey, they were ranked 59 out of 60 teams. On the flip side of that equation, the Mavericks are fifth in the nation in scoring. Either way, someone was going to score some goals.

In the first period, the Mavericks appeared to be a step faster than the Fighting Hawks. That was a common theme for most of the night. UND lost a lot of the 50/50 battles.

At the 07:14 mark of the first period, UND got into penalty trouble. Junior defenseman Christian Wolanin took a two-minute penalty and also picked up a 10-minute misconduct. UND’s troubles snowballed from there, and they never really got any momentum. The Fighting Hawks ended up chasing for most of the game.

“One of our best players takes a 10-minute misconduct and he’s in the box,” head coach Brad Berry said. “Now we’re down to five D and one of your best offensive guys is in the box. You see a little bit of frustration creeping into the game. Getting down and trying to get back again.

“Second period, I thought we did a good job in the last half of the period – putting four or five shifts together and getting some opportunities and in the beginning of the third we gave up another goal.”

VIDEO: Watch Shane Gersich bury a penalty shot to even up @UNDmhockey and Omaha at 1-1 late in the 1st. #UNDproud pic.twitter.com/ydrHfl5ZeH

At the 09:44 mark of the third period the Mavericks extended their lead with a goal from forward Zach Jordan. After that, the Fighting Hawks were unable to get any momentum going. Mavericks forward

Offensive production seems to be the biggest issue facing this team. Who’s going to step up?

“We try to score goals every game,” Gersich said. “We’ve been working on a lot of things in practice – getting bodies to the net and creating chances. I am not concerned. I have confidence in this group. I believe in everyone in that locker room, and things will come.”

With the loss, UND drops to 10-6-5 and 5-4-2 NCHC. The Fighting Hawks remain in second place but the Western Michigan Broncos and the Denver Pioneers are one point back in the standings. With the win, the Mavericks improve to 10-8-1 and 3-6-0 and are now tied for seventh with Duluth.