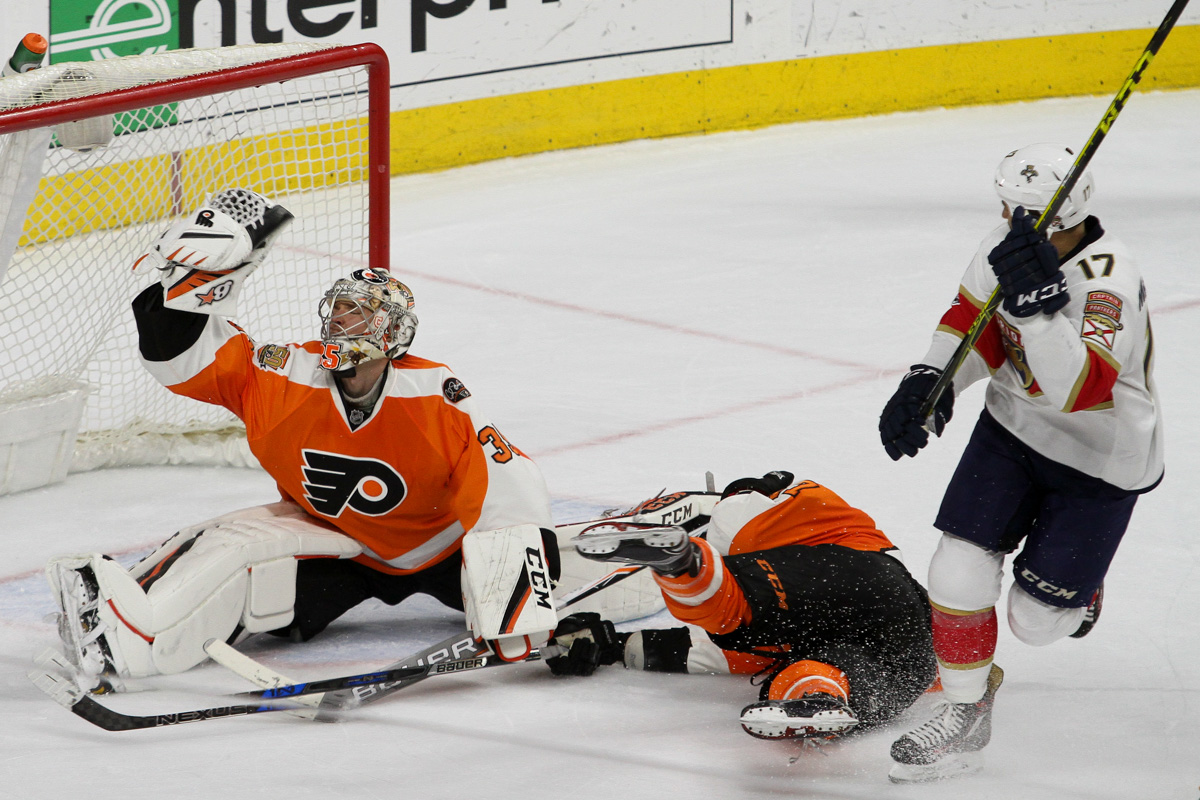 Welcome to Philadelphia Valtteri Filppula! As Wednesday’s NHL’s trade deadline came and went, the Flyers made a move sending defenseman Mark Streit and two draft picks to the Tampa Bay Lightning in exchange for center Valtteri Filppula in an attempt to bolster an offense that has been underachieving. So far, General Manager Ron Hextall must be feeling pretty good about himself.

Down 1-0 midway through the third period, Brayden Schenn found his new teammate in front of the net, and Filppula was able to get his stick on the puck and poke it past Panthers’ goalie James Reimer. The goal was Filppula’s 8th of the season and 1st wearing the orange and black.

Having just come over from Tampa Bay, Filppula was asked how it felt to be immediatley thrown into the lineup without even practicing once with his new teammates:

“I mean yeah I think it goes a little bit both ways, at the same time you’d like to have a little bit of time to talk about and have a couple of practices but it feels good now when we won so everything’s good,” Filppula said.

The Panthers lone goal came as an unassisted, short-handed goal by Aaron Ekblad in the second period when Claude Giroux misfired on a cross-ice pass in his own zone. Skating at full speed the other way, the puck went right to Ekblad’s stick who then faked out Giroux before firing a slap shot past Mason’s glove side for his first career short-handed goal.

Giroux, who’s always hard on himself, explained what happened on the Ekblad goal:

“Yeah, I thought Schenn was open and then I played that wrong defensively, it’s frustrating,” Giroux said. “I personally gave Florida a point so it’s frustrating and I have to be better. But you know what, the guys battled back and the way we played tonight was great. If we play like that we’re going to win a lot of games so we have to stay together in the room here and we had fun tonight so that’s one of the reasons why we came back I think.”

Despite allowing the goal to Ekblad, Flyers’ goalie Steve Mason played lights out for the second game in a row making key save after key save down the stretch. Mason, who recorded a shutout in Tuesday night’s game against the Avalanche, stopped 39 of 40 shots on goal tonight.

Similarly, both of Florida’s goaltenders had terrific games. Roberto Luongo, stopped all 13 shots he faced in the first period before having to leave the game with a lower-body injury. James Reimer began the second period and stopped 35 of 36 shots on goal for a grand total of 89 regulation and overtime shots on goal.

Jordan Weal and Jake Voracek scored the game clinching goals in the shootout for the Flyers.

Voracek was asked after the game how much of a lift Mason can give to the team:

“Of course he can. He’s a great goalie,” Voracek said. “With that stop he made at 20 seconds left, it was huge. Made a couple stops in overtime. It was a great performance.”

The Flyers will have to decide what it wants to do with Steve Mason at the end of this season as he can become an unrestricted free agent on July 1st.

Prior to Wednesday’s trade deadline, Ron Hextall signed backup goalie Michal Neuvirth to a two-year contract extension while choosing not to extend Steve Mason’s contract beyond this season.

Mason has said that he wants to stay with the Flyers, but Neuvirth’s signing puts Mason’s future as a Flyer in doubt:

“I’ve been here for a handful of years now. I kind of feel like there’s some unfinished business,” Mason said. “I want to be a guy who helps this team get to the next level.”

With the Flyers’ playoff hopes currently in doubt, there may be more than just goaltending changes in the off season.

The Flyers are now 30-26-7 with 67 points which currently puts them in 5th place for one of the last two Wild Card spots in the Eastern Conference.

Starting this Saturday, the Flyers begin a 4-game road trip beginning with the League’s best team Washington Capitals. With 19 games left in the regular season, the Flyers have a lot of ground to make up to have a fighting chance at one of the two Wild Card spots. It’ll be an uphill climb to be sure, and some of the player’s futures with the organization may be at stake.