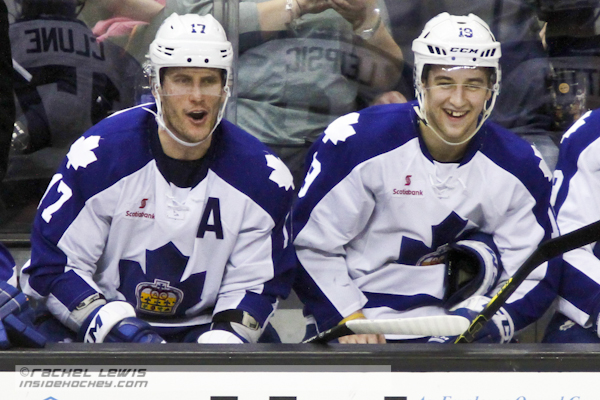 The Texas Stars have an uphill battle if they are to win their second Calder Cup. The Stars dropped Game Five, 6-2 Saturday night at HEB Center in Cedar Park, Texas to the visiting Toronto Marlies, who now lead the best of seven American Hockey League championship series, three games to two.

Texas is the top farm team of the Dallas Stars, while the Marlies are affiliated with the Toronto Maple Leafs.

“It’s happened many times where we’ve been able to grab points and wins when we’ve really needed them, and throughout the year there’ve been little lessons that will help us for Games Six and Seven,” said Stars’ forward Curtis McKenzie after Toronto jumped out to an early 2-0 lead. “The two early goals stunned our team and was something that hasn’t happened to us all year.”

Left wing Trevor Moore, center Colin Greening and winger Carl Grundstrom also scored for the Marlies to back the 23-save goaltending of Garret Sparks. Toronto can win the Calder Cup at home in Ricoh Center on Tuesday, or on Thursday if Texas wins Game Six.

Defenseman Gavin Bayreuther and center Sheldon Dries scored for the Stars. Goalie Mike McKenna gave up five goals on 22 shots and was replaced by Landon Bow at the start of the third period. Bow made six saves and allowed one goal in relief.

Toronto came out quickly as Johnsson opened the scoring on a breakaway with his team-leading eighth post-season goal at 1:32. Just 47 seconds later, Moore made it 2-0 when he connected on a rebound.

Bayreuther ignited the HEB Center crowd when he beat Sparks 4:06 into the second, but Greening and Rosen responded with goals 1:07 apart to make it 4-1. Rosen added his second of the game later in the period for a 5-1 Marlies lead. Grundstrom and Dries traded goals 15 seconds apart midway through the third stanza.

“Some nights it works out where the difference is shown on the scoreboard, but a lot of nights it shows up in terms of keeping pucks out of our end and moving things up the ice and getting our forwards in good spots in the offensive zone,” said Marlies coach Sheldon Keefe. “That’s what happened for us tonight.”

Toronto won Game Three by a 2-1 score in Texas to take a two games to one lead, and the host Stars knotted the series at two games apiece with a 3-2 win in Game Four. The two teams split Games One and Two in Toronto.

The Stars are making their third trip to the Calder Cup Finals in their nine-year history. They lost to in six games to Hershey in 2010 and defeated St. John’s in five games to claim the Calder Cup in 2014.

The Marlies are trying to become first Maple Leafs farm team to win the Calder Cup since the 1981-82 New Brunswick Hawks, an affiliate they shared with the Chicago Blackhawks. The last time an AHL team fully stocked by the Leafs won it all: the 1967-68 Rochester Americans.