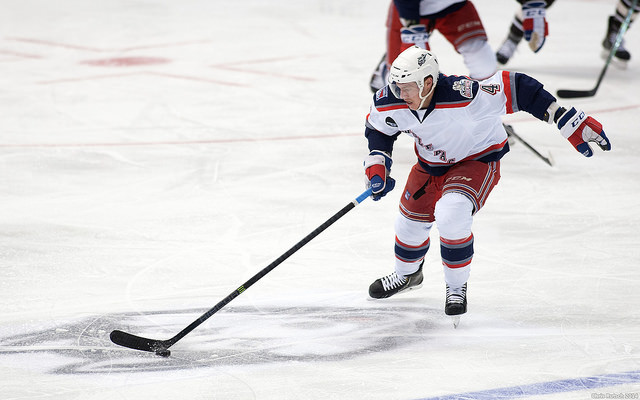 Friday night’s game against the Syracuse Crunch (18-7-3-0) left the Hartford Wolf Pack (16-10-2-1) a little crippled. The game, to say the least, was a disaster on the Wolf Pack’s part. Fight after fight the Pack just could not keep their composure, with every shove from a Crunch player, a Pack member responded. It was a pretty nasty game, filled with fights and penalty minutes. Needless to say, Friday night was not a good night for the Wolf Pack.

Taking the ice at home again Saturday evening to play the Lehigh Valley Phantoms (13-10-4-1), the Pack knew they had to redeem themselves. For their last game until after the Christmas break, the XL Center was filled with excited fans. Holiday cheer was certainly in the air, as the crowd donned Santa hats and holiday apparel.

The Wolf Pack were looking much better in the first period than they did on Friday. Although there was some pushing and shoving in the beginning, Hartford kept their composure. They did not want to be lured into unnecessary and silly penalties. Goaltender Cedrick Desjardins got off to a good start, making several pretty saves. But with 20.7 seconds left in the first, Phantoms’ Zack Stortini managed get a goal over Desjardins’ pads.

Wolf Pack forward Ryan Bourque called the first period “mediocre.” Though overall the Pack were keeping their cool on the ice, they weren’t going after the puck in the same way they usually do. The second period changed that, it seemed the period was filled with back and forth play, including power plays for both teams.

The Wolf Pack finally managed to tie it up at 10:06 of the second with a quick shot by Chad Nehring, assisted by Conor Allen and Shawn O’Donnell. It was Nehring’s second of the season. The period ended with the game tied at 1.

The third period was a dull one; a lot of back and forth play. Though the team had been playing better than Friday night, their power play unit failed to convert on four opportunities. As regulation time ended, the score remained 1-1, sending the Wolf Pack and Phantoms into overtime.

As the Pack took the ice for OT, fans moved to the edge of their seats, nervous tension hung in the air. Could the Wolf Pack make the redemption they so desperately needed? Desjardins stonewalled the Phantoms throughout the extra session before Ryan Malone snagged a breakaway. After missing his initial shot, he grabbed the rebound and fired again, beating Phantoms goalie Anthony Stolarz. The Wolf Pack got their redemption, taking the 2-1 win during 3-on-3 overtime.

“This was my first 3 on 3 [overtime] experience,” Malone said after the game. “I’m pretty proud of myself.”

The coaches had high praise for Malone too, with assistant coach Jeff Beukeboom mentioning post-game, how “great of an addition to the locker room” Malone has been.

The Wolf Pack will be back home again Friday, December 26 to play the Springfield Falcons.