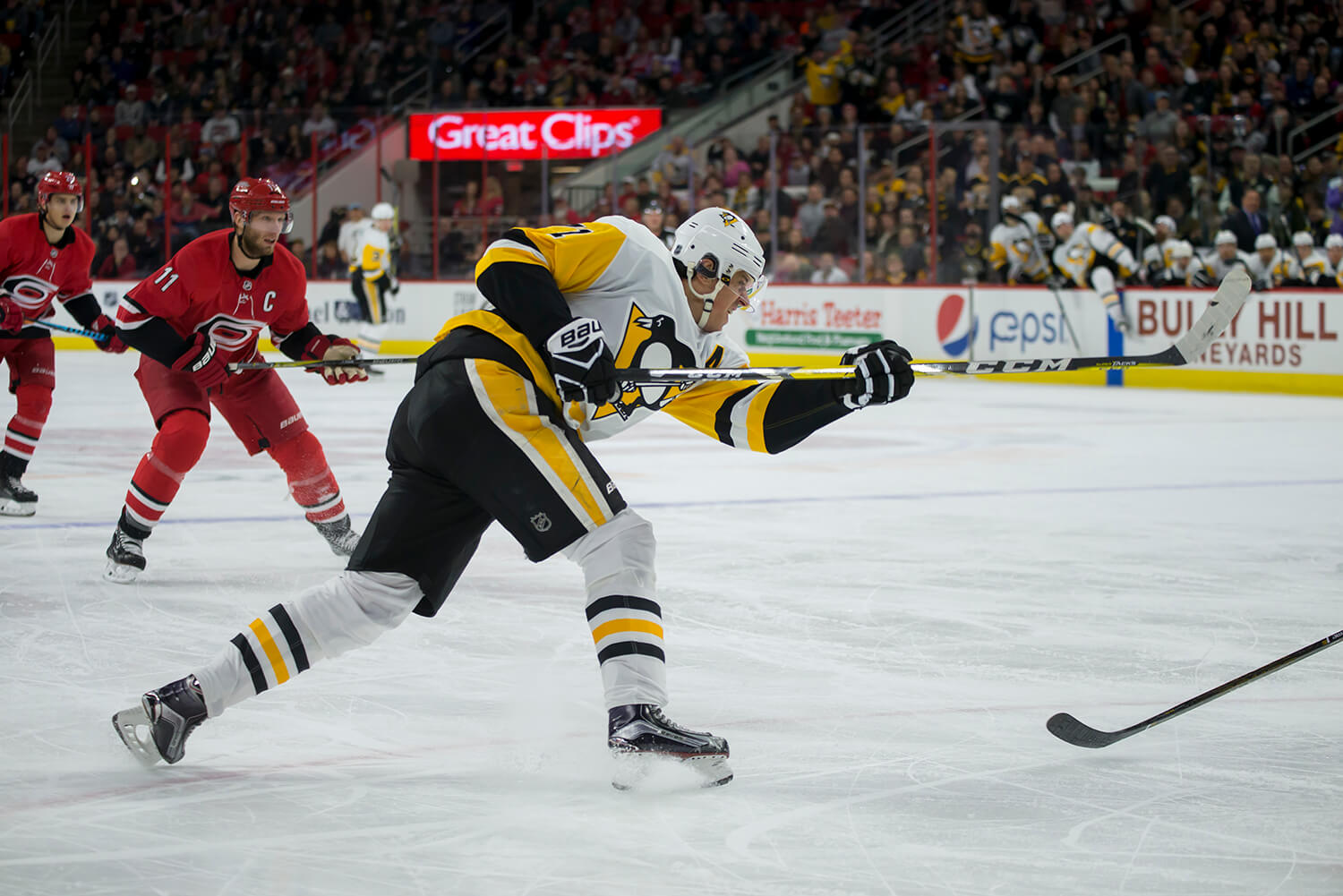 EVGENI MALKIN (71) puts a shot on goal during the first period of a game against the Carolina Hurricanes. The Hurricanes beat the Penguins 2-1 in Regulation.

The Pittsburgh Penguins are blessed with world-class talents like Sidney Crosby, Evgeni Malkin, Phil Kessel and Kris Letang. It’s also something of a curse.

The Stanley Cup is not just the goal; it’s the expectation. The Penguins are defending, back-to-back champions, but anything less than a threepeat this June will be considered a failure – to the players, coaches, front office and fanbase alike.

After a very ordinary, 19-17-3 start to the season, the Penguins are trending upward as they head down the stretch. Since Jan. 1, they’re the league’s best team with a 15-4-1 record and 31 points. They have an 11-game home winning streak, are 8-1-1 in their last 10 and have closed the gap with the Washington Capitals to a single point for the Metro Division lead.

Their best players have led that charge, of course, and none have been better than Malkin. His 33 points (19G, 14A) since Jan. 1 lead the league. He’s also established himself as a serious contender for the Rocket Richard Trophy – his 33 goals are second behind Alex Ovechkin’s 34 – and the Art Ross, where his 69 points are No. 2 behind Nikita Kucherov’s 77.

Malkin’s next-level play could make a case for the Hart Trophy as league MVP, in fact – if only he wasn’t playing alongside other contenders like Crosby and Kessel. As it is, all three might well be overlooked.

“I think there’s a few guys on our team that should probably be getting some buzz,” forward Bryan Rust said. “But I think as long as the team wins, guys are happy.”

The Penguins are winning, and a few players are standing out.

Bryan Rust – Since returning from injury in late January, Rust has 12 points (5G, 7A) in 11 games. He’s done that in roles up and down the lineup, looking equally comfortable as a fourth-line energy guy as he does on a line with Malkin and Carl Hagelin that showcases the Penguins’ speed.

“He’s a guy we can use up and down the lineup,” said head coach Mike Sullivan. “We can play him on the left side [or] on the right. We use him penalty-killing. If we have to throw him on a power play, we can do that. He’s a real versatile player, and he’s a good hockey player. He plays the game the right way.

“His speed is obviously his biggest asset, and he can utilize that on both sides of the puck. To have a guy like Rusty on our bench, from a coach’s standpoint, gives you a certain comfort level because we can use him in so many situations.”

Carl Hagelin – Hagelin is one of the NHL’s fastest skaters, but that wasn’t helping his hands in the first part of the season. Through 36 games, he had just six points (2G, 4A) and was converting just 2.8 percent of his shooting chances. Hagelin noted that he’s a different player after Christmas, though, and the Penguins must be thankful they didn’t heed calls to sell low on him in the early going. He’s notched 15 points (5G, 10A) in just 23 contests since the holiday, converting shots at a 10 percent clip.

Whether it was exhaustion – since Hagelin entered the league in 2011-12, no one has played more playoff games – or frustration, keeping at it was the key. “I think it’s a matter of just working hard,” he said. “Keep doing the right things, and the points will just come.”

He’s helping the points come for Malkin, too.

“What Haggy and Rusty do is, they create that north-south game for Geno,” Sullivan said. “I think Geno’s more inclined to shoot the puck when he plays with those guys, and that’s when we think he’s at his best. Those guys are conscientious at both ends of the rink and, if they get caught in the offensive zone, both of them have the opportunity to catch the rush. They’ve had some strong games for us.”

Zach Aston-Reese – Recalled Feb. 3 when forward Patric Hornqvist went down to injury, the 23-year-old Northeastern product brings a net-front presence similar to Hornqvist’s, along with good offensive instincts. He’s scored four points (3G, 1A) in seven games, and his presence on Crosby’s wing and steadily-increasing ice time make it clear that the coaching staff likes his game.

They like him so much, in fact, that it’s not hard to picture Aston-Reese sticking around down the stretch, even after Hornqvist returns.

“He’s got a real solid, 200-foot game,” Sullivan said. “He’s strong, he goes to the net, he’s good in the battle areas, he retrieves pucks. He’s good on the wall [and with] his awareness away from the puck. He makes good reads. A power play goal we had, he provides the screen for it; takes the goalie’s sightlines away.

Matt Murray – Murray may have won two Stanley Cups while still a rookie, but he got off to a decidedly average start this season. The 23-year-old netminder had a 15-12-1 record, 2.93 goals-against average and .903 save percentage when he left the Penguins to be with his family in mid-January.

Since returning after the death of his father, James, Murray would surely be making him proud. He’s 7-0-1 and, while that record is partly due to the resurgent Penguins as a whole, Murray’s individual stats have also trended the right way with a 2.60 goals-against average and .922 save percentage since his return.

Murray’s hallmark is his calm demeanor in and out of the net, and he’s back to instilling that calmness in his team.

“He’s really been locked in for the last half-dozen games he’s been in the net,” Sullivan said. “He’s tracking the puck well. An indication that Matt’s on the top of his game is, he tends to make difficult saves look easy. He reads plays so well, he squares up to the puck and he lets the game come to him. The puck just hits him. I can see from the bench the comfort level that he has.”

With seven weeks remaining in the regular season, the Penguins are back to looking like a well-rounded Stanley Cup contender. That includes Riley Sheahan, whose play at the No. 3-center spot may have caused GM Jim Rutherford to shift his trade-deadline approach from a need to fill that position to a focus on increasing overall depth.

“We’re just trying to stay focused on the task at hand,” Murray said following Saturday’s impressive, 5-3 win over the Toronto Maple Leafs, a contender in their own right. “If we take care of our business and do what we need to do, we have a chance to win night in and night out. That’s a really good team over there that we just beat. A lot of positives tonight.”