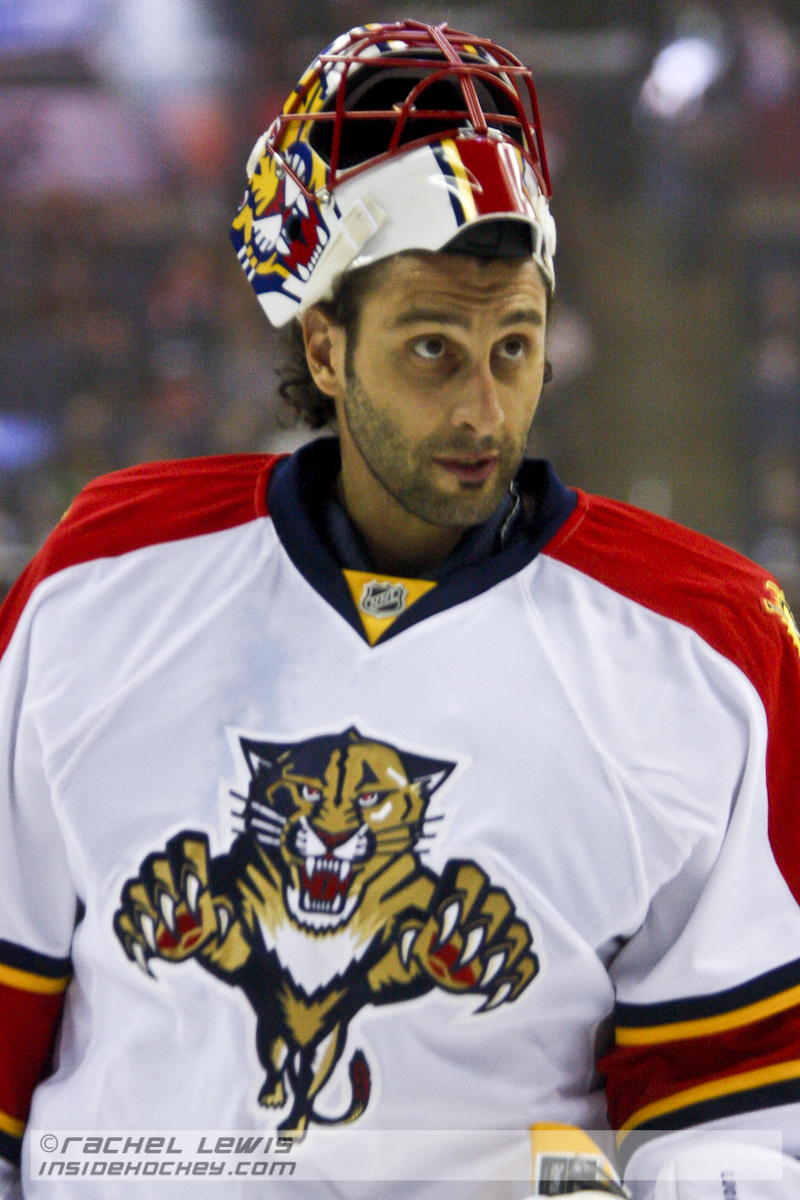 Roberto Luongo of the Florida Panthers.

NEWARK—Roberto Luongo made 28 saves in his return to the lineup, a 3-0 shutout versus the Devils on Monday night.

The Panthers, who defeated New Jersey in the two prior contests this season—both in overtime, entered the Rock looking for the season sweep and a chance to right a season that hasn’t exactly gone according to plan following a franchise-best 103-point season a year ago.

They were gifted with an early opportunity in the game when Pavel Zacha boarded Denis Malgin. Zacha was assessed a five-minute major on the play. Malgin would skate off under his own power but did not return to the game.

The Devils nearly survived the extended power play, but with 22 seconds remaining on the man advantage Reilly Smith cashed in on his own rebound after a Vincent Trocheck dump-in took an opportunistic bounce to help open the scoring at 16:55 of the first period.

Despite having some good looks on a pair of power play opportunities in the middle period, New Jersey failed to convert an equalizer. Surrendering two penalties of their own in the third ultimately killed whatever offense could be mustered up by a team that has struggled to find offense lately.

Florida’s one tally over Schneider was all it took as the Panthers would tack on two more goals on an empty net from Jussi Jokinen at 18:55 and Vincent Trocheck at 19:44 of the third to triple their lead.

The shots were nearly even finishing 29-28 in favor of Florida, but Luongo liked the kind of shots he faced in this game.

“Whatever they had was mostly from the outside—I kind of like those games,” he said.

He was impressed with his teammate’s effort on the night, but said he could feel some of rust after missing two games.

“I was a little bit rusty in the first period,” he said. “I wasn’t moving as well in the crease and got lucky on a couple of shots….the boys did a great job in front of me.”

Keith Yandle, who recorded an assist while logging almost 23 minutes to lead all defenseman on the night wasn’t as modest about the work of his goaltender.

“He’s been amazing every night,” Yandle said. “He gives us a chance to win every night.”

Smith, who recorded the game’s only goal versus an NHL netminder was happy with the bounce-back effort following a 4-0 home loss to Boston over the weekend and noted the injury-riddled team has to be “stingy” in order to win games.

“We were stingy for pretty much the whole game,” he said. “We need more of that in the future.”

Schneider, who made 27 saves on 28 shots, wasn’t dissatisfied with the defensive effort even while the team shouldered a third-straight game without captain Andy Greene.

“Obviously, Andy is a big part of this team, but for right now we just move on without him and hope he gets well soon,” Schneider said. “I thought defending was a good, strong suit of ours tonight.”

Head coach John Hynes said Greene will accompany the Devils on their upcoming road trip but did not specify any further on their plans with him. He didn’t decline the possibility of a “shake up” following a third-consecutive loss at home.

“We’re going to try everything we can to be able to play better and get ourselves an opportunity to be more successful,” he said.

What that is? Hynes didn’t object to the possibility of an AHL callup or two ahead of their first contest of their road trip, which begins Thursday night in Edmonton. Exactly who that might be? He didn’t clarify. But Hynes seems clear on what the team needs to do better.

“We have to generate more offensive pressure,” he said. “I think our volume has to be higher–our shot totals have to go up, our offensive zone and sustained pressure has to be better. We don’t have line after line playing in the offensive zone…It’s more of a mindset and work ethic.”

New Jersey will put it’s work ethic to the test on Thursday for their second meeting withe the Oilers in less than a week, after falling 2-1 in overtime on Saturday in Newark.