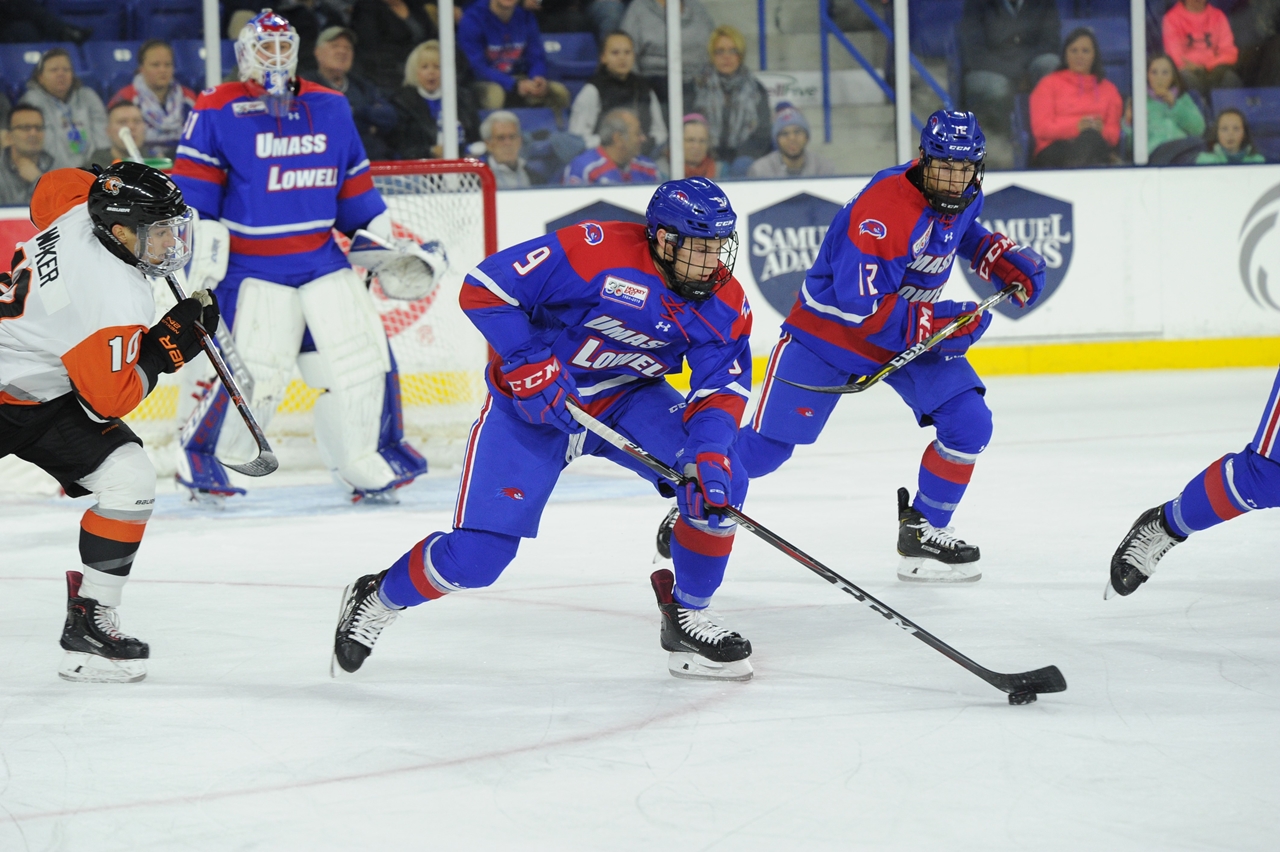 Boston, MA- Boston University carried their roller coaster habits from the last few seasons into the 2021-22 season’s first weeks. The Terriers piled up eight goals last week to beat the Merrimack College Warriors last weekend; and when UMass Lowell entered Agganis Arena on Friday night, the Terriers couldn’t get one goal on the board.

Before the game, BU honored Travis Roy on the one year anniversary of his death. Both the Terrier and RiverHawk teams entered the rink to no music or fanfare from the bands and to a respectful Agganis Arena crowd. BU played tributes to the tragic and heroic Roy throughout the game, but didn’t get the desired result.

Andre Lee set the tone when he got behind the defense and deked out BU goalie Drew Commesso 7:49 into the game. Mid-way through the second, the LA Kings draft pick buried an excellent Jon McDonald scoring chance to make the game 2-0. And in the late minutes, Lowell generated a rush on which senior Reid Stefanson snuck a shot through Commesso’s legs for his second goal of the season.

At the other end, RPI transfer Owen Savory stopped 29 Terrier shots to secure a final score of 3-0. The shutout is Savory’s first as a RiverHawk, and seventh of his collegiate career split between Troy and Lowell.

Andre Lee ended his night with points on all three goals, with two scores and an assist. He also closed the night out blocking shots when BU pulled their goalie.

“He’s developed into a great complete player,” Lowell Head Coach Norm Bazin noted about the junior from Karlstad, Sweden. He added about Lee’s line with Carl Berglund and Reid Stefanson “They’re effective when they keep it simple. They were impressive tonight.”

“BU did a great job honoring Travis,” commented Terrier Head Coach Albie O’Connell, “I wish we played better on a night like tonight.” Albie elaborated: “There were some positives but it wasn’t good enough. We went individual. There was some mindless hockey that went on there and that’s frustrating.”

The teams take their home-and-home up to Tsongas Arena for a Saturday night rematch. Puck drops at 6:05 PM ET.