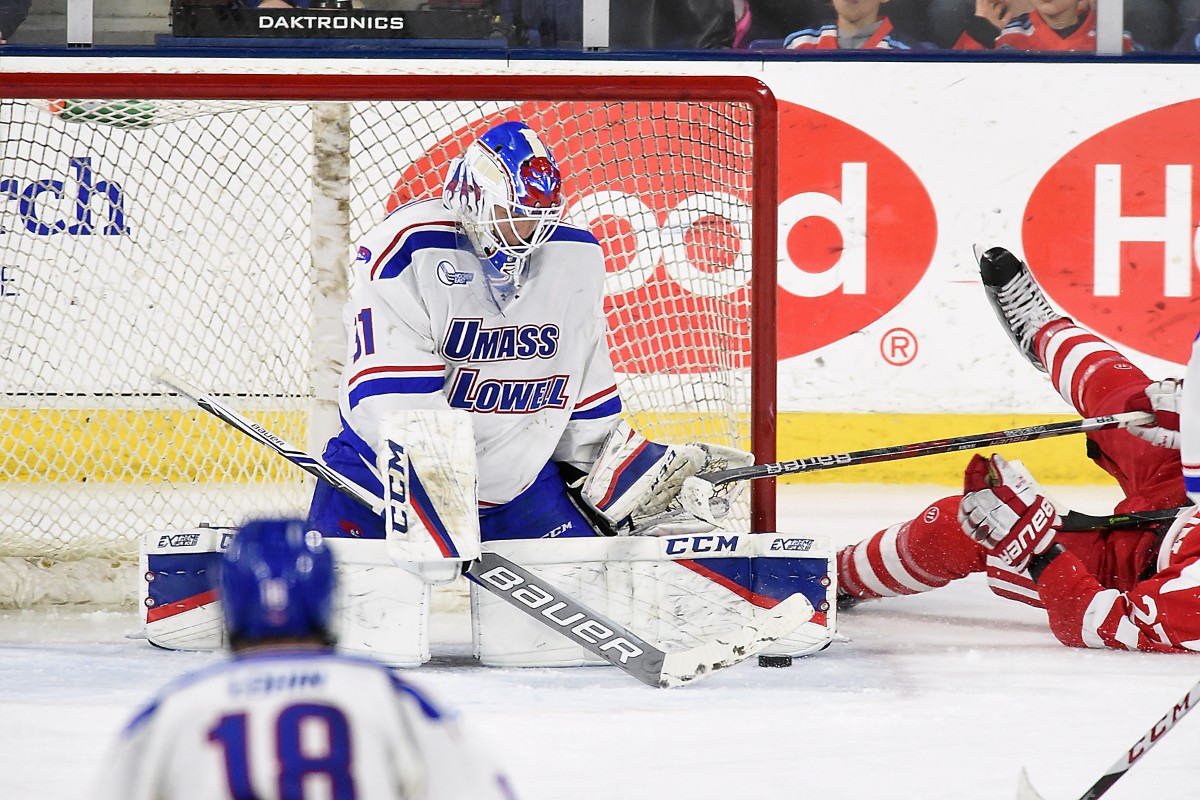 The Boston University Terriers and UMass Lowell Riverhawks have disappointed this season. Both were ranked in the preseason top 5, and both are now in the “Others Receiving Votes” category.

Lowell has turned their season around after an 0-3 start and a goalie change. Christoffer Hernberg led the Riverhawks to a 5-2 November record and is in the top five for both save percentage and goals allowed average. BU’s offense has kept them in games,  The teams met at the Tsongas Center for the front end of a semester ending home and home on Friday night.

BU got the early jump, scoring on their first possession of the game. Brady Tkachuk got infront of Hernberg and put in a rebound for a 1-0 lead only 42 seconds in. That was the last shot BU took until the final minutes of the period.

Lowell controlled the rest of the frame, outshooting BU 9-5 for the period and 9-2 until a BU power play in the last two minutes of the period. In the meanwhile, Lowell tied the game on a power play of their own.

The Terriers were caught with too many men on the ice. Chris Forney fired a shot from the right circle and Jake Kamrass tipped the puck in from the slot. BU swing the game following a Nick Master boarding call 1:12 before the end of the period, but could not untie the game before the intermission.

BU’s offense carried momentum into the second period. Drew Melanson netted the puck only 36 seconds into the period for his first goal as a Terrier. After claiming the lead, BU continued pounding Herberg trying to extend the lead.

Shane Bowers had the best chance, with a backhander from the doorstep. Hernberg slid across the goal line on his chest and stopped the puck only centimeters from the goal line. The crowd applauded his efforts. Hernberg made 10 if his 24 saves and kept the score 2-1 going into the third period.

BU lost their composure in the third period and Lowell capitalized. Early in the period, Chase Phelps took a hooking penalty. A minute into the power play, Brandon Hickey hit Jake Kamrass into the boards. Kamrass lay on the ice for a minute while the trainer worked with him. He eventually skated off the ice and would not return to the ice. Hickey was called for a two minute cross checking minor, instead of a major for contact to the head.

On the ensuing five on three power play, Chris Forney ripped a shot from the high slot and tied the game 4:41 into the third.

Lowell kept up the pressure on the Terriers and got a fortunate bounce four minutes after the equalizer. Ryan Collins took the puck at the left half boards. He fired a shot on BU goaltender Jake Oettinger, who made the initial save. The puck bounced to the left and deflected back to the open net off Brien Diffley’s skate. Lowell took a 3-2 lead and kept that lead behind timely Hernberg saves and BU penalties.

The Terriers were called for four of their eight penalties in the final frame and their momentum stalled. They still got ten shots on Hernberg, including some great looks with the goalie pulled. Patrick Harper had the best chance, but he missed that look and Hernberg made all ten saves.

Lowell cleared the puck and BU’s frustration boiled over. Brady Tkachuk and Tyler Mueller traded punches in a hockey fight after the final buzzer. Tkachuk was guided directly to the locker room while his teammates shook hands with Lowell, congratulating them on a well earned 3-2 victory.

With the loss, BU falls to 7-10-1 overall and 5-6-1 in Hockey East. Head Coach David Quinn was furious about the game, but focused on getting ready for Saturday.

“We did not capitalize on our chances. We can’t take penalties while we’re killing one off. It’s unreal what goes on and doesn’t get called and the crap that does. We’ll get ourselves ready for tomorrow.”

The Riverhawk’s record rises to 9-7-0 overall and 6-5-0 in conference. As a result, Lowell leapfrogs BU and UConn into sole possession of fourth place in Hockey East. Norm Bazin was happy with the win and complimentary of his goaltender especially.

“He made some monster saves. They were ahead and had a chance to get an insurance goal and Chris stopped them. We needed him tonight.”

Hernberg continues his stellar junior season with his ninth victory in eleven starts. Senior Alternate Captain Chris Forney recorded his second multi-point game of the season with a goal and an assist.

The teams complete their home and home with a matchup at Agganis Arena on Saturday night. Puck drops at 7pm. This will be the last game of the semester for both sides. BU does not hit the ice again until January 5th, with an exhibition game against the U.S. Under 18 Team. Lowell will sit for exams after the weekend then take part in the Catamount Cup in Burlington, VT, on December 29th and 30th.