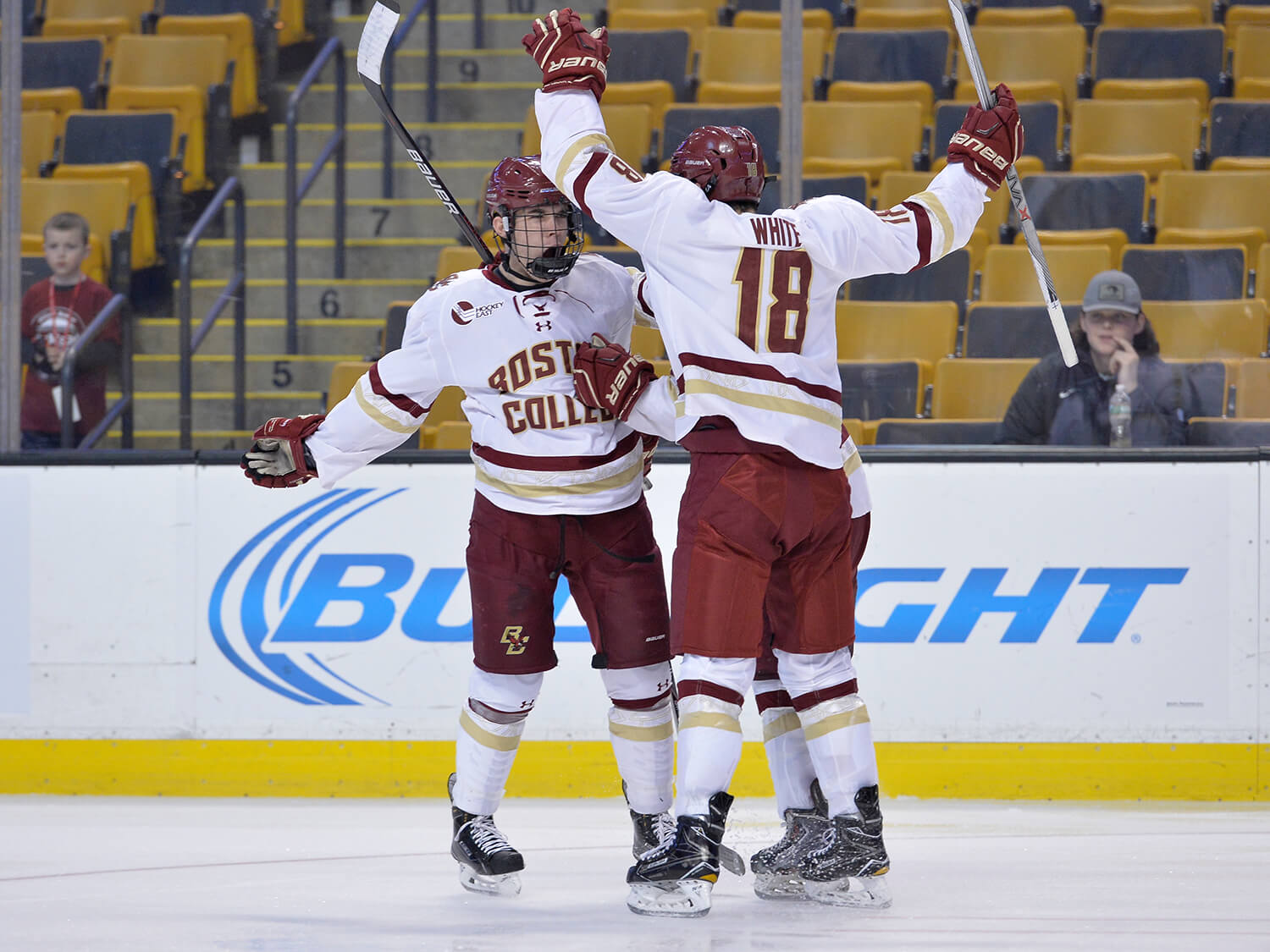 At the start of the night, the 14th ranked Boston College Eagles were in prime position to claim the Hockey East Regular Season Championship. All they had to do was beat the 5th ranked UMass Lowell Riverhawks and get some help from Notre Dame the next night and the title would be theirs. That plan was derailed at Conte Forum as the teams battled evenly through the first 41 minutes of play; then Lowell dominated the last 19 minutes, beating the Eagles 4-1 in a needed road game.

The first period was a scoreless war that BC controlled on the defensive end. The Eagles blocked nine shots and got lucky with a Riverhawk shot clanging off the post. Lowell held firm too, blocking five shots and holding up the Eagles offense.

The goaltenders, Lowell’s Tyler Wall and BC’s Joseph Woll made nine and ten saves in the period respectively. The teams ended the first period scoreless.

The second period started almost painfully slowly. Both teams struggled to get the puck moving and looked like they were moving through molasses. After the first five minutes, the teams picked up the pace. The Eagles had a chance on the power play at the halfway point of the second period, but Ryan Fitzgerald was called for a roughing penalty. They then turned it over on their blue line. Fortunately, Joseph Woll made two incredible saves to keep the game scoreless.

Unfortunately for the Eagles, Lowell got a chance on the power play and made the most of it. Good puck movement produced a shot and a goal from Chris Forney with only 2:46 left in the period.

BC got another chance on the power play before the horn sounded, but failed to capitalize. Lowell led 1-0 at the second intermission.

The Eagles came out firing in the third period. Only 25 seconds into the period, Austin Cangelosi scored to even the tally at 1-1. Mere seconds later, the Eagles put more pressure on Tyler Wall, but he did not budge. Wall made nine of his 28 saves in the third period and shut out the Eagles the rest of the way.

The Riverhawks took off behind the sterling offensive play of their top line of C.J. Smith, Joe Gambardella, and John Edwardh. Only three minutes after Cangelosi’s goal, Gambardella scored to put Lowell back ahead. After half a period’s worth of play, Smith netted a goal with assists from both his linemates.

Three minutes later, Gambardella created a turnover and a one man drive, scoring off a putback backhander for his second goal of the game. That capped the scoring for the night.

Riverhawk coach Norm Bazin praised his team’s offensive performance in the third and sang the praises of his high-powered top line.

He added that “Lowell competes for championships too, not just BC.”

With the victory, Lowell moved into a points tie with Boston University, still trailing the Eagles by two points for the top spot in the standings. BC, Lowell, BU, and Notre Dame all have scenarios which could see them claim at least a share of the Hockey East regular season crown.

The Eagles and Riverhawks will faceoff tomorrow night at the Tsongas Center in Lowell at 8:30 for the final regular season game for each team.