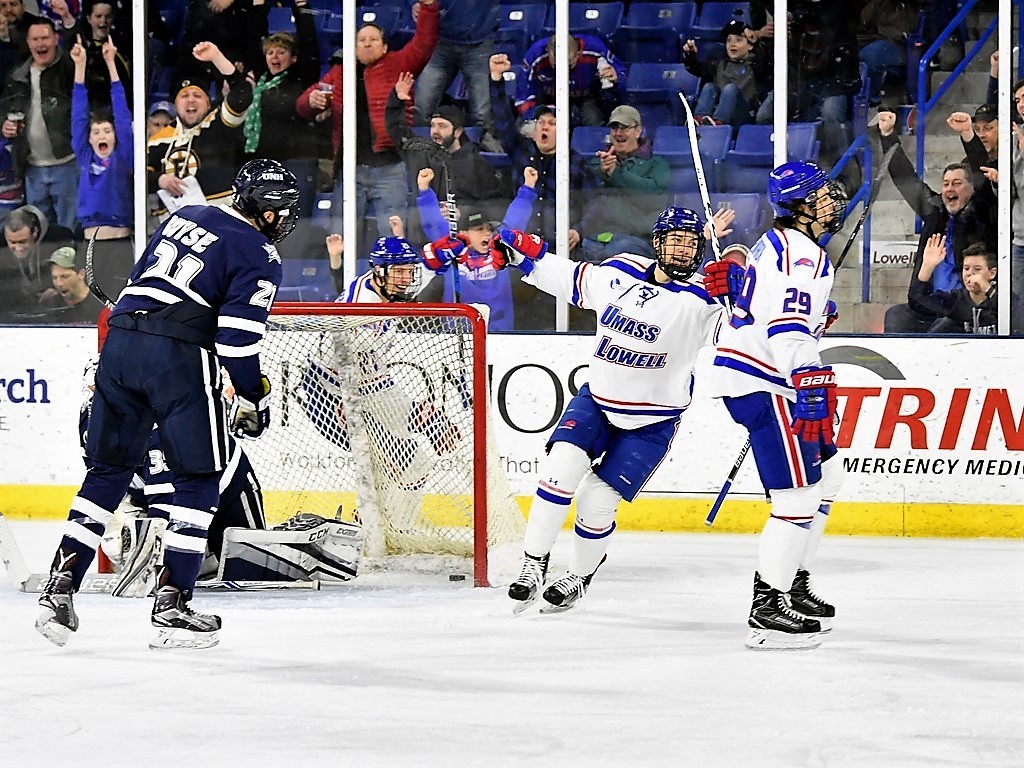 Notre Dame looked to end their tenure in the Hockey East by playing for the conference championship. Unfortunately, they had to beat the UMass Lowell Riverhawks, a team that has been to the Hockey East Title game four years in a row and they wanted a fifth chance for the crown. Notre Dame ran into a buzz-saw and couldn’t summon the offense, defense, or luck on St. Patrick’s Day to topple the Riverhawks.

Lowell opened up the game in dominating fashion, outshooting the Irish 13-3 in the opening frame. Notre Dame goaltender Cal Petersen performed well in net for the Irish, keeping his team afloat. A gift goal gave Notre Dame an early lift. Jack Jenkins dumped the puck in on Tyler Wall from his blue line. The puck was tipped up on a chip in the ice and went by Wall at the seven-minute mark to give Notre Dame the lead.

After that, the game completely belonged to Lowell. Twenty-five seconds after the lucky Irish goal, Lowell’s fourth line netted the equalizer. Colin O’Neill tied the game on a smooth shot from the high slot. Two minutes after that, Ryan Lohin put home some excellent passes from his defensemen to give Lowell a lead they would never relinquish.

The Irish started the second period with a flurry of shots, almost scoring the tying goal. Tyler Wall stood strong and Lowell responded with more offense of their own. CJ Smith took a shot from the right circle and buried it after his linemates got him into position to score. As the clock hit the final minutes of the period, Michael Kapla upped the lead to 4-1 on a left circle shot. Lowell won the shot total again, 17-14, and had taken Notre Dame’s best punch. They stood 20 minutes away from their fifth consecutive championship game.

Notre Dame did not have the firepower to climb back from down three. They only got 3 shots in the third period, tying for the second-fewest in semi-finals history in the Hockey East, and surrendered one last goal to Nick Marin to end the scoring. Cal Petersen did make 36 saves in the game, but he could not get the offensive help needed to force overtime or win. Tyler Wall only faced 20 shots and made 19 saves, with 14 of those saves coming in the second period and the Riverhawks won by a 5-1 final margin.

Both coaches were complimentary of each other after the game, with Notre Dame’s Jeff Jackson disappointed that this was his final game coaching in the Hockey East conference. Notre Dame will likely play in the NCAA Tournament, so it was probably not the final time this unit will take the ice this season. Norm Bazin praised his team, especially his freshman fourth line, for their efforts and strong performance in the victory. They will play in their fifth consecutive Hockey East Championship game on Saturday night against either Boston University or Boston College.